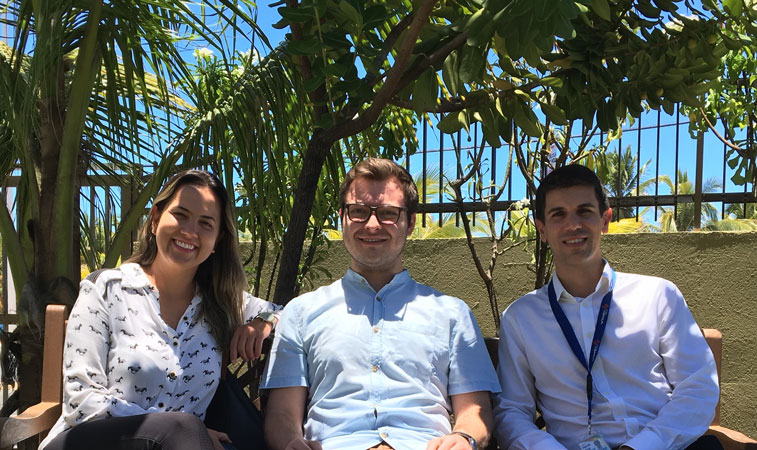 Salvador Bahia Airport handled 8.09 million passengers in 2018, a 4.6% rise over the previous year, with 2018 being the first year in which the airport was operated by VINCI Airports. To find out more about the airport’s developments since the concession of the airport was taken over by VINCI, anna.aero’s Assistant Editor Jonathan Ford (centre), travelled to Brazil to talk with the airport’s Airline Marketing Manager Graziella Delicato, and CCO Marc Gordien.

Salvador Bahia Airport in Brazil officially came under control of VINCI Airports on 2 January 2018, having initially signed the concession agreement on 28 July 2018, covering operation, maintenance and extension-upgrading of the existing terminal and runway system. Last year the airport handled 8.09 million passengers, representing a 4.6% increase in traffic over the previous year. 2018 also saw the airport handle 81,470 aircraft movements, an increase of 6.3% versus 2017.

Sitting on the North East coast of Brazil, the airport serves the city of Salvador Bahia, a destination which  has an energy and atmospheric beauty that few global cities can match. Salvador is the pulsating heart of the Afro-Brazilian community in the country, with it being the largest African city outside of Africa. While there, anna.aero learnt of the destination’s great and diverse industries, its culture and its international growth, with not only people wanting to visit, but also the growing demand from Salvador residents exploring the world. “40% of passenger traffic is outbound demand,” comments Marc Gordien, CCO, Salvador Bahia Airport to anna.aero. “The Brazilian market is picking up, and Salvador’s diverse economy shows this. We are the leading economy in North East Brazil, the fourth largest city in the country, and our catchment is home to 10 million inhabitants.”

Carnival boom and reasons to visit

One of the key characteristics of Salvador is that it is home to the largest street party in the world, Carnival, according to Guinness World Records. It lasts for one week and over three million people descend on the city over the days to party. The city is located at the start of the Bay of All Saints, known for its beaches, coral reefs and tropical vegetation. It is also the largest bay in Brazil. Overall, the city welcomes 3.7 million tourists during the summer season according to the city’s tourism board.

“The European market continues to prosper from Salvador, and last year traffic between Salvador and Europe increased 15% year-on-year,” comments Gordien. “The same too can be said of the North American market, with it seeing a 27% year-on-year increase in passenger numbers last year.”

The airport’s top unserved intercontinental market is Paris, and data using OAG Traffic Analyser shows this. An estimated 30,900 passengers travelled indirect between Salvador and Paris between November 2017 and October 2018, with the market having grown by nearly 19% versus the previous 12-month period. “Paris has a larger O&D market than Madrid from Salvador, yet there is no direct service,” informs Gordien. Presently Air Europa connects Salvador and Madrid. In 2018, over 77,300 passengers flew between Salvador and Madrid on Air Europa’s service according to statistics from Aena. Roughly 72% of these passengers connect onto another service in the Spanish capital. Along with Madrid, Lisbon is directly connected to Salvador with TAP Air Portugal. 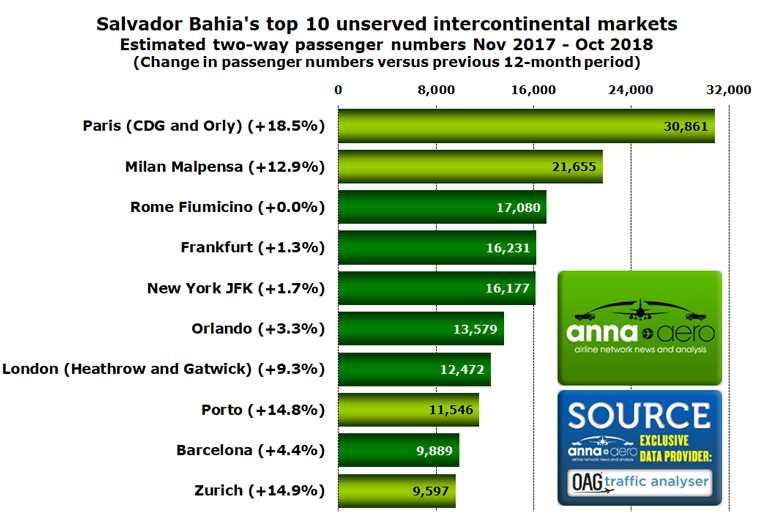 However, it is not just Paris which is a market seeing strong growth from Salvador, with four of the top 10 unserved intercontinental markets (highlighted in light green) seeing double-digit growth, while no markets encountered a drop in demand. Apart from Orlando and New York JFK, all other markets within the top 10 are located in Europe.

Successful 2018 to continue this year

2018 markets a record-breaking year for Salvador Bahia Airport, handling 8.09 million passengers. “We greeted seven new routes in 2018,” comments Gordien. Last year the airport welcomed the arrival of Copa Airlines, which began a twice-weekly, year-round service from Panama City. Another new route was started by LATAM Airlines, which commenced long-haul operations to Miami, a route which operates weekly. MIDT data shows that this market handled close to 23,000 indirect passengers in 2017. “2019 is also shaping up to be a great year, with a record number of people coming to Carnival in the city, while a number of new developments will be opening up in the city, including a new conference centre.” 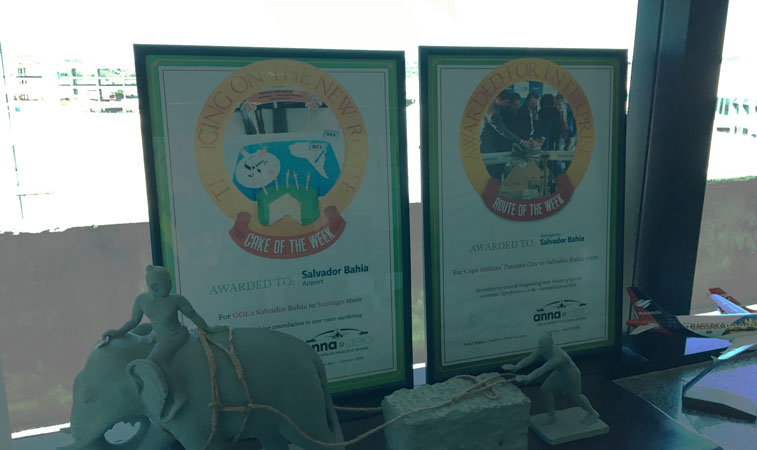 Salvador Bahia’s route network developments in 2018 resulted in it picking up two of anna.aero’s marketing awards, with it collecting Cake of the Week, while Route of the Week was achieved for Copa Airlines’ route from Panama City. The airport’s two awards are showcased proudly in the office, with the new international pier in construction beyond. 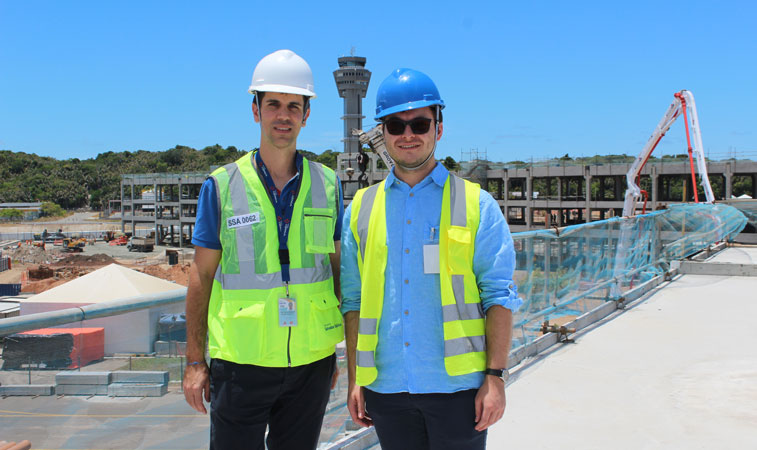 As part of the its redevelopment plan, a brand-new international pier is being built at Salvador Bahia, with Marc Gordien, CCO of the airport giving Jonathan Ford, Aviation Development Editor, anna.aero, a tour of the construction site.

In order to offer a better experience to its passengers and a better service to airlines, VINCI Airports started an ambitious investment plan to modernise and expand the airport. As part of VINCI’s commitment to Salvador Bahia, it is planning to invest approximately $731 million on the airport redevelopment in multiple phases over the 30-year concession period. The first phase of the works, which includes the construction of a new area of ​​20,000 square-metres and refurbishment of the existing terminal, will be completed by October 2019. The investment planned for the first phase of redevelopment is set to cost around $172.12 million.

“Once the first phase of the terminal expansion is complete, our capacity will increase to cope for 15 million passengers per annum,” informs Gordien. The new pier is expected to be partly operational by July, while the airport has also reach carbon accreditation. The airport is also one of the first in the world to see operations with the A330-900neo, with TAP Air Portugal using the aircraft type on some of its services from Lisbon. It too has great public transport access, with their being a metro from the airport direct to the heart of the city. 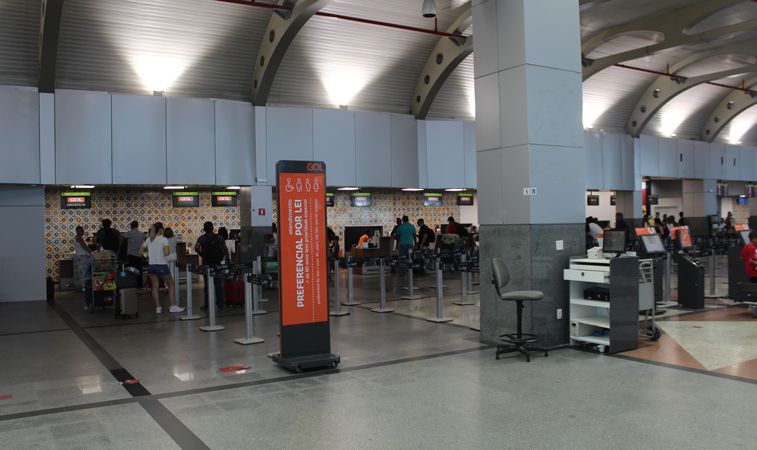 Among the first plans of the redevelopment of Salvador Bahia Airport is a renovated check-in area. It is expected that by August 2019, all positions are in a line format rather than in four separate islands, with the reconfiguration increasing the space available for movement of passengers landside, and streamlines the flow of traffic inside the terminal. Along with the extension to the terminal on the eastern side of the existing terminal, on the western side construction is taking place on allowing for an expanded security search area and departures hall, allowing for more commercial outlets to be opened-up airside, including a walk-through duty-free store. The construction works of the first phase of the modernisation plan for the airport will be completed by October 2019.