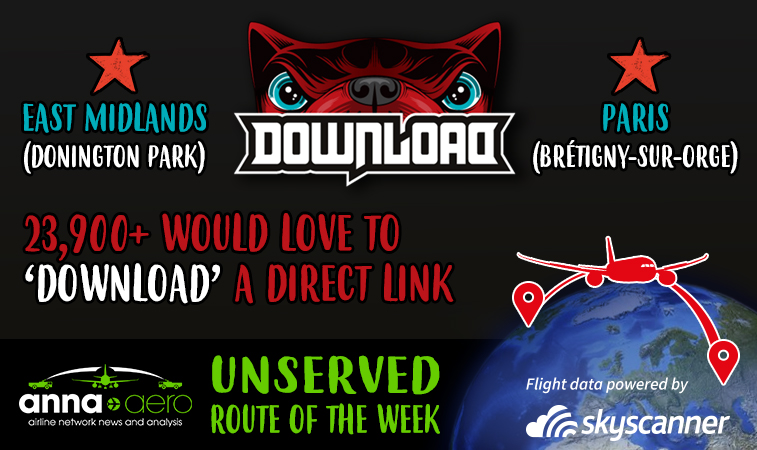 Which airline will ‘download’ this flight plan for their schedule? Between March 2018 and February 2019, 23,900+ passengers searched for a direct flight between East Midlands and Paris. With both destinations being locations for Download festivals, with the UK event attracting up to 80,000 visitors, could an airline look at connecting the two locations? Along with revellers, there is also a strong business demand to sustain a direct flight, along with the potential of two million passengers from East Midlands’ catchment connecting via Paris CDG onto a robust global network.

Data from Skyscanner, one of the world’s leading flight search engines which has 70+ million unique visitors per month, shows that during the past 12 months (March 2018 to February 2019), 29,300+ people searched for a direct flight between East Midlands and Paris.

Looking at the breakdown of data in more detail, it shows there to be a higher demand for the link from UK, with the search split being 89% versus 11% in favour of East Midlands Airport. “There is a point-to-point market demand of 61,000 passengers per year, with 25% travelling for business,” comments Andrew Pelham, Head of Aviation Development, East Midlands Airport. “Not only is there a strong O&D market to be tapped, but our catchment has a connection potential of two million passengers beyond Paris, with East Midlands currently having no hub carrier connectivity.” 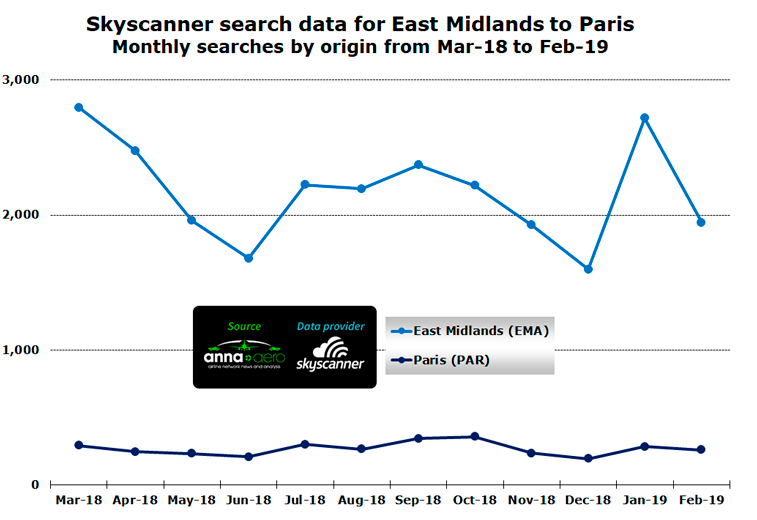 Last year East Midlands handled 4.87 million passengers, making it the largest airport in the UK without a direct service to Paris. UK CAA data shows that 4.50 million passengers travelled between the UK and Paris CDG in 2018, with the market growing 3.7% versus 2017. Of this demand, 53% travelled on services from UK airports outside of London. A further 142,500 flew to/from the UK and Paris Orly in 2018.

The last full year in which a service operated between East Midlands and Paris CDG was 2014, with Flybe having flown the route daily up until mid-January, while Jet2.com then operated a summer service that year from April to mid-September. 2014 saw 18,000 passengers fly the airport pair, with Jet2.com having offered a four times weekly service. Up until the end of S13, Flybe offered a 12 times weekly operation on the route using Q400s, with a twice-daily service mid-week. In 2013, UK CAA data shows that 48,600 passengers flew between the two airports.

“The historic data from when bmibaby flew the route shows that the market can sustain 135,000 passengers a year,” informs Pelham, with this confirmed by UK CAA data for 2007. The route also sustained 121,000 passengers in 2008, showing that the market can easily cater for over 100,000 passengers a year. “Along with the connection potential, we also support a market catchment of 10 million passengers within a one-hour drive time, with many people within our core catchment travelling to other airports for a direct service. As East Midlands is their local airport, it is our priority to fill this gap to allow them to fly from here to Paris and beyond. We know from customer feedback that passengers in our region would choose to fly from East Midlands if this route was offered, so we have a great opportunity to capture the Paris demand.”

Given the criteria of the market, it makes sense for a hub operator to tap into this potential city pair. Due to the strength of its network, a likely carrier to serve this market is Air France, or a regional airline partner carrier of the airline. It is no stranger to UK regional airports, with it connecting Paris CDG with Birmingham, Manchester, Edinburgh, Newcastle and Aberdeen outside of London, with the latter handling less passengers per year than East Midlands. It also has partners which operate into a number of other UK regional airports. To support the case more, Air France is the largest airline in the UK-Paris market, accounting for 37% of annual seats last year. Of course this would not only cater for point-to-point demand, but opens up East Midlands to a global network via CDG. “We have access to two million passengers in our catchment that can support the potential of connections beyond Paris,” informs Pelham.

When referencing OAG Traffic Analyser data, the top five most popular connection destinations for Air France customers from the UK via CDG are Beijing, Lagos, Johannesburg, Tokyo Haneda and Nice, with this showing the global connections that a hub connection would open up for the 10 million people living within one hour of East Midlands airport, including the cities of Nottingham, Leicester and Derby, with the former two themselves supporting core populations of over half a million people each, with both cities centres being within a 30-minute drive of the airport.

About this anna.aero analysis and Skyscanner data
“Unserved Route of the Week” is a cooperation between anna.aero and the B2B branch of the Skyscanner.net consumer flight comparison site and is a new kind of analysis harnessing an entirely new resource: the amazing power of the aspirational data captured from Skyscanner.net flight comparison site which has +70 million unique visitors per month.