Norwegian opens base at Billund Airport 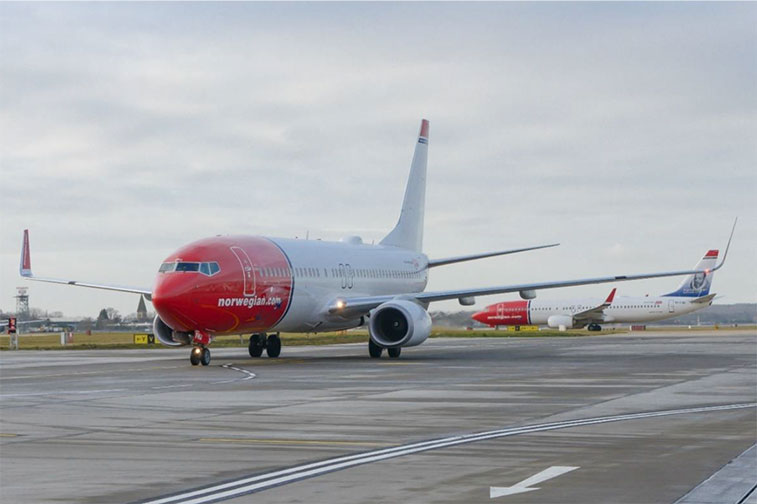 Billund Airport can confirm that Europe’s third largest low-cost airline, Norwegian, opened a new base at the airport on 1 April, stationing a 186-seat 737-800. With this commitment to the airport, Norwegian will open-up eight new destinations. Four of the routes that the carrier will launch, namely Malaga (launched 1 April), Palma de Mallorca (launches 6 May), Ponta Delgada (7 May) and Faro (11 May) will be flown as scheduled services, while the following four destinations of Chania (5 May), Zante (6 May), Rhodes (10 May) and Kos (16 May) will be flown on behalf of Bravo Tours, one of the largest travel agencies in Denmark.

“It is fantastic news that one of Europe’s biggest airlines is basing an aircraft at Billund,” comments Jan Hessellund, CEO, Billund Airport. “As an airport which serves seven cities in West Denmark, we are ecstatic that we are now able to offer more choice to the 2.3 million people in our catchment that will be looking to book a 2019 summer holiday.” Adding further comment, Hessellund states: “With the unfortunate demise of Primera Air last summer, one of the airport’s long-serving airlines, it’s great to see that Norwegian has managed to fill the gap and discover the potential that Billund Airport’s catchment has to offer.” Norwegian’s new operation will add 14 extra weekly departures and contribute over 5,200 weekly two-way seats to the Billund market this summer.

Scheduled flights to Malaga will operate twice-weekly on Mondays and Fridays, before growing to a four times weekly service from 6 May when Wednesday and Sunday rotations will be added. Palma de Mallorca services will operate on Mondays and Fridays, while Faro sees a Saturday departure and Ponta Delgada being flown on Tuesdays. Operating for Bravo Tours, Chania will see three weekly flights on Thursdays, Fridays and Sundays, giving customers options for 7, 10, 11 and 14-night breaks in Crete, while Zante (Mondays), Kos (Thursdays) and Rhodes (Fridays) will all see a weekly service.

Norwegian, which carried 36.97 million passengers in the 12-month period ending 30 November 2018, has been operating from Billund since 2010. Presently serving the airport from Oslo Gardermoen on a year-round basis, the carrier also operates summer-seasonal services to Alicante and Barcelona. It means that in 2019 Norwegian will fly to seven scheduled destinations from Billund, as well as the four destinations on behalf of Bravo Tours.

Billund Airport’s route developments in 2019 include: