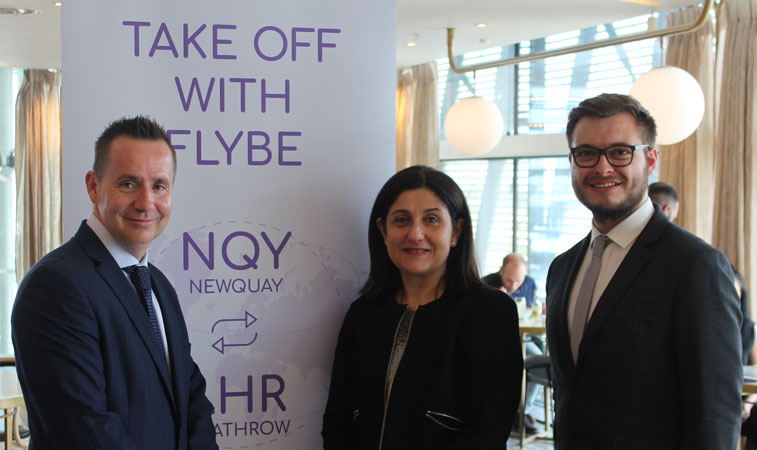 Cornwall Airport Newquay and London Heathrow are now connected with four daily flights courtesy of Flybe, as the route opens up not only direct access to London’s biggest airport, but allows Cornwall to be presented to a new global range of destinations. Pictured at the launch luncheon at London Heathrow’s Terminal 2 on 1 April are: Al Titterington, MD, Cornwall Airport Newquay; Christine Ourmières-Widener, CEO, Flybe; and Jonathan Ford, Aviation Development Editor, anna.aero.

Commenting on the launch from Europe’s busiest hub’s point of view, Ross Baker, CCO of London Heathrow, said at the launch celebration on 1 April: “This route highlights our commitment to domestic connectivity and it is fantastic to welcome this regular service between Cornwall Airport Newquay and Heathrow. Joining our regions to the UK’s major hub airport marks a fantastic opportunity for many, including exporters from Cornwall now connecting to global markets and inward investors, tourists and students from all over the world. Now they can all experience the wonders the region has to offer in a much easier and convenient way.”

Before celebrations took place at Heathrow, a breakfast hosted by the Cornwall Chamber of Commerce took place at the Watergate Bay Hotel. Guests included the local MP for St Austell & Newquay, Steve Double; Cornwall Council’s Geoff Brown, Cabinet Portfolio Holder for Transport; and Malcom Bell, CEO of Visit Cornwall who, together with leading members of the business community, then flew to Heathrow to take part in the second of the day’s celebrations. Flybe’s new route between Cornwall Airport Newquay and Heathrow was launched on 31 March, with the Cornish airport celebrating the new route on 1 April. Heading off to London were a number of business and council leaders from Cornwall who supported and pushed the new route. Before departure, all passengers were flagged on to the aircraft, symbolising the global connections being opened up thanks to Flybe linking Cornwall Airport Newquay to the UK and Europe’s leading hub. Flights on the sector will operate four times daily. 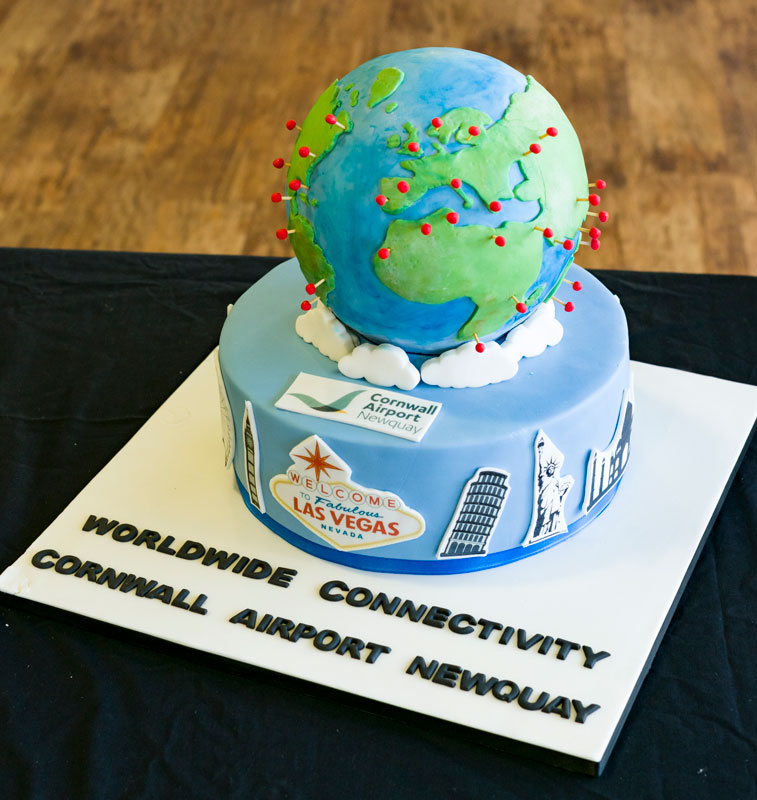 Cornwall Airport Newquay baked what could only be described as an exceptional cake, with it choosing a theme of global connectivity, highlights including Las Vegas, Pisa, New York, Delhi and London itself, adorned around the bottom tier of the creation. All passengers on the first flight on 1 April were offered a piece of the wonder before boarding. Once all passengers were on the aircraft, it was time for them to head for London Heathrow. 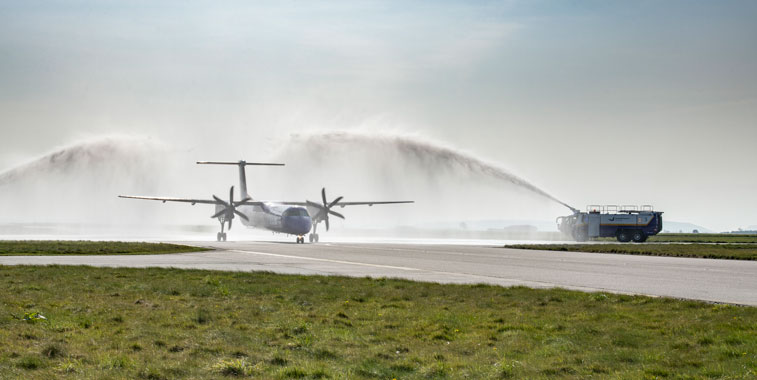 No significant route launch is complete without a water arch salute, and Cornwall Airport Newquay’s finest firefighters gave flight BE 2183 a fine watery send off before it departed for Heathrow. 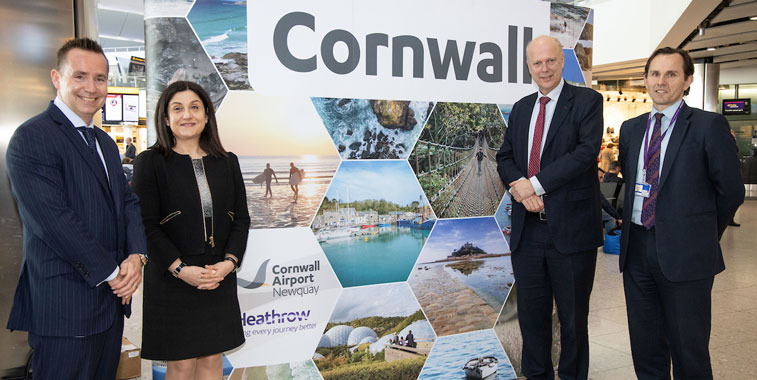 Once flight BE 2183 had touched down at Heathrow, it was time for VIPs to head back through security at Terminal 2 and head for the celebratory lunch for the new route, held at The Perfectionists’ Café, a brand created by renowned chef Heston Blumenthal. Before that however, senior representatives of the delegation visited the pop-up stand celebrating ‘all things Cornish’, while also promoting the new connection to the thousands of passengers flying to international gateways through the terminal that day. Pictured at the stand are: Al Titterington, MD, Cornwall Airport Newquay; Christine Ourmières-Widener, CEO, Flybe; Chris Grayling, Secretary of State for Transport; and Ross Baker, CCO, London Heathrow. 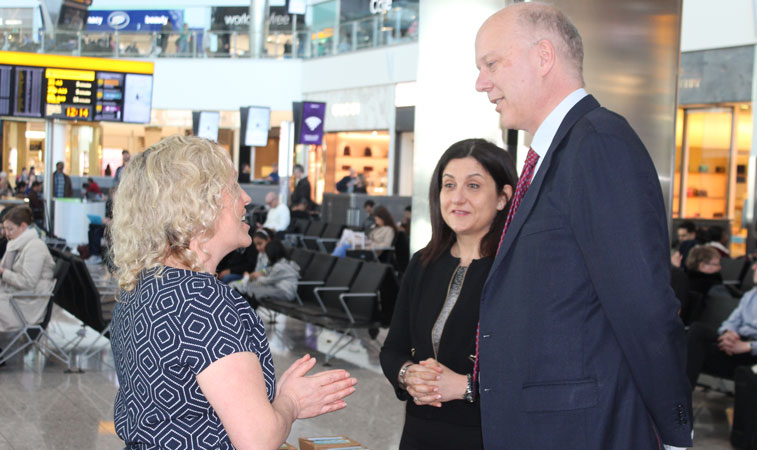 Once official photos had been taken, it was time for Christine Ourmières-Widener, CEO, Flybe, and Chris Grayling, Secretary of State for Transport, to get a sense of what was being promoted about the new route, and indeed the destination of Cornwall, to passengers. Amy Smith, Marketing and Business Performance Manager, Cornwall Airport Newquay, described the delights of Cornwall, and how well the news of the new route has been received by international travellers through the airport that day. Among the gifts to passengers at the Cornwall stand was Cornish fudge. 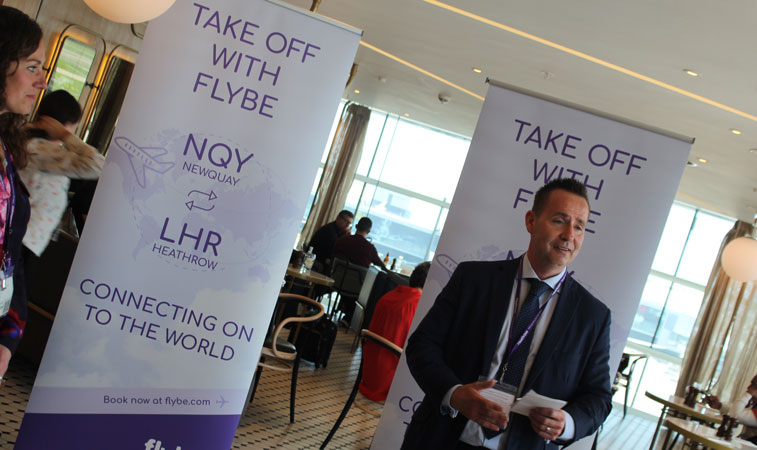 Among the first to speak at the lunch was Al Titterington, MD, Cornwall Airport Newquay. “It’s fantastic that all our hard work to make sure that Cornwall Airport Newquay has direct access to Europe’s busiest hub has finally come to fruition. The worldwide connectivity that this brings opens up a world of opportunity for Cornwall. Now we have direct flights to Heathrow, we will see the strength of Newquay and Cornwall’s brand abroad grow even further, helping to attract more valuable international tourism to our beautiful county,” stated Titterington in his speech to guests. 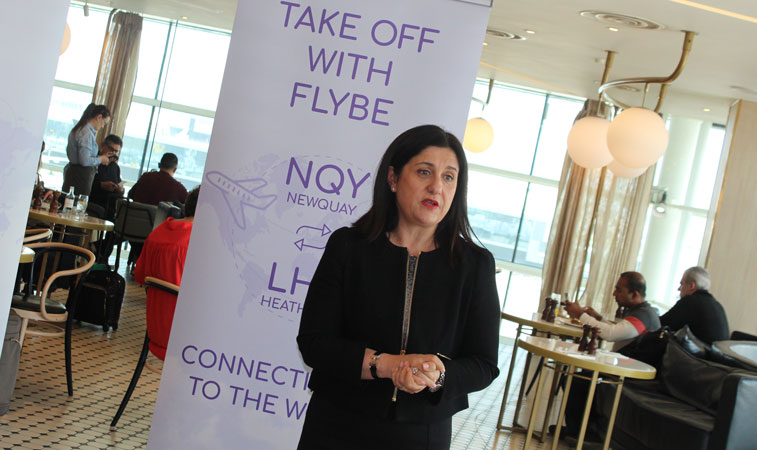 Next to take the floor was Christine Ourmières-Widener, CEO, Flybe. “We are delighted to celebrate with our partners the start of our new Heathrow service from Cornwall Airport Newquay. There has been an overwhelmingly positive response from customers since we announced the route. It offers multiple choices for onward connections to and from the rest of the world from the UK’s busiest airport – and also onto our own routes to Aberdeen and Edinburgh that already exist, plus our soon to launch Guernsey and Isle of Man links.” All five routes will be in operation by the end of April. 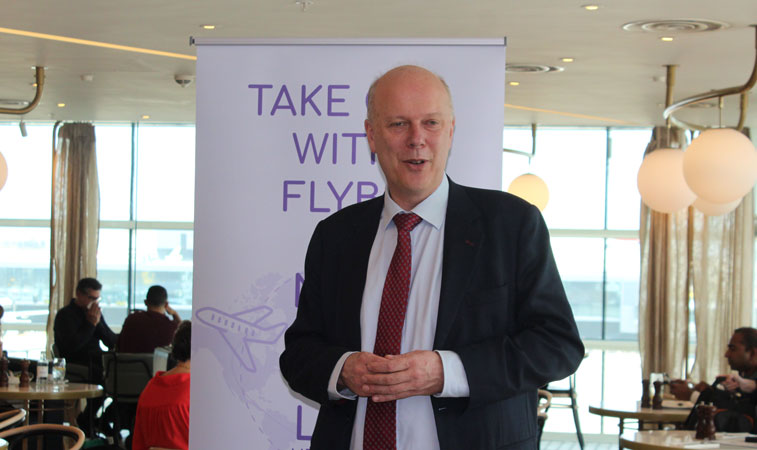 Chris Grayling, Secretary of State for Transport, also took to the floor to comment on the new service. “The new route from Cornwall to our national hub airport offers significant opportunities for local businesses and people, and will help boost tourism across the South West.  It’s great to see this new route launched with help from the government, as we work to build a better connected UK.” The route operates under a Public Service Obligation (PSO). 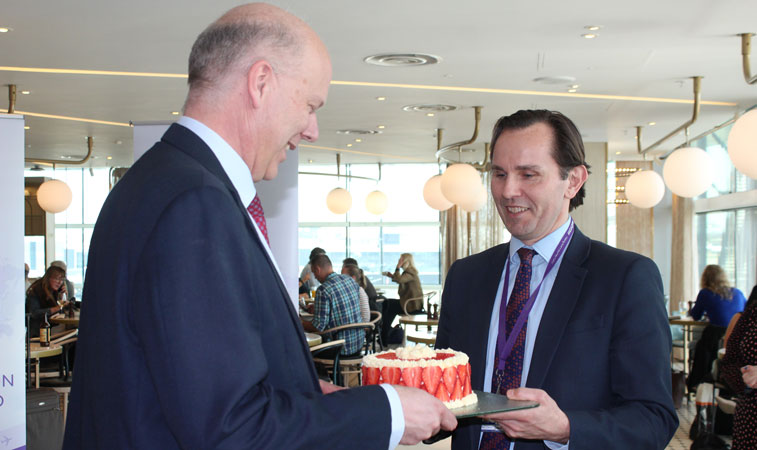 Time for more cake! It was not only a significant day for Flybe, Heathrow and Cornwall Airport Newquay, but the 1 April also marked Chris Grayling’s birthday. To celebrate the Secretary of State for Transport turning 57, Heathrow made him a birthday cake, made of course with the finest Cornish cream and strawberries. Presenting the cake to the minister at the luncheon was  Ross Baker, CCO, London Heathrow. anna.aero would like to thank Flybe, Cornwall Airport Newquay, and London Heathrow for allowing it to take part in the festivities of this new UK connection.