Glasgow Airport – a gateway serving the beating heart of Scotland 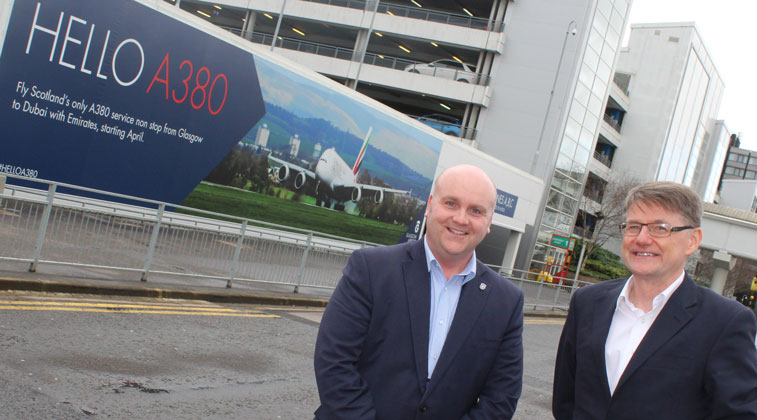 Glasgow Airport is playing a pivotal role in Scottish aviation, with it becoming the first airport in Scotland to see regular A380 operations, with Emirates using the aircraft this summer on its lunchtime service from Dubai. Pictured promoting the new service outside the terminal are Steven Marshall, Head of Airline Marketing & Development, Aberdeen, Glasgow (long-haul) & Southampton airports, and Paul White, Head of Aviation for Glasgow.

Glasgow Airport plays a pivotal role in Scottish aviation, with it handling 9.65 million passengers in 2018, a rise of 31% versus 2013. “Glasgow is Scotland’s largest city, with our metropolitan area offering a population of 2.3 million inhabitants,” comments Steven Marshall, Head of Airline Marketing & Long-Haul Development, Glasgow Airport. “That means our core catchment is centred around 40% of the population of Scotland. Adding to that, Marshall indicated that Glasgow has one of the most youthful populations among Scottish cities. “While our city has a youthful population, with millennials being adventurous and open to travel, there are over 133,000 students in the city, with 10%-15% of this being international students.”

Along with having a large and diverse population within its catchment, Glasgow is also at the beating heart of Scotland’s economy. “Glasgow is responsible for the largest part of Scotland’s GDP, accounting for 39%,” comments Paul White, Head of Aviation for Glasgow. “There are 48,000 companies based in Glasgow, and one recent addition is Barclays which is planning to create 2,500 new jobs in Glasgow. There is a diverse range of industries in the city, with strong links to Life Sciences, pharmaceuticals, financial and the energy sector.”

Further supporting the case to serve Glasgow, visitor numbers to the city and the surrounding area are up, with more people flocking to discover the region. “International visitors to the region grew by 12% in 2017, with 1.24 million overnight stays being recorded. Not only are we a gateway to Glasgow, but we are within easy reach of over 90 golf courses, an array of whisky distilleries, while the city itself always has many events going on. We are also close by to the stunning Isle of Skye.”

One of the biggest developments at Glasgow Airport this summer is the arrival of Emirates’ first full-schedule of A380 operations, with the carrier introducing the aircraft onto its lunchtime service from Dubai. “16 April is the first day of service with the aircraft, with it being flown daily until the first week of October,” informs Marshall. “There has been a lot of public interest for the aircraft, and this is also reflected in forward bookings. As a number of passengers flying Emirates to Dubai connect onto A380 services into Asia and Australia, this is a game-changer for us in giving our passengers a more enhanced end-to-end product with the airline.” In order to accommodate the aircraft, the airport has invested over £8 million in infrastructure.

Last year over 455,000 passengers flew with the airline from Glasgow, with Bangkok, Lahore, Singapore, Perth and Melbourne being among the top connecting markets for Glasgow-originating passengers according to OAG Traffic Analyser data.

Glasgow Airport is investing for the future! Here is the new three-bridge stand that is being prepared for Emirates’ inaugural A380 flight on 16th April. With Emirates using its three-class A380 on Glasgow services, it means the airport is the best outside of London for A380 service provision. This is due to Birmingham only being a two-class destination (business and economy), while Manchester does not yet boast a three-bridge stand for the A380.

Heading into Routes Europe later this week, the airport has a number of meetings with carriers to talk new business. “Regarding the European market from Glasgow, a number of existing leisure airlines are expanding, including Jet2.com (basing a seventh aircraft this summer) and TUI, but we still see a number of European city gap opportunities, including Scandinavia cities, Vienna and Zurich,” comments White.

Along with European development, the airport is also focused on long-haul, with a number of destinations showing a strong case for a direct service. “While we have direct flights to Orlando and New York, we are still seeing 55,000 and 50,000 indirect passengers to these destinations respectively,” highlights Marshall. Orlando is a big market from Glasgow, with the destination accounting for over 110,000 passengers per year. “Virgin Atlantic will go into their 11th year of operating between Glasgow and Orlando, and in 2019 they will offer more flights, extending the season through to January next year.” Commenting on the airline’s working relationship with Delta Air Lines, which serves New York JFK from Glasgow, Marshall added: “Delta is going into its third year at Glasgow, and they too are stretching their season of flights due to the success of the route, with the partnership with Virgin working really well from Glasgow.” The airline saw an 8% increase in passenger numbers between Glasgow and JFK in 2018, with it achieving an average load factor of 90% for the summer season.

Along with Virgin Atlantic, Thomas Cook Airlines also serves the market between Glasgow and Orlando, with this airport accounting for 88,000 passengers per year. TUI Airways is also in the market, with it connecting Glasgow with Orlando Sanford. It carried over 23,000 passengers in 2018 on the long-haul service, with it seeing a 6% rise in passenger numbers versus 2017.

“Regarding the US, Boston is also a priority and a route we would like to reinstate, with 25,000-26,000 passengers flying there from Glasgow via another airport per annum.” Boston services were last flown from Glasgow in 2007, with the former airline Flyglobespan transporting over 17,000 between Glasgow and Boston that year, with this just being point-to-point demand. “We’re also looking towards opportunities in the East, with Shanghai and Beijing combined accounting for 65,000 passengers per year from Glasgow,” adds Marshall. 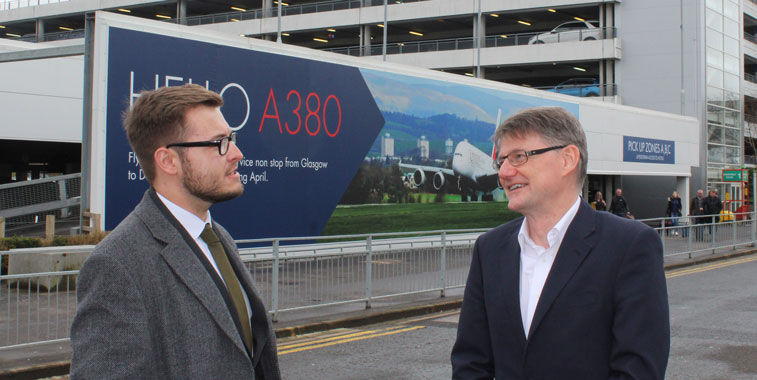 Jonathan Ford, Aviation Development Editor, anna.aero, chats to Paul White, Head of Aviation, Glasgow Airport, about the many route possibilities that are still on offer in Europe from the airport. “Regarding the European market from Glasgow, a number of destinations are well catered for regarding leisure sectors and hub connections, but we still see a number of possibilities, including the Scandinavia region, with Vienna and Zurich top priorities as well,” informs White. One recent development on the European front is Loganair beginning a daily link to Düsseldorf.

“We have a good mix of operators here at Glasgow, ranging from long-haul with Emirates, Virgin Atlantic, WestJet and Delta, leisure operators including TUI Airways, Thomas Cook Airlines, Air Transat and Jet2.com, low-cost including easyJet, Ryanair and Wizz Air, hub carriers Lufthansa, British Airways, KLM and Aer Lingus, plus regional operators along the likes of Flybe and Loganair,” comments White. “Looking ahead on the European front, we see low-cost being the driver of growth, and we could benefit from additional low-cost capacity to fill some routes such as Lisbon and other city destinations.” Low-cost has grown from Glasgow in recent years, with the number of seats operated by LCCs growing by 98% over the last 10 years based on schedule data.

What makes Glasgow an interesting case is that it is a very resilient airport, with its leading airline easyJet, accounting for 22% of seats, and the top five airlines being responsible for 69% of traffic. This compares to 75% at Edinburgh, while the figure is much higher at other UK regional airports. “We see the market being tough in 2019 due to a number of external factors, with our focus being on growing in 2020 and beyond,” informs Marshall. People Make Glasgow, and indeed Glasgow makes Scotland. Along with being a great place to visit, Glasgow Airport is a gateway to a home of 2.3 million people, plus the greater West Part of Scotland, with stunning scenery including the Isle of Skye all being within a few hours of the airport.