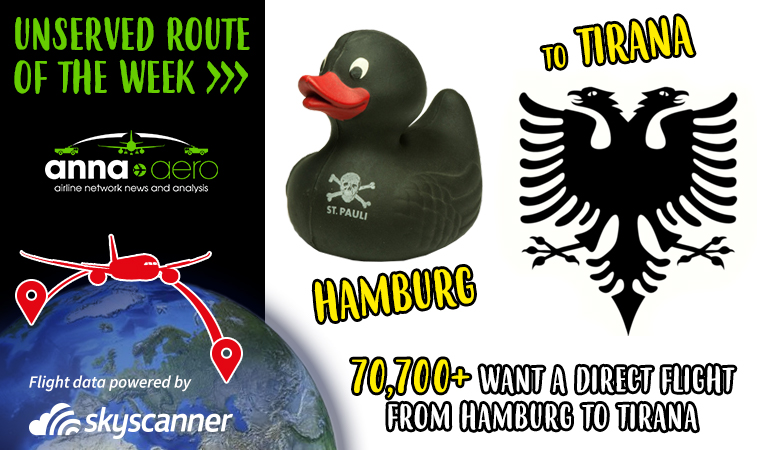 Hamburg to Tirana is a market which saw 70,700+ people look for a direct flight over the past 12 months on Skyscanner, but the route is currently not served. With 13,000 choosing to fly indirectly per annum, which carrier is likely to pick-up the connection between these two cities. Although they can fly, we’re sure the St. Pauli Rubber Duck of Hamburg and The Kastrioti’s coat of arms’ black double-headed eagle would love a direct fly to be able to hand out together.

Data from Skyscanner, one of the world’s leading flight search engines which has 70+ million unique visitors per month, shows that in the period between March 2018 and February 2019, over 70,700 people searched for a direct flight between Hamburg and Tirana, yet it is not served. “We see big potential for a direct service between Hamburg and Tirana,” comments Jörgen Kearsley, GM Aviation Marketing, Hamburg Airport “There are 2,300 Albanians living in Northern Germany, plus an additional 2,000 Germans with migration backgrounds linked with Albania living in Hamburg.”

Looking at the data in more detail, it shows there to a greater demand for the route from Hamburg, with the search split being 60% versus 40% in favour of the German city. Overall though, the average number of searches for this route is 5,899 per month. 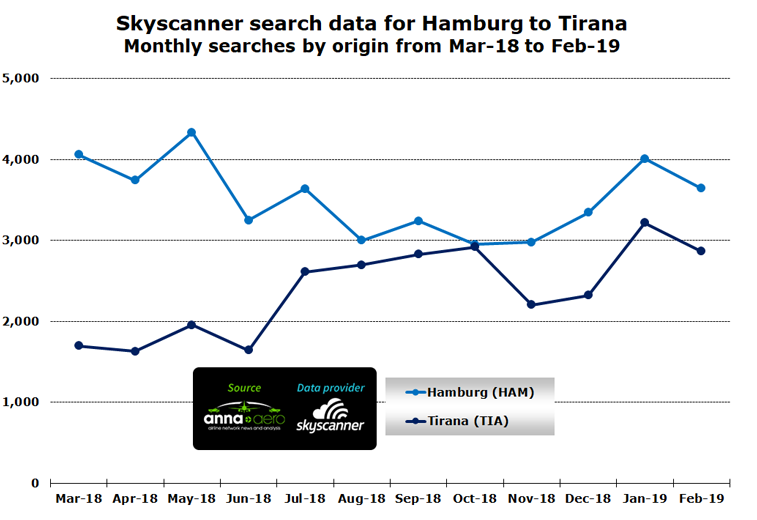 When referencing OAG Schedules Analyser data, there has not been a direct flight between Hamburg and Tirana before, however around 13,000 passengers per year fly indirectly between the two airports when looking at OAG Traffic Analyser data. Between November 2017 and October 2018, 47% of passengers flying between the two cities connected via Vienna on Austrian Airlines, while Frankfurt was the second most popular transit point, capturing 17% of traffic between Lufthansa and Adria Airways.

With the Hamburg-end of this potential city pair showing the greater share of annual searches by passengers, it is likely that a carrier based at this end of the route is more favoured for the service. Currently, Hamburg’s biggest airline is Eurowings, with it accounting for 29% of all seats operating from the airport in 2018. This summer it is offering a robust network from Hamburg, including capital connections to Amsterdam (Netherlands), Ankara (Turkey), Budapest (Hungary), London Heathrow (UK), Paris CDG (France), Pristina (Kosovo), Rome Fiumicino (Italy), Stockholm Arlanda (Sweden) and Vienna (Austria), making it a suitable fit for a capital link to Albania. Further supporting the argument for Eurowings, the airline’s average sector length per destination from Hamburg is 1,310 kilometres. With Tirana being 1,540 kilometres from Hamburg, it falls within the range of destinations which the airline presently flies from Hamburg, with the longest route currently being a 2,680-kilometre sector to Adana. Also, Eurowings is already present in the Tirana market, with it operating to the Albanian capital from Cologne Bonn (twice-weekly), Düsseldorf (twice-weekly) and Stuttgart (weekly) this summer. Düsseldorf is a new route launching in S19, with this showing that the airline is wanting to expand in the Albanian market.

Looking at the Tirana-end of the service, a carrier option for serving this route is Albawings. While it is mainly focused on the strong VFR market between Albania and Italy, it is launching services to Düsseldorf this summer, meaning that it is steadily looking into new markets, including Germany. Along with Albawings, another potential carrier that could explore the market is Wizz Air. While neither Hamburg or Tirana is a base for the airline, it is adding flights from the Albanian capital to Memmingen this summer, while it already links to Dortmund. As these two Germany destinations are not technically bases for the carrier, it shows that a W-pattern operation could work if the demand for serving the route is there. Wizz Air is present in Hamburg, offering services to Gdańsk, Kiev, Skopje and from July, Varna.