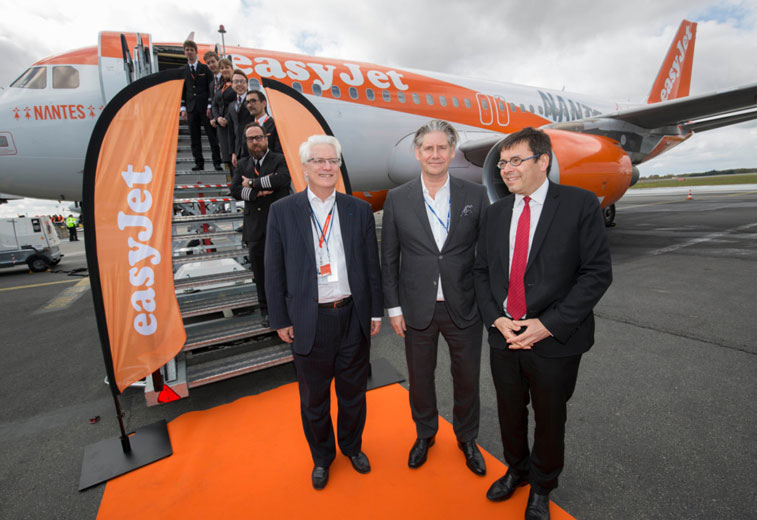 easyJet officially opened its Nantes base on 4 April, where it has stationed three A320s and will open 14 new routes, with services to Bilbao, Catania, Copenhagen, Granada, Ibiza, Marrakech, Rome Fiumicino, Tel Aviv and Tenerife South having been inaugurated during the first few weeks of the summer 2019 season. A further five routes will be added in June, namely Bari, Bastia, Dubrovnik, Heraklion and Olbia. Pictured at the base opening in front of the recently painted Nantes-themed A320, registered OE-IVK, are: Francois Bacchetta, Regional GM France & Benelux, easyJet; Johan Lundgren, CEO, easyJet; and Nicolas Notebaert, CEO of VINCI Concessions & President of VINCI Airports. 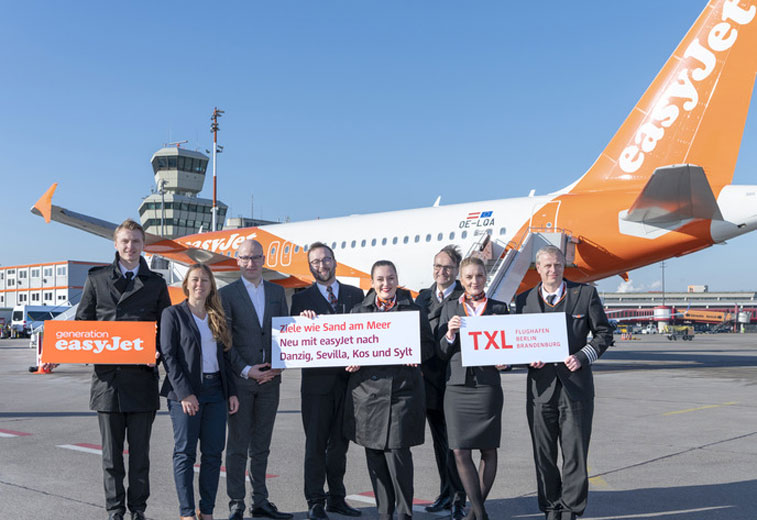 easyJet has introduced a number of new routes from its bases at Berlin’s Schönefeld and Tegel airports for the start of the S19 season, with it starting routes to Gdansk, a new airport for easyJet this summer, and Zadar on 2 and 4 April respectively. The airline also recently added new services to Seville from Schönefeld, while Tegel gained Manchester and Dubrovnik routes. Pictured at the S19 launch celebration at Tegel, which also included the announcement of new routes to Kod and Sylt from May, with the latter being a new airport for easyJet, are Jana Friedrich, Senior Manager Key Account & Business Development, Berlin Brandenburg Airport, and Stephan Erler, Country Manager Germany, easyJet. 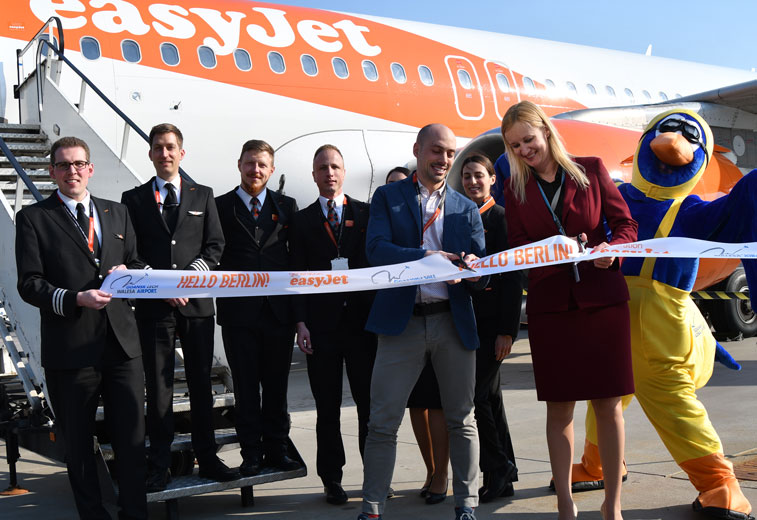 easyJet re-introduced Gdansk to its network on 4 April, launching a three times weekly service from Berlin Tegel. The carrier last served the Polish airport in 2008 with routes from Belfast International, Bristol and Gdansk. Cutting the ribbon at the Tegel route launch are Andrea Filosa, Development Manager, easyJet, and Iwona Tomczyńska, Head of Economic Analysis and Marketing Department, Gdansk Airport. No other airline currently operates this airport pair. 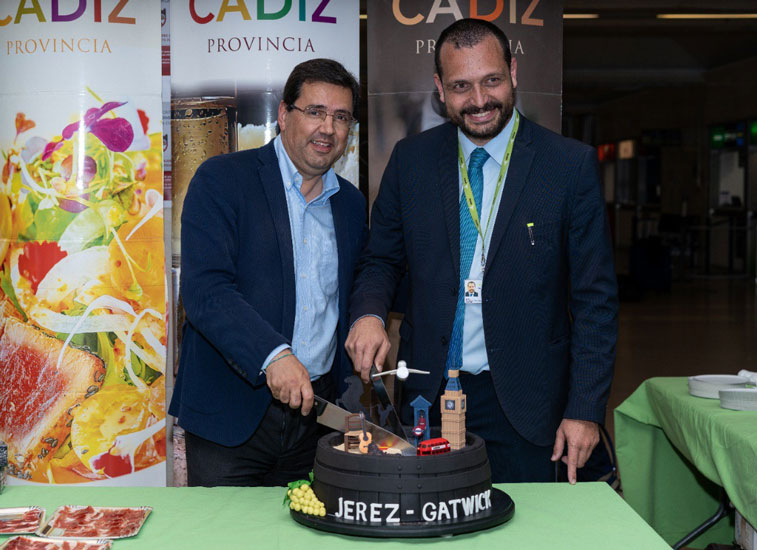 Cutting the cake in Jerez to toast the start of easyJet’s new link from London Gatwick are Javier Gándara, Country Director Spain, easyJet, and Iván Rodríguez, Director, Jerez Airport. easyJet started operations to Jerez on 2 June 2018, launching a seasonal route from Berlin Tegel. A third route to Jerez, from Manchester, will begin this August. 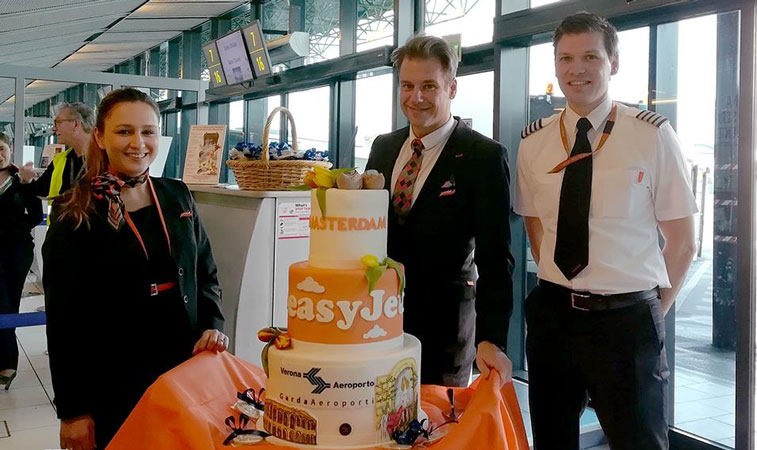 easyJet launched its newest route from Amsterdam on 2 April, with the LCC launching a three times weekly service to Verona, a 890-kilometre route which is presently flown by Transavia five times weekly. To celebrate easyJet’s latest route, the Italian airport baked this mighty cake, with the crew posing for a picture. This is only easyJet’s second route to Verona. It presently serves the airport from London Gatwick this summer with 10 weekly flights. 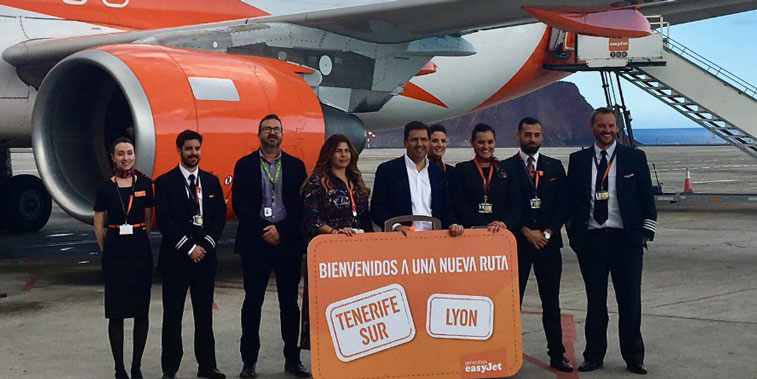 easyJet has based an eighth aircraft at Lyon for the start of the S19 season, allowing the carrier to open new services Seville and Tenerife South, with the latter airport holding a small celebration on the apron for the new route.