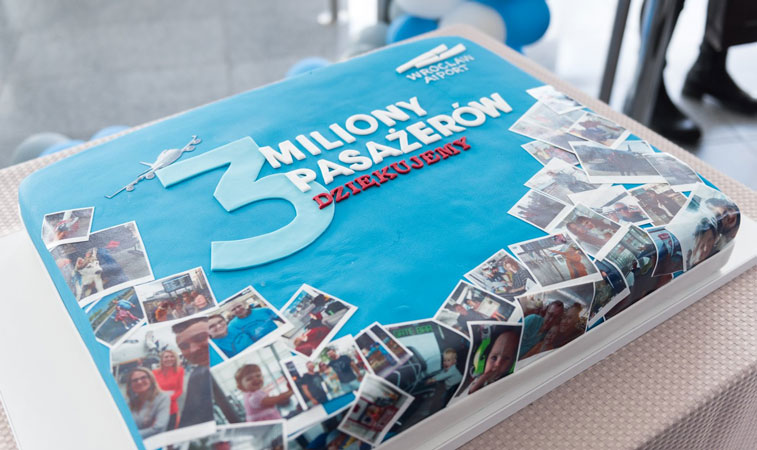 Wroclaw Airport hit the three million passenger barrier in 2018, handling a total of 3.35 million customers, up 17% versus 2017, and 145% higher than the 1.37 million passengers it handled in 2009. Along with seeing exceptional traffic growth, the number of passengers per movement has jumped from 53 in 2009 to 103 last year.

Home to a population of 632,000 inhabitants, Wroclaw is a city situated towards Western Poland. Known for its market square, lined with elegant town houses and panoramic countryside views, the city’s prominent aviation growth has most notably caught the attention of major European airlines in recent years. The airport has experienced impressive growth and this is a trend that is showing no signs of stopping. During Q1 2019, Wroclaw handled over 692,000 passengers, a rise of 14% versus the same three-month period of 2018. During this time, movements at the airport increased 2.3%, meaning the average passenger number per aircraft movement at the airport has gone from 89 in Q1 2018 to 99.4 in Q1 2019. Overall in 2018, the average passenger total per movement was 103, with this of course taking into account the busier summer period. However, this has grown from an average of 53 passengers per movement in 2009.

Last year, Wroclaw handled 3.35 million passengers, the first time it has broken the three million milestone, a result of passenger numbers growing by 17% versus the total handled in 2017. While the airport has encountered a steady rise in passenger traffic, most significantly within the past decade, it is important to note that between 2011 and 2012, traffic increased by 20%. According to StadiumDB.com, a strong factor contributing to this growth will have been due to Wroclaw being a host city for the UEFA European Football Championship, welcoming an average of 40,000 football fans during the event. As Wroclaw hosted an important Euro EXPO in 2012 as well, this too would have contributed to the successful growth that year, and also be a factor as to why traffic may have dropped slightly the following year. 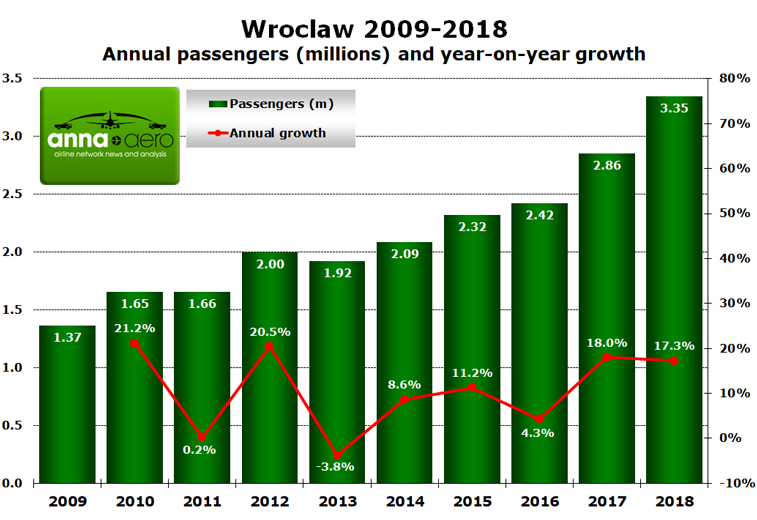 According to the airport’s website, the minimal growth between 2009 to 2011 was due to the construction of a new terminal which was inaugurated in February 2012. The terminal construction project is likely to have disrupted many seasonal charter airlines including Enter Air and SmartWings Poland (formally Travel Service Poland) during this time. Despite this, charter traffic has blossomed from the airport over the past year. Over 490,000 charter passengers travelled from the airport in 2018, a rise of 70% versus 2017. Charter passengers accounted for 15% of all traffic through the airport last year, rising from a market share of 10% in 2017 according to statistics from the airport. Regarding country markets, one of the biggest from Wroclaw is the UK, accounting for 25% of all passengers in 2018. The biggest routes are to London Stansted (210,800 passengers in 2018 according to UK CAA data), London Luton (150,500) and East Midlands (85,600).

Wroclaw, which is also a popular tourist destination, is home to a growing number of foreigners, many of which come from Eastern Europe including Russia, Belarus and Ukraine. Wroclaw is home to a large concentration of Ukrainians, and according to Wroclaw’s Statistical Office, plus other confirmed sources, it suggests that 10% of the city’s inhabitants are of Ukrainian background. With this, it is not surprising to see airlines including Ryanair and Wizz Air have taken advantage of this growth, as Ryanair is planning a new route to Odessa from October, adding to its existing Kiev Boryspil link, while Wizz Air serves Kharkiv and Kiev Zhulyany. The ULCCs have taken advantage of the market in recent years, with the two combined accounting for 64% of all seats from the airport last year. 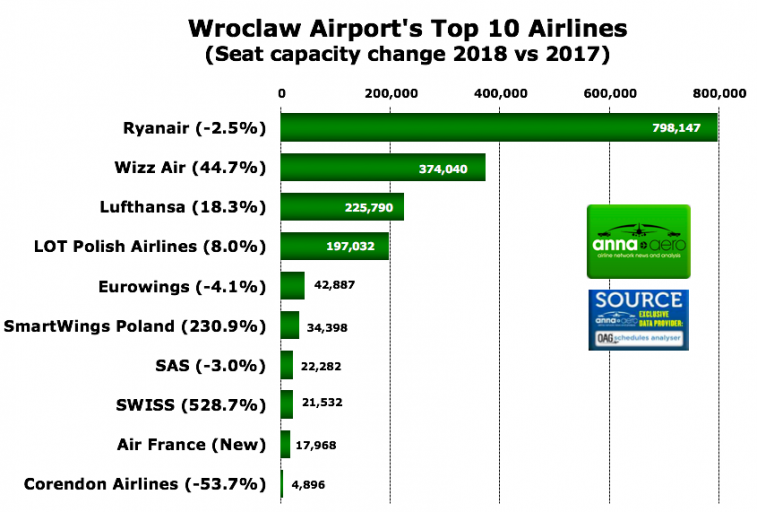 According to OAG Schedules Analyser data, despite being a Polish carrier and increasing it’s one-way  seat capacity by 16,400 in 2018, LOT Polish Airlines reported the smallest rise in seats of all growing airlines last year, reporting a rise of 8.0%. Wizz Air reported a strong increase in seats of 45%, a result of it basing an additional aircraft at Wroclaw. Despite topping the leaderboard, Ryanair cut seat numbers by 2.5% in 2018, representing a net decrease in one-way seat numbers of 20,790 over the previous year for the carrier from the airport.

Since 30 October 2017, SWISS has operated a three times weekly service to Wroclaw from Zurich, resulting in it posting a 530% increase in seats over the last 12 months, as 2018 was the carrier’s first full year of operations at the airport. Elsewhere, Corendon Airlines reduced seat capacity by 54% in 2018, cutting its offering on its connection to Antalya in S18. Looking ahead to new routes from Wroclaw this year, one which stands out begins in a few weeks’ time. From 6 May, KLM will offer flights to Wroclaw from  Amsterdam. The airline will utilise its E175s to cover the 845-kilometre sector, a route it will operate daily and opens up new connection options via the SkyTeam’s hub. 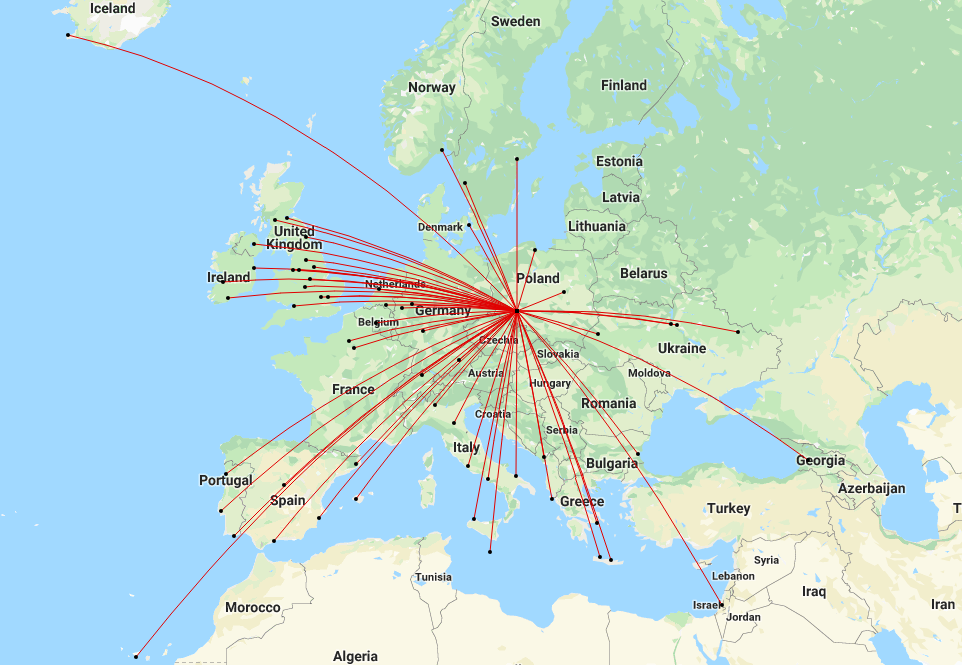 Wroclaw’s route map shows the importance of the UK market to the Polish city with it directly connected to 13 UK airports this year, while the market accounts for 25% of the airport’s total traffic. One of the biggest route launches in 2019 will take place in a few weeks’ time, as KLM starts a daily service to the city from Amsterdam from 6 May.