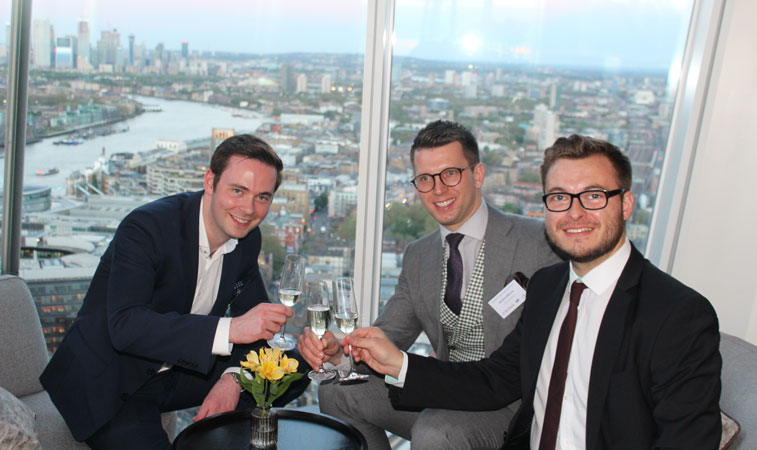 Cheers to route success! On 25 April, a special cocktail event took place at the Shangri-La Hotel at The Shard in London to celebrate the soon-to-launch operation by LOT Polish Airlines between Vilnius and London City. Pictured cheering to the new route opening, overlooking the stunning views of River Thames, are Pete Downes, Aviation Director, London City Airport; Aurimas Stikliūnas, Head of Aviation Services, Lithuanian Airports; and Jonathan Ford, Aviation Development Editor, anna.aero. The carrier will serve the 1,711-kilometre route from 1 May on a 12 times weekly basis.

LOT Polish Airlines, Lithuanian Airports, and London City Airport held a special cocktail party at the Shangri-La Hotel, situated in The Shard, on Thursday 25 April to celebrate the soon-to-launch service by the carrier between Vilnius and London’s most central airport. From 1 May, the airline will operate the 1,711-kilometre route between the two European capital airports 12 times weekly using a 98-seat E190.

The service will operate twice-daily on weekdays, with a single daily rotation on Saturdays and Sundays. Services from Monday to Friday will depart Vilnius at 06:30 and 16:55, with arrivals into London at 07:30 and 17:55 respectively. Return services leave London City at 09:35 and 18:40, touching down back in Lithuania at 14:35 and 23:40, with the flight timings making it a perfect fit for passengers in Lithuania wanting to make the most of a day trip to London, while passengers from the UK can make it to Lithuania for afternoon meetings. On Saturdays, the daily departure will be the same as the mid-week morning rotation, while Sunday services will mirror that of the mid-week afternoon flight time, allowing perfect timings for weekend break opportunities.

“For passengers between Lithuania and the UK, this new connection is an attractive alternative to the existing offering of flights to London’s Luton and Stansted airports which are much further from central London. In addition, many people with Lithuanian roots live in East London, which makes the new flights even more attractive to them,” commented Adrian Kubicki, Spokesman, LOT Polish Airlines, when it was announced that the carrier had been awarded the contract to operate the flights. This becomes the airline’s third route to London City, having already established operations this year from Budapest and Warsaw Chopin.

When referencing UK CAA data, it shows that over 1.18 million people flew between the UK and Lithuania in 2018. A further breakdown of the data shows that 475,000 of these passengers used services from London’s Luton and Stansted airports with Wizz Air and Ryanair to Vilnius. The results show that traffic on these routes combined have grown 34% from 355,300 passengers in 2017. Flights between London and Vilnius presently account for 40% of all passenger traffic per year between the UK and Lithuania, up from a share of 34% in 2017, signifying the growth in the city pair between the two country markets and its dominance. 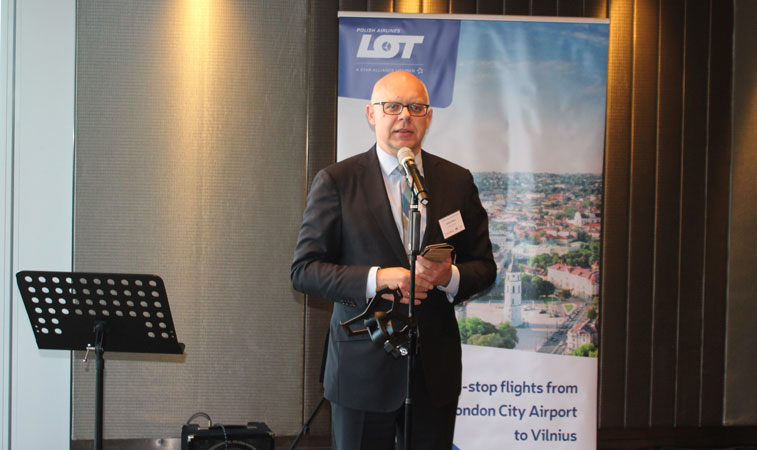 A number of speeches were conducted at the cocktail event celebrating the new route by LOT Polish Airlines between Vilnius and London City. First to speak was Renatas Norkus, Ambassador of Lithuania to the UK. He spoke of the growing relations between the UK and Lithuania, plus the strong partnership that Lithuania has with Poland, making it a perfect fit the Polish flag carrier to be conducting these flights from 1 May. “While we are happy to have services to London Luton and London Stansted, having a connection to the heart of London is vital for Lithuanian business.” 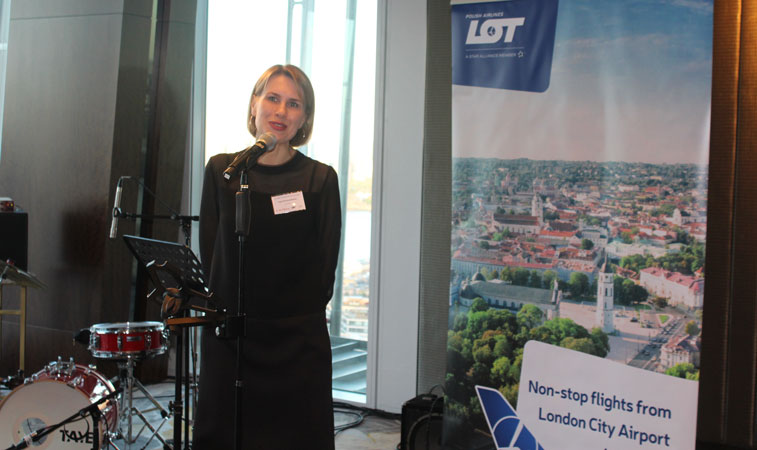 Next to the podium was Inga Romanovskiene, Director, Go Vilnius, who spoke of the many reasons why the route is vital for the city’s growth, and why people should visit the city. Go Vilnius – the official development agency of the City of Vilnius – provides visitors, investors, relocating talent, entrepreneurs and businesses with everything they need to know about our city. From real estate to residency to advice on what to see and do. “We are one of the friendliest and safest cities in Europe, and we’re sure to show you an amazing time,” added Romanovskiene at the end of her speech. 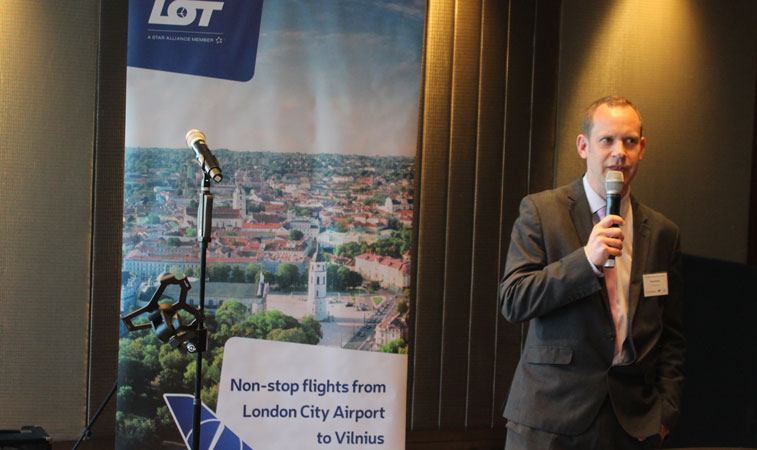 Among the representatives for the airline at the gala evening was David Bentley, Regional Director – UK, Ireland & Scandinavia, LOT Polish Airlines, who commented on the carrier’s new route, and the success of the airline’s recently launched operations to London City from Warsaw Chopin and Budapest. 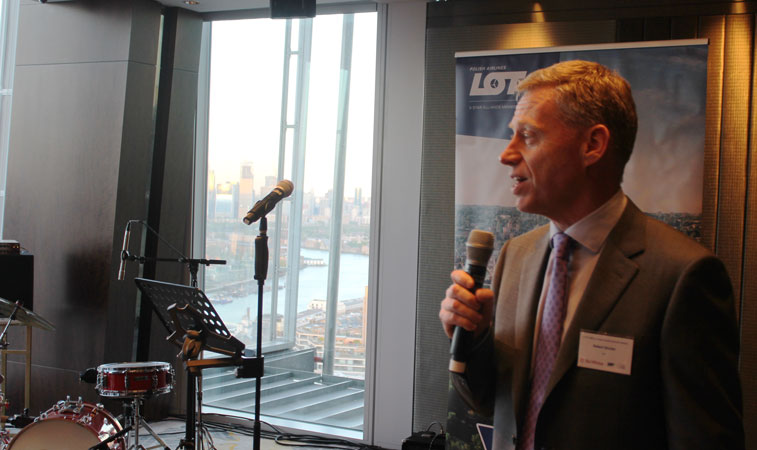 Commenting on behalf of the UK airport at the cocktail reception was Robert Sinclair, CEO, London City Airport. “East London is home to the largest population of people with Lithuanian heritage in the UK, therefore this route is perfect for flying direct to the heart of these people.” Sinclair also spoke of how traffic between the UK and Lithuania has risen by 43% over the last few years, which is great for London City to now direct access to this market. When referencing UK CAA data, it shows that over 1.18 million people flew between the UK and Lithuania in 2018. A further breakdown of the data shows that 475,000 of these passengers used services from London’s Luton and Stansted to Vilnius, with traffic on these routes combined having grown 34% from 355,300 passengers in 2017. 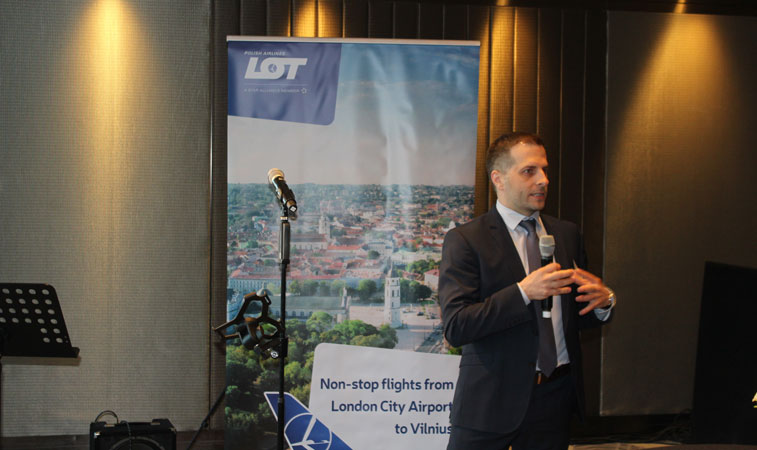 The final speaker of the evening was Dainius Čiuplys, Director, Vilnius Airport, who spoke of the hard work that Lithuanian Airports had done over the past nine months in order to help generate this new direct flight. anna.aero would like to thank Lithuanian Airports, along with LOT Polish Airlines and London City for inviting to enjoy the evening.