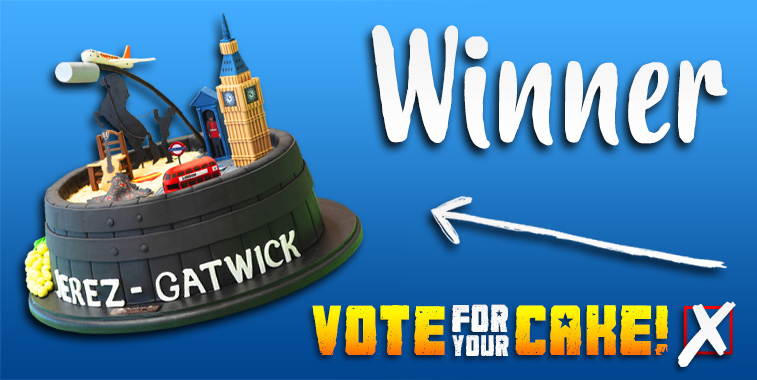 Taking 48% of the vote in Part II of the anna.aero S19 Public Vote, Jerez Airport is basking in not just Spanish heat, but also Cake of the Week glory. It has taken the title for the highly impressive bake which it created for easyJet’s inaugural service from London Gatwick, a route which will operate three times weekly this summer.

Taking 48% of the vote in Part II of the anna.aero S19 Public Vote, Jerez Airport is basking in not just Spanish heat, but also Cake of the Week glory. It has taken the title for the highly impressive bake which it created for easyJet’s inaugural service from London Gatwick. Accumulating over 2,500 votes alone, it is one of our most popular vote winners, with over 5,370 votes having been cast. Second to Jerez in the vote was Tulsa, which took 44% of the vote for the cake it made for American Airlines’ first flight from Los Angeles. With just 200 votes between them, it was a well battled race to the title. Settling in third was Verona, which took 3% of the vote for cake it commissioned for easyJet’s first flight from Amsterdam. So it appears the power of orange helped in this week’s voting. with just 3% of the vote, it shows the level playing field among the 26 cakes that were up for the title in Part II of the vote.

Along with cake, a second winner in last week’s voting was Faro Airport, highlighting the power of the Iberian Peninsula on the ballet, with the Portuguese airport accumulating 57% of the vote for its splendid salute to SAS’ first flight from Aarhus. Faro also took second place, again for SAS, for another route from the North, this time from Gothenburg. Third spot was taken by Gold Coast in Australia for its watery welcome of Airnorth’s first service from Darwin via Townsville. So why European airports took the top spot in both competitions, the battle shows that it was a well thought global battle across the two contests. 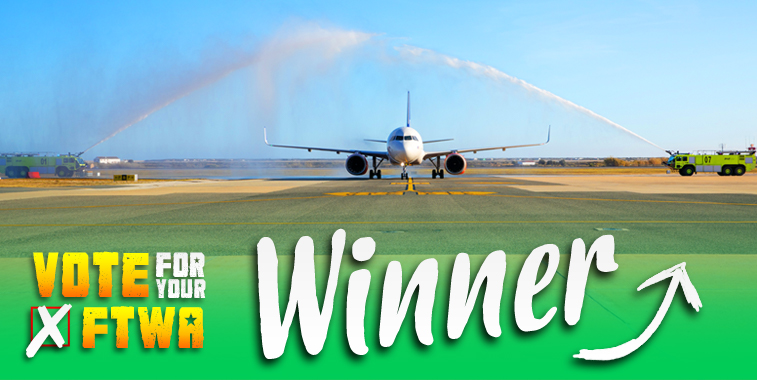 Faro Airport accumulated 57% of the vote for its splendid salute to SAS’ first flight from Aarhus to claim victory in Part II of the S19 Arch of Triumph Public Vote. With it also gaining second spot for another SAS launch.

With the two weeks of public voting having now come to an end, it is time for anna.aero’s esteemed judges to return to normal duties for the rest of the summer season, before the voting returns at the start of the W19/10 season. With that, we have received three water salutes for this week’s route launches, one from Europe, Asia and Australia. Keep Monitoring!! 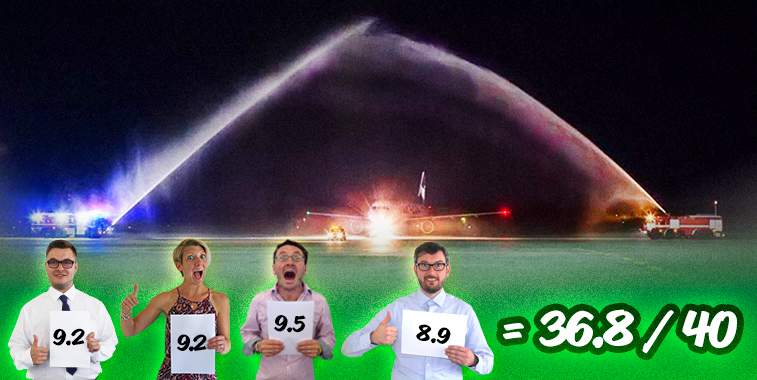 Judges’ Comments: By the scrap of their neck (or scrap of a jet), Kiev Boryspil has taken victory this week for the splendid arch it created to greet Aigle Azur’s inaugural service from Paris Orly. The only thing stopping the airport getting the top spot is the fact that there is no light display from the right-hand tender, while there arch does not perfectly meet. However, as the two trucks are using either a front (left tender) or roof-mounted (right tender) jet nozzle, the symmetry earns extra kudos points from the judges. 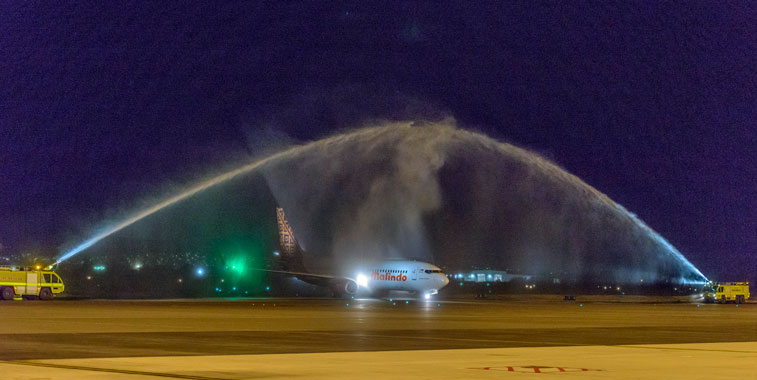 A wet welcome in Adelaide for Malindo Air.

Judges’ Comments: This arch has everything going for it, matching jet symmetry, the tenders are of the same manufacturing model and era, a well-lit scene despite it being an evening arrival, plus the aircraft lighting helps to further illuminate the image. It was just 0.3 points between this and Kiev, however if the photographer had just been a bit more angled towards a head-on shot of the aircraft, this could have gone straight to the top of the Arch of Triumph overall leaderboard… 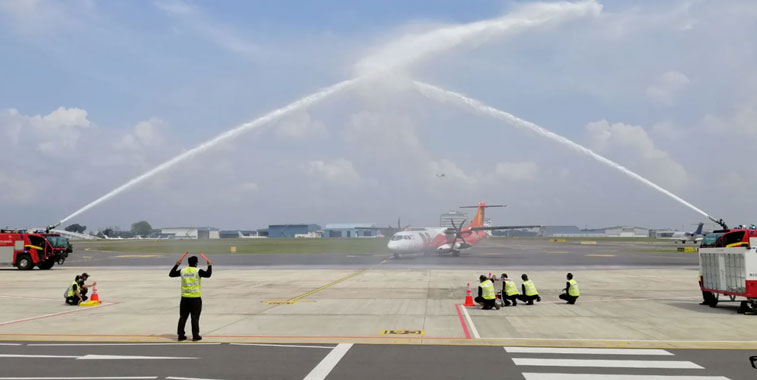 Ducking for cover in Singapore!!

Judges’ Comments: Why the photographer may have shouted “GET OUT OF THE WAY” so that they could have got a clean shot, we at anna.aero think they mistook this order for a ducking one, resulting in them still being in the image. Either that, or they were trying to get as low from the water as possible. Do they not know about the physics of gravity at Seletar Airport?!?!