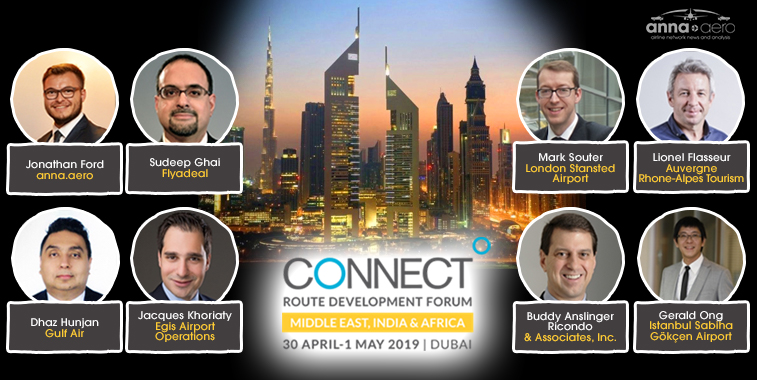 Next week marks the inaugural CONNECT MEIA Conference, taking place in Dubai between 31 April and 1 May at the Dubai World Trade Centre, co-located with the Arabian Travel Market. anna.aero will be in attendance at the event, with Jonathan Ford, Aviation Development Editor, anna.aero, presenting and moderating a panel discussion on what opportunities and challenges there are at the moment for the Middle East region, with him being joined by Jacques Khoriaty, Middle East & South Asia Aviation Director, Egis Airport Operations; Sudeep Ghai, Chief Customer & Commercial Officer, flyadeal; and Dhaz Hunjan, Director of Planning, Gulf Air. He will also conduct a panel debate on how airports and their regions work together to attract new airline services and open up new markets, being joined by Mark Souter, Head of Aviation Development, London Stansted Airport; Lionel Flasseur, General Director, Auvergne Rhone-Alpes Tourism; Buddy Anslinger, Director, Ricondo & Associates, Inc; and Gerald Ong, Aviation Marketing Director, Istanbul Sabiha Gökçen Airport.

The Middle East is a region which is certainly not far from the global headlines, and that is within the aviation sector alone. Home to a population of over 400 million people, along with a high percentage of expats, it is a region of high prosperity. With the inaugural CONNECT MEIA taking place next week in Dubai, anna.aero has decided to look at the region in more depth to see how the aviation market has developed over the past 10 years. It should be noted that anna.aero has conducted this analysis of the Middle East with country classification by OAG, therefore Egypt (classed as Africa) and Turkey (Europe) have been excluded from this analysis.

Seat capacity to the Middle East has advanced quite significantly in recent years, with the market’s scheduled airline seat count having doubled between 2009 and 2018. Last year, there was a reported 264.31 million scheduled departing seats from the region, up 101% versus 2009. Looking at the past decade in more detail, it shows that the biggest growth surge took place between 2013 and 2016, with over 67 million departing seats being added to the region over the course of the three-year period. 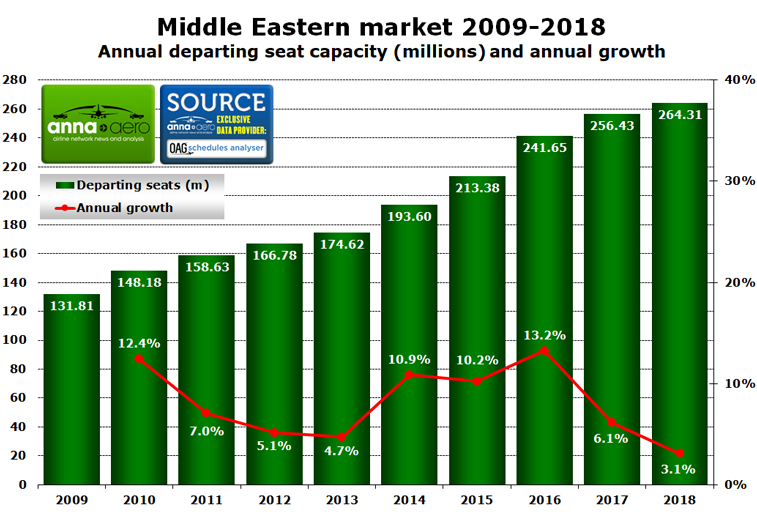 While the market has been prosperous, the latter few years show that growth is stagnating. In 2018, scheduled seats grew by just 3.1%, a quarter the size of the growth encountered two years before (13% in 2016). Of course, this can be related to the growth of last year coming off a bigger base number of seats, however, when looking at net seat growth, only 7.88 million additional scheduled departing seats were flown from the region in 2018, while there was 14.78 million extra ones in 2017, and 28.27 the year before that. This highlights that airlines are not adding as much capacity to the region as in the years before.

All eyes on Israel 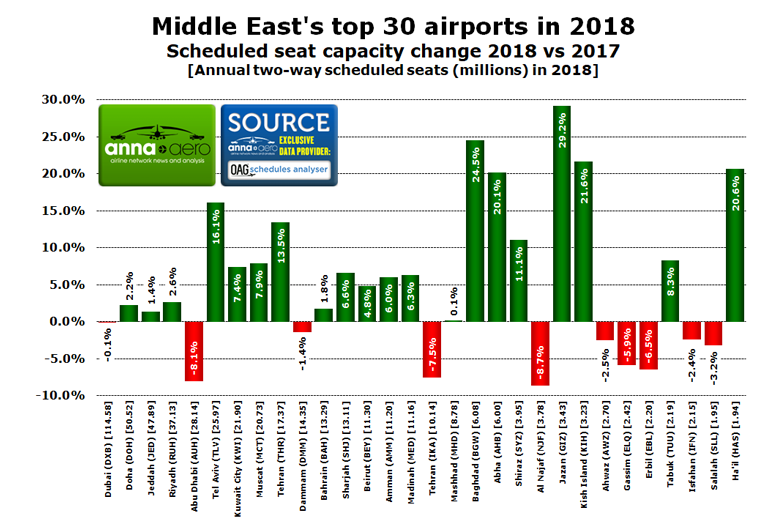 Dubai by far remains the region’s leading airport, and while it did report a 0.1% reduction in scheduled seats last year, the airport’s passenger numbers climbed 1.0% to hit 89.15 million. Dubai is a market which accounted for 22% of all departing seats from the Middle East in 2018, a market share it has consistently kept since 2009. Dubai has also mirrored the average growth rate of the Middle East during the past decade, with the airport’s passenger numbers rising by 89% between 2010 and 2018, going from 47.26 million to the levels encountered last year.

The region’s largest airline is Emirates, with it offering 41.55 million departing seats from the region in 2018, a rise of 0.7% versus the year before. Following Emirates is Saudi Arabian Airlines, a carrier which grew its departing seat capacity by 3.0% in 2018, while third placed Qatar Airways reported a 2.8% decline. However, while the latter airline is reporting a decline in seat capacity from the region, overall it flew 4.7% more seats last year than it did in 2017, with the decline in the Middle East a result of the blockade on the nation by other countries in the region, which is still ongoing. 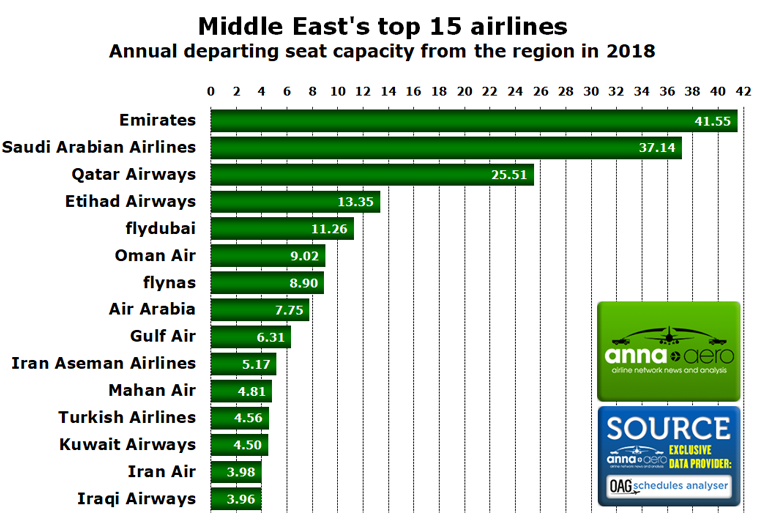 Looking at the region’s leading airlines, it appears that the star performers last year are from Iran, with Iran Aseman Airlines (20% rise in scheduled departing seat capacity from the region in 2018) and Iran Air (12%) both showing double-digit growth last year. Among the leading operators though, another star development is being seen in Oman, with Oman Air showing a 9.2% rise in departing capacity last year.

One area of the market which is picking up in the Middle East is the emergency of the LCC model. In 2009, low-cost seats accounted for just 4.2% of all those departing the region. However, by 2018, this figure had risen to 16%. While low-cost seat numbers have grown by 659% in the last 10 years, going from 5.52 million departing seats to 41.91 million last year, the region is still below the global average for the LCC sector. In 2009, low-cost airline seat capacity accounted for 19% of all global seats flown, while in 2018 the market share was reported at 30%. With low-cost seat availability having grown 147% over the past 10 years, it shows that the Middle East is fast adopting the model, with LCC capacity growing four and a half times faster in the Middle East versus the rest of the world over the past 10 years.

Next week marks the inaugural CONNECT MEIA Conference, taking place in Dubai between 31 April and 1 May at the Dubai World Trade Centre, co-located with the Arabian Travel Market. Over 40 airlines are confirmed to attend the event, including official carrier Emirates, plus Air Arabia, China Southern Airlines, SpiceJet and more.

The event, along with airline one-to-one meetings, will also have a two-day conference which will be compared by anna.aero. The conference programme will look at topics focused on the state of the industry, understanding how passenger profiling is fundamental to air service development, what the opportunities and challenges for the Middle East region are when coming to developing new air service, plus how do airports and their regions work together to attract new airline services and open up new markets?

Along with conference and meeting sessions, a networking evening will also take place on Tuesday 30 April, with the setting for the night’s entertainment being the Viewing Deck, Palace Downtown Dubai. For more information about the event, including official hotels and location of the show within Dubai, and to also register your attendance to meet with some of the 40 airlines confirmed so far for the conference, do so at this link. 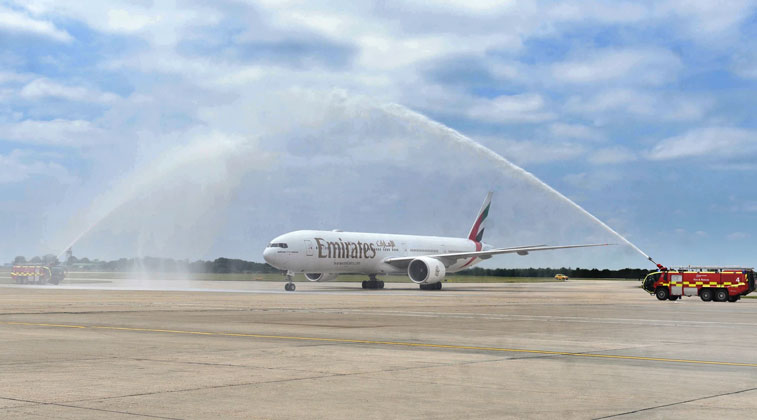 London Stansted became one of the newest airports to join the network of the Middle East’s largest airline last year when Emirates launched daily services from Dubai, a route which will be going twice-daily later this summer. Next week in Dubai, the London Airport’s Head of Aviation Development, Mark Souter, will be taking part in a panel debate looking at how airports and their regions work together to attract new airline services, moderated by anna.aero.