CONNECT Middle East, India & Africa – all the highlights from Dubai 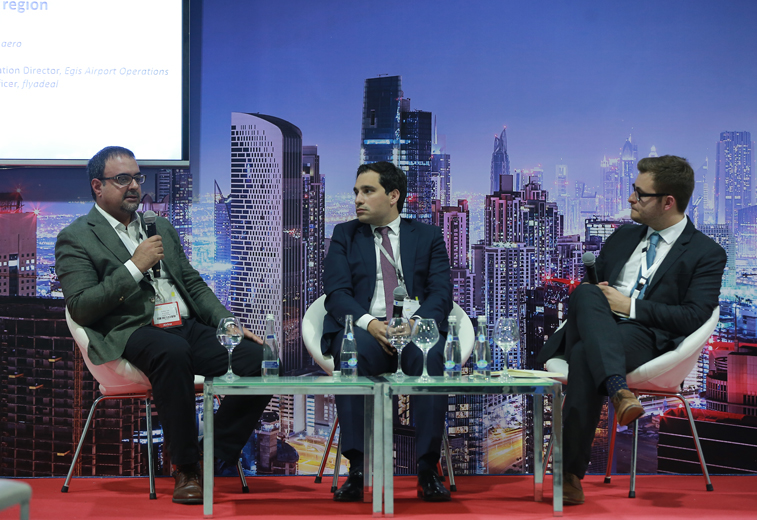 The inaugural CONNECT Middle East, India and Africa conference took place in Dubai between 30 April and 1 May, co-located with the Arabian Travel Market. Among the many agendas being discussed over the two-day conference was about the Middle East, and what challenges and opportunities lie ahead for the region regarding aviation. Taking part in the panel discussion were Sudeep Ghai, Chief Customer & Commercial Officer, flyadeal; Jacques Khoriaty, Middle East & South Asia Aviation Director, Egis Airport Operations; and Jonathan Ford, Aviation Development Editor, anna.aero.

The inaugural CONNECT Middle East, India & Africa conference took place in Dubai last week, co-located with the Arabian Travel Market. The event, along with airline one-to-one meetings, hosted a two-day conference which was compared by anna.aero. The conference programme looked at topics focused on the state of the industry, understanding how passenger profiling is fundamental to air service development, what the opportunities and challenges for the Middle East region are when coming to developing new air service, plus how do airports and their regions work together to attract new airline services and open up new markets?  “CONNECT Middle East, India & Africa is a new addition to the route development calendar and co-located with the Arabian Travel Market is a natural choice given the unprecedented growth in aviation across the region. We are delighted to welcome delegates to what promises to be a series of lively debates and discussions over the coming days, while many meetings will take place with the 40 airlines in attendance,” commented Karin Butot, CEO, The Airport Agency and Founder of CONNECT.

Over 40 airlines were registered for the event, with some 250+ delegates taking part in the first outing of the conference. Among the airlines represented at the show included China Southern Airlines, Emirates, flyadeal, flydubai, Gulf Air and SalamAir.

Day one – welcome speeches, talks on the industry and Middle East development 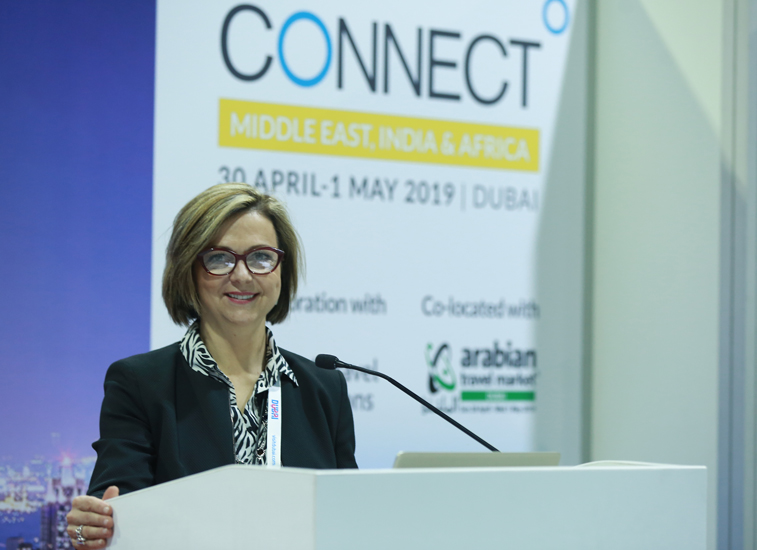 The inaugural CONNECT Middle East, India & Africa conference was kick-started with a speech from Karin Butot, CEO of The Airport Agency and Founder of CONNECT.  “CONNECT Middle East, India & Africa is a new addition to the route development calendar and co-located with the Arabian Travel Market is a natural choice given the unprecedented growth in aviation across the region. We are delighted to welcome delegates to what promises to be a series of lively debates and discussions over the coming days, while many meetings will take place with the 40 airlines in attendance.” 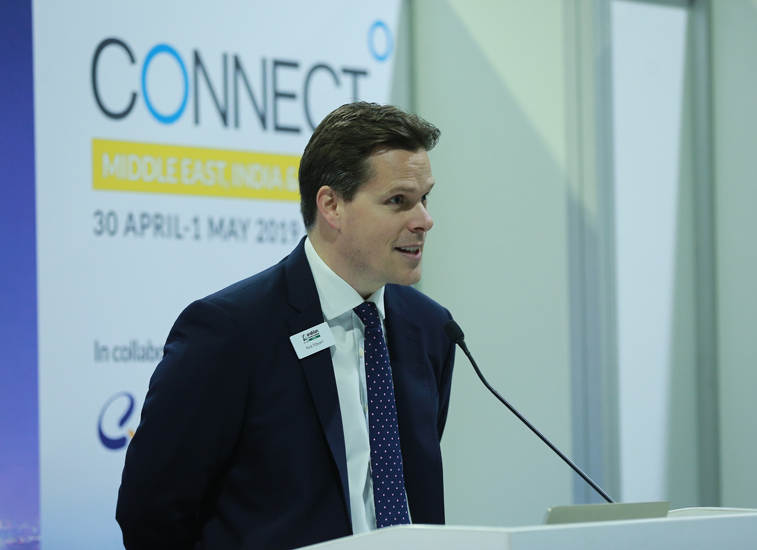 Nick Pilbeam, Divisional Director, Reed Travel Exhibitions which has collaborated with CONNECT to bring you the new Middle East, India and Africa show, took to the podium to also give his welcoming address. “Two-thirds of the world’s population are within an eight-hour flight of Gulf Cooperation Council countries, and the region’s airlines are continuously adding new routes, connecting to fresh destinations. Therefore we are thrilled to partner with CONNECT to bring this addition to our Arabian Travel Market show.” Once Pilbeam had spoken, the official conference agenda commenced. 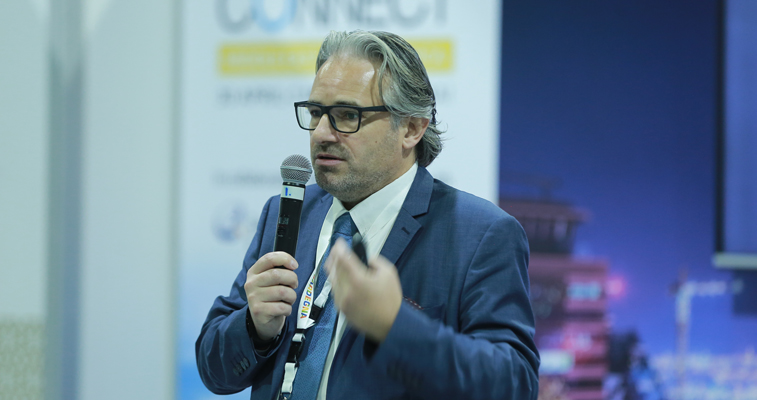 The first presentation of the two-day conference was given by Christophe Ritter, Managing Partner, Predictive Mobility, who spoke on the ‘Simpson Paradox in Donut Crunching’. “The issue with data, is that different characteristics can change outcomes, depending on how you look at the data. Edward Simpson found that in statistics, trends or results in several different groups of data can disappear of disperse. Third party results can disturb results too,” he added. Ritter’s talk focused on how to get better data accuracy while estimating route potential of analysing competitor route performance. 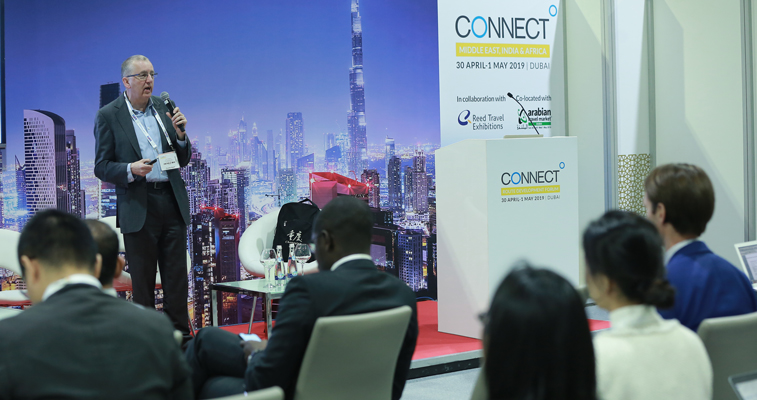 John Strickland, Director, JLS Consulting, was also a participant at the inaugural event. He spoke about the state of the industry. “We are going to see more of these aircraft coming into the long-haul arena as airlines seek to reduce risk and cost per seat,” he commented about airlines starting to have a wider range of fuel-efficient, short- medium- and long-haul aircraft at their disposal, including the recently introduced A321LRs and ultra-long-haul A350s. “It means that airlines can be more flexible with their aircraft, for instance an A321 flying to/from North America before returning to do a sector to somewhere in Europe.” Strickland also commented on the key changes and developments in Africa and India too. 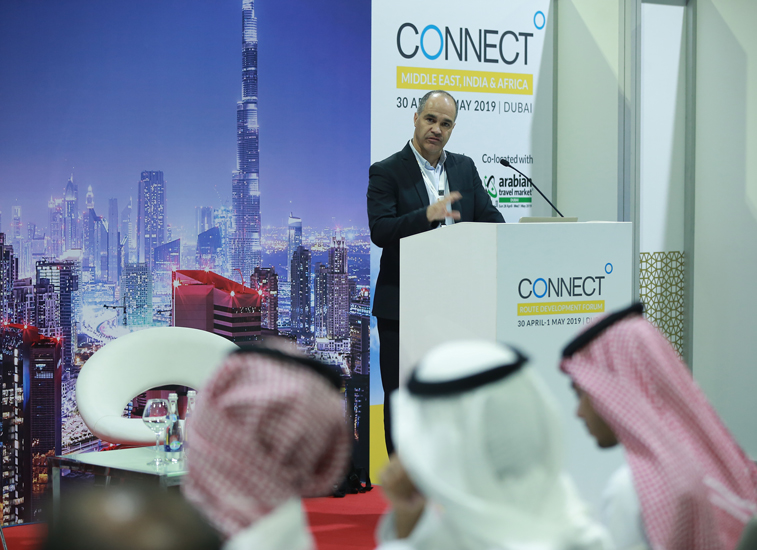 Another session at the CONNECT Middle East, India & Africa conference came from Airbus which gave a briefing on their future outlook and where they see the development of aircraft operations going in the years to come. The presentation was given by Sebastien Lavina, Manager Airport Data, Airbus. Lavina also showed a video on ground handling in the ‘airport of the future’ – characterised by automation featuring wireless tablets and electrical cargo robots. 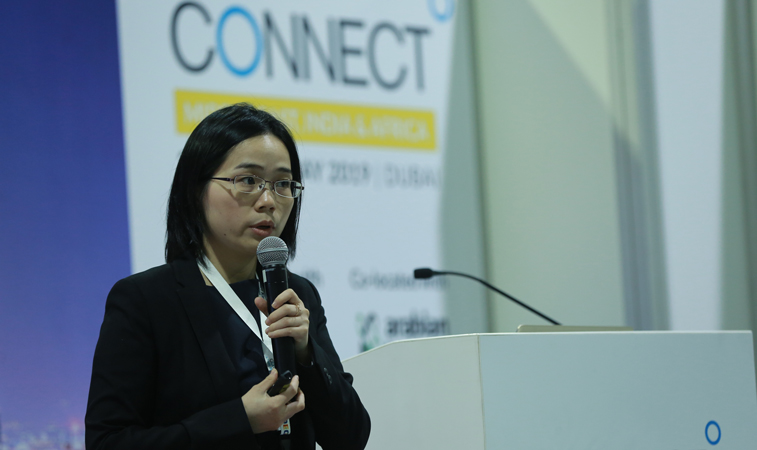 The first airline briefing of the conference was given by China Southern Airlines, with the carrier’s representative to give the presentation being Grace Tang, Senior Manager, International & Corporate Relations for the carrier. “Currently er have 826 aircraft in the fleet, including subsidiaries, and we plan to grow this to 1,000 by 2020,” commented Tang. “In S19 we will operate 1,300 routes, and we are fifth in the world for total ASKs operated.” Tang also spoke on the airline’s dual-hub strategy, including the Canton route strategy at Guangzhou where the airline plans to have 200 aircraft, plus the 105 aircraft it plans to have stationed at the new Beijing Daxing Airport in 2020, growing to 250 aircraft by 2025. 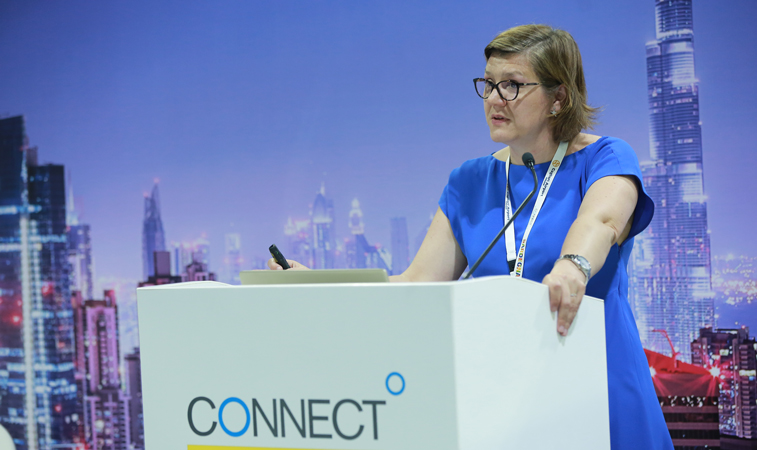 The fifth speaker of day one was Annabelle Lepièce, Partner, CMS DeBacker. Her presentation was title: ‘The European Union External Aviation Policy’. Lepièce spoke of the EU legal framework of bilateral air service agreements, plus the 2015 EU Aviation Strategy. She then commented on the relations between the EU and the Gulf Region, India and ASEAN. “The European Commission requests the authorisations from the council to negotiate comprehensive EU-level air transport agreements with China, ASEAN, Turkey, Saudi Arabia, Bahrain, UAE, Kuwait, Qatar, Oman, Mexico and Armenia,” she noted on the European Commision’s proposal for its aviation strategy for Europe in December 2015. The most recent development has been the conclusion of negotiations with Qatar for a new aviation agreement. “One of the conclusions is a gradual market opening over a period of five years to those EU states which have not yet fully liberalised direct connections for passengers: Belgium, Germany, France, Italy and the Netherlands.” 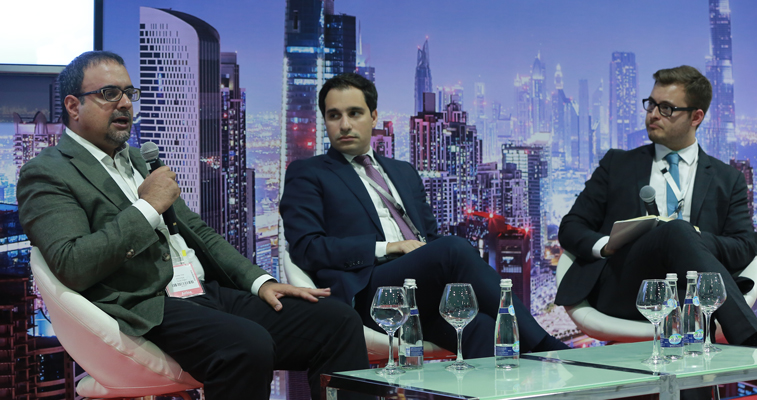 The first panel discussion of the conference focused on the Middle East, and what challenges and opportunities lie ahead for the region regarding aviation. Taking part in the panel discussion were Sudeep Ghai, Chief Customer & Commercial Officer, flyadeal; Jacques Khoriaty, Middle East & South Asia Aviation Director, Egis Airport Operations; and Jonathan Ford, Aviation Development Editor, anna.aero. Before the talk, Ford presented on the developments in the Middle East. “One area of the market which is picking up in the Middle East is the emergency of the LCC model. In 2009, low-cost seats accounted for just 4.2% of all those departing the region. However, by 2018, this figure had risen to 16%. While low-cost seat numbers have grown by 659% in the last 10 years, going from 5.52 million departing seats to 41.91 million last year, the region is still below the global average for the LCC sector. In 2009, low-cost airline seat capacity accounted for 19% of all global seats flown, while in 2018 the market share was reported at 30%. With low-cost seat availability having grown 147% over the past 10 years, it shows that the Middle East is fast adopting the model, with LCC capacity growing four and a half times faster in the Middle East versus the rest of the world over the past 10 years,” commented Ford. Both Ghai and Khoriaty commented on how the region was adopting the low-cost model, and how tourism is helping drive growth in the region. Ghai also commented on the potential the region has in having a pan-country based LCC, with many at the moment being restricted to home country growth due to various bilaterals and the region not being so liberal compared to regions including Europe.

On the 30 April, CONNECT Middle East, India & Africa hosted its Networking Evening, taking place at the Viewing Deck, Palace Downtown Dubai. Along with networking, delegates could look up at the magnificent Burj Khalifa, gaze at the dancing Dubai Fountains, or marvel around at the architectural wonder that is Downtown Dubai. 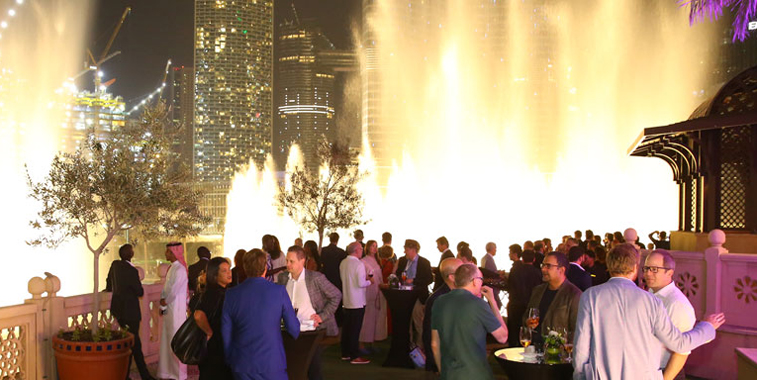 All airline, airport and supplier delegates of CONNECT Middle East, India & Africa were invited to enjoy an evening of drinks and canapés at Viewing Deck, Palace Downtown Dubai. Along with networking and catching up with each other after a busy first day, delegates also enjoyed the spectacular view of the Dubai Fountains. 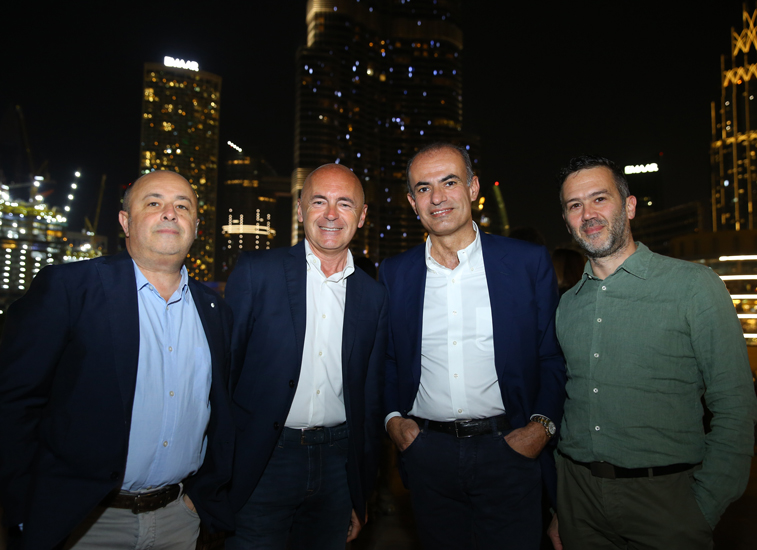 Day two – working together and the potential of Africa 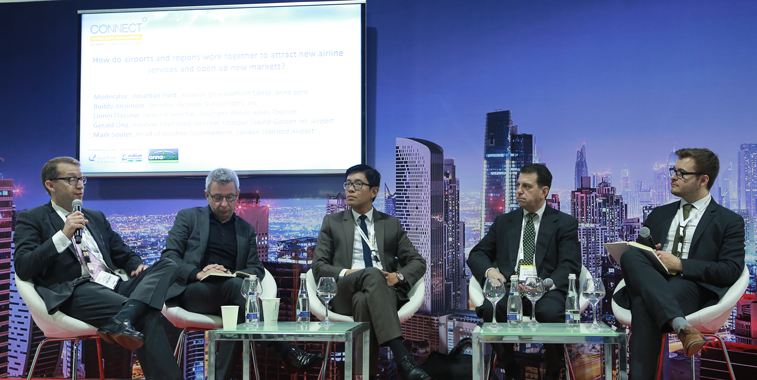 Day two of the conference was kicked-off with a panel discussion on how airport and their regions work together to attract new airline services and open up new markets, plus what can be learned from engaging case studies. Taking part in the panel discussion were Mark Souter, Head of Aviation Development, London Stansted Airport; Lionel Flasseur, General Director, Auvergne Rhône-Alpes Tourism; Gerald Ong, Aviation Marketing Director, Istanbul Sabiha Gökçen Airport; Buddy Anslinger, Director, Ricondo & Associates, Inc; with the panel moderated by Jonathan Ford, Aviation Development Editor of anna.aero. Each panellist spoke in turn about case studies for their airports and organisations and how they work with stakeholders in the region to attract the new services, with Souter commenting on Stansted’s work with others to attract Emirates last year, with the MEB3 member launching a second daily service this summer. Flasseur spoke of Lyon’s success in attracting easyJet as a based operator, with Ong speaking on how Sabiha Gökçen is moving away from being just a LCC airport, with it now supporting services from the likes of Emirates and Qatar Airways. 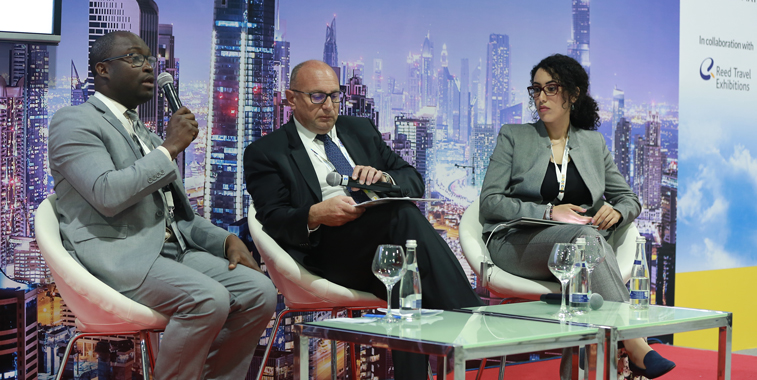 The second and final panel discussion of day two focused on the African market. Taking part in proceedings were Ahmed Coulibaly, Director of Air Transport, Côte d’Ivoire Civil Aviation Authority; Jean-François Guitard, Director International Development, Nice Airport; and Salima El Mghazli, Head of Distribution and Airline Partnerships Department, Moroccan National Tourist Office. “83.35 million passengers travelled to/from and within Africa in 2017,” commented Guitard. “This represents only 2% of global traffic, yet one billion people live within Africa, with this likely to double in the next 30 years, showing how much potential the continent has.” Speaking on one of the key issues, taxes, was Coulibaly. “African routes have up to three times higher taxes then those in Europe which have the same sector length.” El Mghazli also added that another issue is the regulation of the market. “There is a great possibility for openskies in Africa, along with establishing new airline business models to capture the demand potential.” She also spoke of Morocco’s aspiration to be one of the top 20 tourism nations to visit in the world by 2020.The country saw 10 million tourists in 2010, with numbers rising fast. 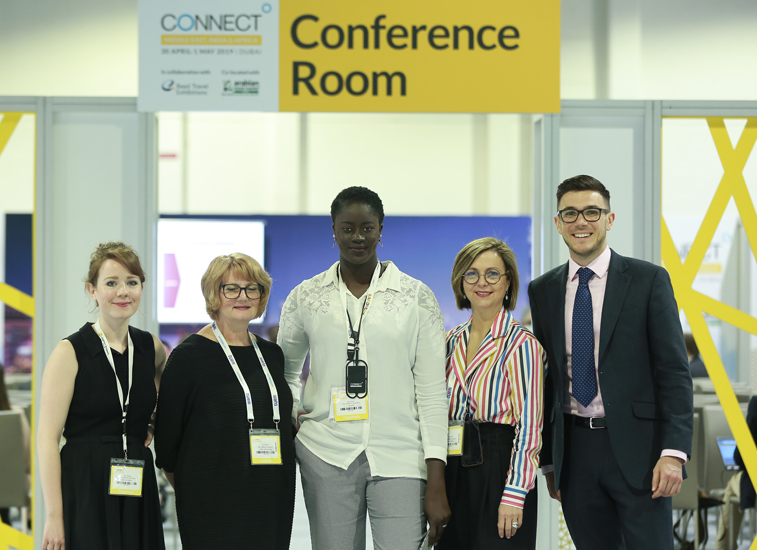