As we are now over one third of the way through 2019 (where has the time gone!!), it is time for anna.aero to start creating its overall leaderboard for the annual Arch of Triumph competition. So far, there have been six weeks of judged competition, with two also being decided by the public, with Aarhus in Denmark and Faro in Portugal taking the titles during the start of the S19 season. At present, four of the six airports to take the title are based in Asia, while one is no longer in operation for commercial flights, as Istanbul Atatürk sits at the top so far for the superb salute it gave IndiGo’s inaugural service from Delhi. However, with Budapest claiming this week’s win, Europe is starting to claw back to its winning glory days. Keep Monitoring!!!

Ryanair Budapest to Seville 2 May 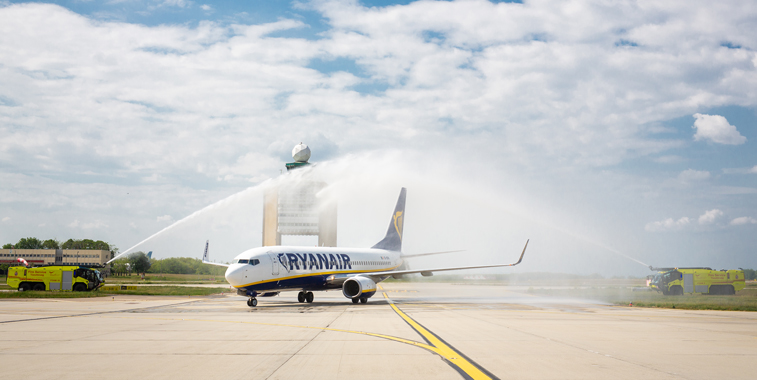 When the Spanish say ‘guau’ we say WOW! This salute is enough to melt the hearts of any aviator…

Judges’ Comments: Wow…wow…..wow! That’s all we can say when it comes to this spectacular water arch salute for Ryanair’s inaugural flight from Seville to Budapest. Both tenders seem to be aligned perfectly in the image, while the angle of the turning 737-800 gives the perfect shot for airline branding. Cloudy skies further enhance the quality of the image and gave the Hungarian air traffic controllers a pretty impressive sight. anna.aero would like to give the photographer a pat on the back. Well done!! 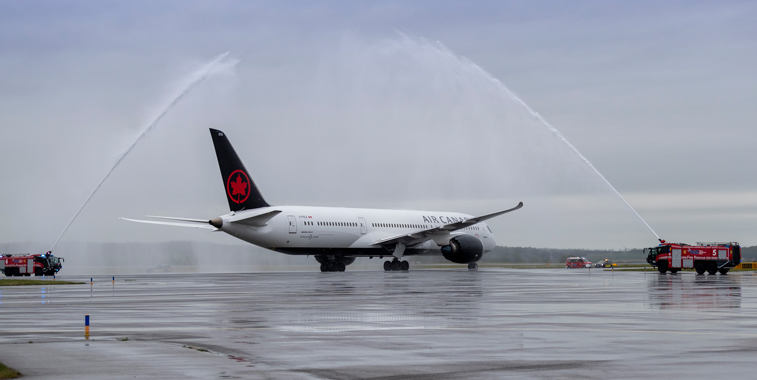 Wrong way round?… or was it supposed to be this way?

Judges’ Comments: We are surprised to see the sophisticated Austrians go for a Kim Kardashian FTWA to greet Air Canada. Despite the moderate weather conditions which compliment the darker shades of Air Canada’s livery, it is clear that the angle of this water arch salute just doesn’t seem right for an important inaugural service. Another thing to highlight is the presence of airside vehicles in Vienna wanting a sneak-peak on the water arch salute. 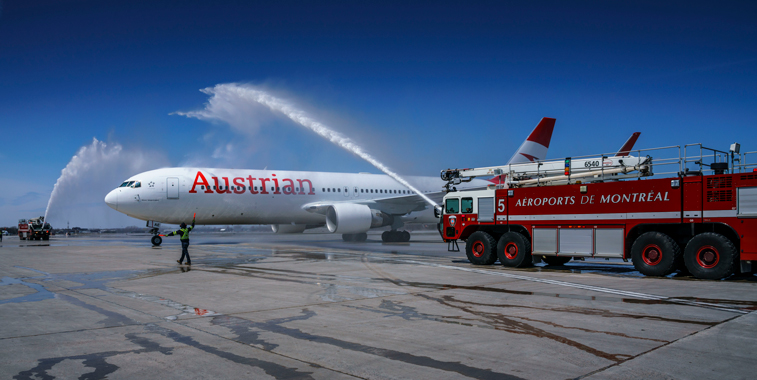 Judges’ Comments: The weather certainly looked beautiful for the arrival of Austrian’s Vienna to Montreal service, with sky a clear crystal blue. This plays into question how hard the airport’s firefighters attempted the arch before the aircraft’s arrival, as there is a number of water deposits on the apron. As they say, practice makes perfect, however, not this time… 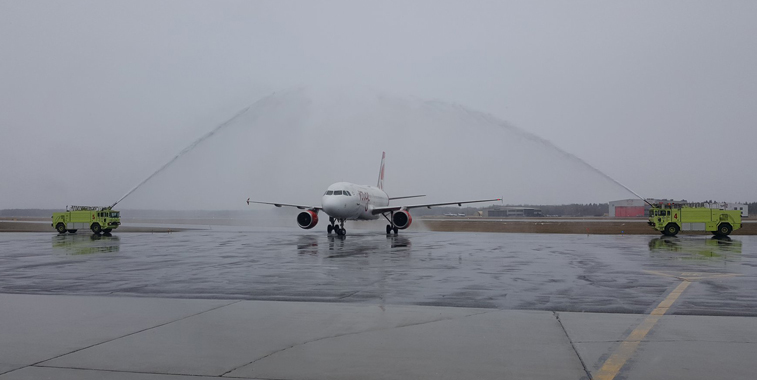 Thunder Bay is showing no sparks in this arch attempt.

Judges’ Comments: Air Canada Rouge was greeted with a downpour of rain, making this water arch salute somewhat pointless. Nevertheless, it is a good one. The close to perfect alignment of the water appears to show an almost perfect symmetry, but if the weather was a little on the brighter side, we think that this perhaps could’ve been a little better. 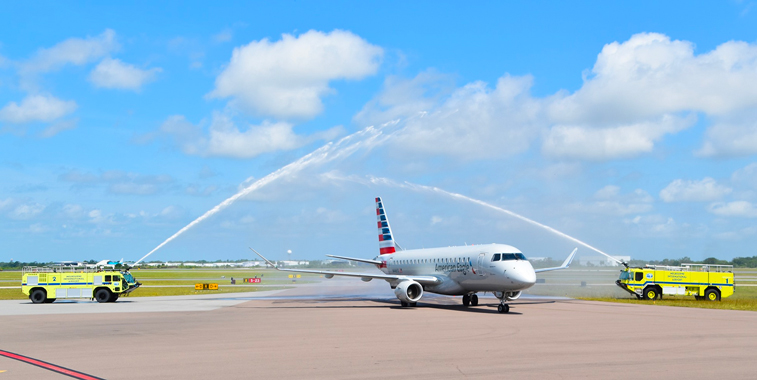 Judges’ Comments: It’s hard to get all the elements that the anna.aero judges are seeking in an FTWA right, however, we were excited with the image we received for this American Airlines inaugural flight which landed in Orlando Melbourne this week. No photobombs, perfect weather, almost clear skies and two tenders perfectly positioned to welcome the launch of this new route. Superb!

easyJet Berlin Tegel to Sylt 4 May 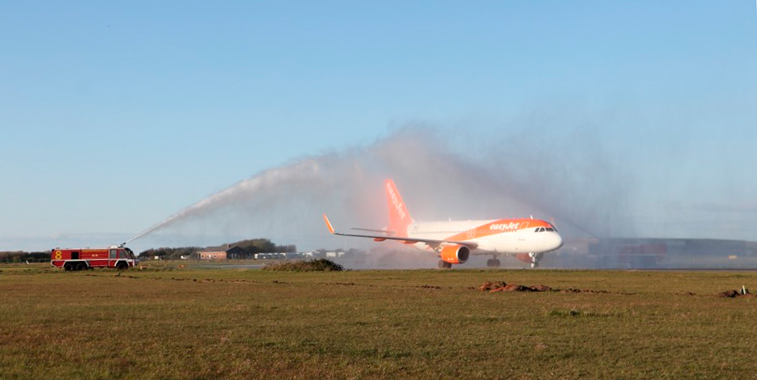 Put the horses away!

Judges’ Comments: The water arch salute of this easyJet flight seemed somewhat mediocre. Sylt definitely needs to work on the up-keeping of its runway and the surrounding areas, as this image conveys the ida that the aircraft has just landed in a field. While the easyJet livery seems illuminated, with the strong sunlight bouncing off it, the one tender shrouded in the mist of water route launch hydration has let the side down somewhat. 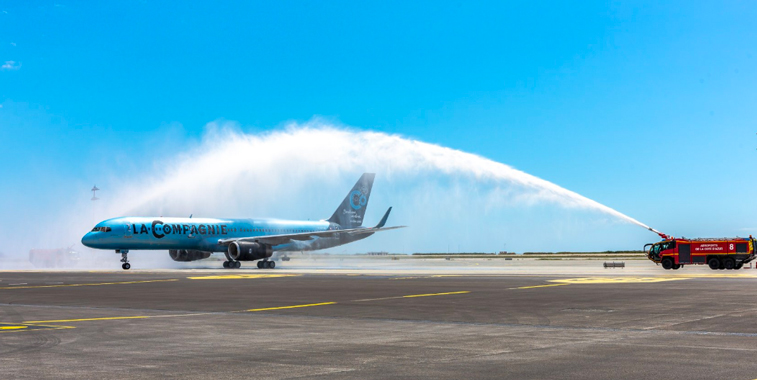 Judges’ Comments: La Compagnie is known for its unique and niche business, and it’s no surprise that the water arch salute to welcome the carrier to Nice was also very different in itself. Only one fire tender is visible in this image pumping gallons of water, while the other tender seems to have lost itself. Although a very impressive sight, we would have appreciated it if the angle of the image was better. Nevertheless, a good entry for the French.

KLM Amsterdam to Wroclaw 6 May 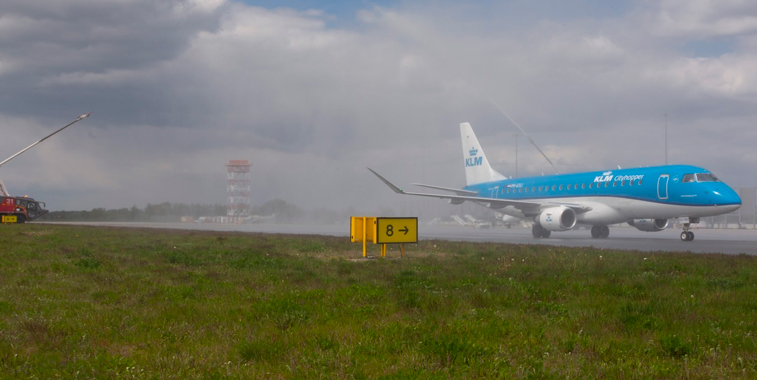 Stop! Maybe the photographer was too late? Or KLM crew were in a rush?

Judges’ Comments: KLM is always full of surprises and as an airline, has featured several times in our FTWA competition. This time however, we at anna.aero were left a little disappointed when we received this image. Either the photography was too late to capture the water arch salute, or the crew wanted to just get on with it and get to the gate in order for a swift turnaround. Another disappointing aspect is that the left tender has given up as the aircraft marched its way down the taxiway…