Ryanair celebrates 25 years at Manchester; from daily Dublin, to becoming airport’s top airline with 12 based aircraft and 64 routes in S19 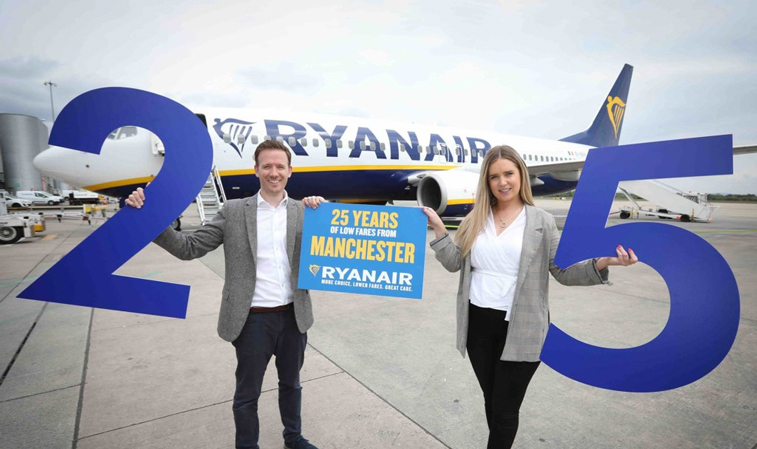 Ryanair recently celebrated its 25-year anniversary of serving Manchester Airport, where it has gone from offering a single route to Dublin, to flying 64 routes from the UK airport this summer. Pictured celebrating the milestone anniversary at Manchester in front of one of the 12 based aircraft the airline has at the airport are Robert Smith, Head of Aviation Development, Manchester Airport, and Eimear Ryan, Sales Marketing Executive UK & Ireland, Ryanair.

Ryanair and Manchester Airport recently celebrated the 25-year anniversary of the airline serving the UK airport. In 1994, the carrier launched a single route from Dublin. Today, the carrier has 12 737-800s based at the airport, with the ULCC offering 64 routes spread across 21 countries. This makes Ryanair the largest airline at Manchester as measured by available seats, accounting for 16% of the airport’s total seat capacity in 2018. While this shows an impressive relationship between the two parties, it has not always been that easy, with a bulk of this growth having come within the past eight years.

Back in 2009, Ryanair offered just over one million two-way seats from Manchester. That year Ryanair served Manchester from bases at Bremen, Brussels Charleroi, Cagliari, Dublin, Frankfurt Hahn, Girona, Marseille, Milan Bergamo, Shannon and Weeze. However, the failure to agree a new long-term deal with the airport’s executives at the time resulted in the carrier cancelling all but one route, a multi-daily Dublin service. This is the only route the airline offered from Manchester until S11, when the airline added flights from its bases at Alicante, Faro, Madrid, Palma de Mallorca and Tenerife South. Finally in W11/12, Ryanair reached a deal with the airport to open a new base where it stationed two aircraft initially, growing its network to 17 destinations. Bremen, Charleroi, Hahn, Girona and Milan Bergamo services returned, while routes to Katowice, Memmingen, Oslo Rygge, Paris Beauvais, Rome Ciampino and Rzeszow were added for the winter season too. 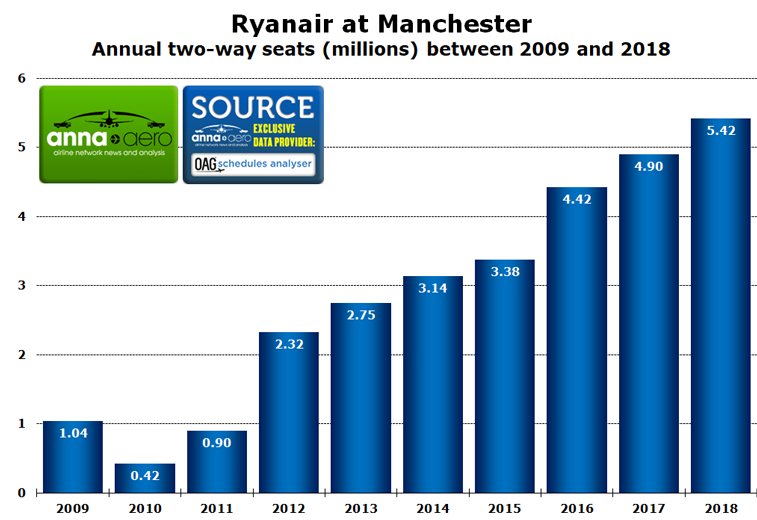 The growth continued in 2012, with a further two aircraft and eight routes being added, taking the total route count to 25 in S12. The airline has continued to add capacity each year, growing annual seat capacity by 133% between 2012 and 2018, with an average annual increase over the six-year period of over 15%. This growth has resulted in Manchester becoming Ryanair’s ninth largest base, with only London Stansted, Dublin, Milan Bergamo, Barcelona, Madrid, Brussels Charleroi, Rome Ciampino and Berlin Schönefeld seeing more advanced operations in 2018. Growth is also part of the agenda for this summer as well, with OAG Schedules Analyser data showing that Ryanair will offer 11% more seats this summer than it did in S18. Ryanair is offering 64 routes from Manchester in S19, including the next new route addition – Poitiers – a service which will begin on 5 June.

It’s no surprise that Dublin is the busiest route for Ryanair from Manchester, offering 37 weekly departures this summer, with six daily flights on Mondays and Fridays, with five on the other days of the week. Of the 64 routes which Ryanair operates from Manchester, 15 see at least one daily rotation, with seven of these being routes to Spain, namely Alicante (19 departures), Palma de Mallorca (18), Barcelona (14), Malaga (14), Ibiza (nine), Tenerife South (nine) and Madrid (seven). 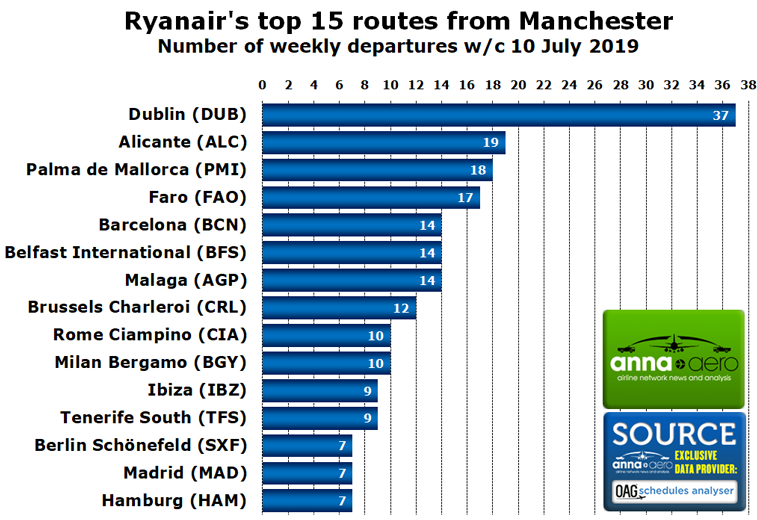 Outside of the top 15 routes, Ryanair’s average weekly frequency per route from Manchester is 3.08. This year, Ryanair has already added the following new destinations from Manchester: Billund; Bordeaux; Gothenburg; Kiev Boryspil; Marrakech; Marseille; Nantes; and Thessaloniki, while services to Murcia have moved to the new Murcia Corvera Airport. Ryanair will add more routes to its Manchester portfolio for W19/20, with services planned to Prague and Milan Malpensa, while Katowice flights will return after a five-year hiatus, having ended after a three-year stint in March 2014. 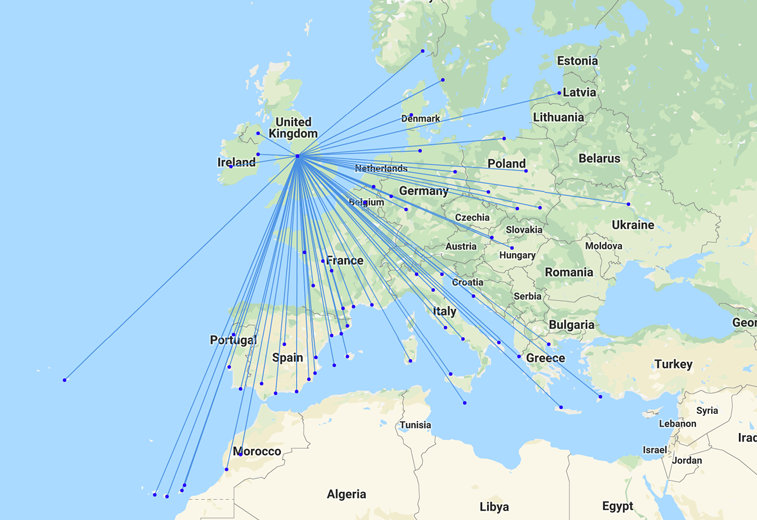 Ryanair’s route network from Manchester consists of 64 destinations this summer, with the most recent addition being Poitiers in France, a service beginning on 5 June. The airline has 12 aircraft based at Manchester in S19.