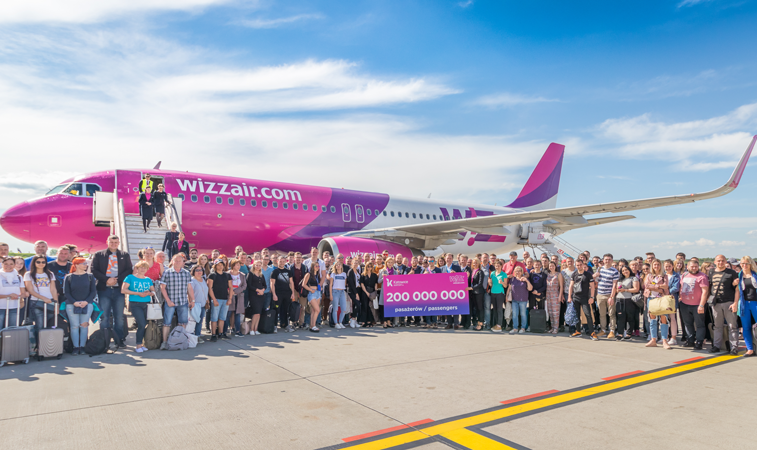 Wizz Air recently celebrated passing the 200 millionth passenger milestone, as well as the 15-year anniversary of its first flight,  a route from Katowice to London Luton. Today, the carrier has grown to an airline transporting over 30 million passengers per annum, while in 2018 it recorded an average load factor of 92%.

Wizz Air recently turned 15 years old, and celebrated carrying its 200th millionth passenger. Its first route was a connection between Katowice and London Luton back in 2004. Today, the airline has grown to be a carrier transporting over 30 million passengers a year, flying 33.81 million in 2018 to be exact. From this single route, the airline is now the sixth largest low-cost airline in Europe, sitting behind Ryanair, easyJet, Norwegian, Vueling and Eurowings, measured by total seat capacity being offered last year by each carrier. However, the airline is likely to pass Eurowings this year as its growth continues, with it having flown just 100,000 fewer seats than the German LCC in 2018.

Half of all passengers carried since 2015

While Wizz Air has just carried its 200 millionth passenger since 2004, it should be noted that over half of these passengers have flown with the airline since 2015, with the ULCC having transported 104.05 million passengers in the 48-month period from January 2015 to December 2018. In 2015, Wizz Air flew 19.18 million passengers, growing to the reported 33.81 million last year. This represents an increase in annual passenger numbers over the four-year duration of 76%. During the same era, the airline’s average load factor has also increased from just under 88% to 92%, rising by 4.6%. 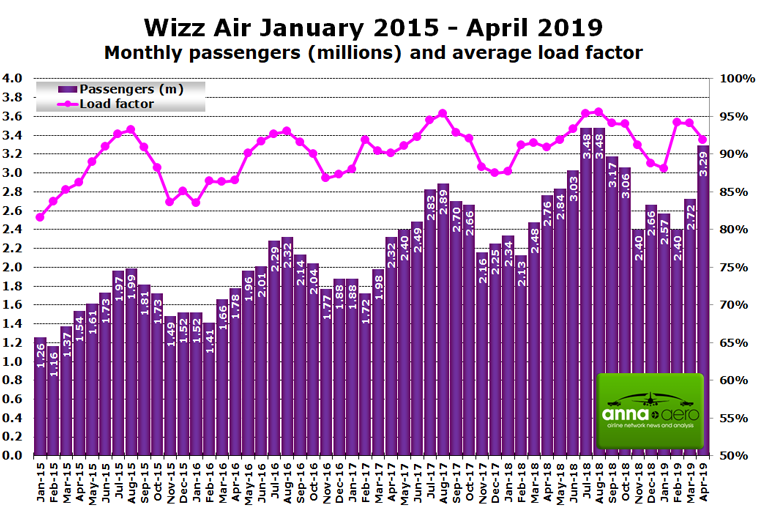 The carrier is continuing its push for growth into 2019 as well. During the first quarter of 2019, Wizz Air transported 7.69 million passengers, up 11% versus the 6.94 million it flew during the same period of 2018. During this time, the airline has also reported a solid 2.0% increase in its average load factor, going from 90% to 92%.The growth is set to continue in S19, with Wizz Air expected to operate just over 14% more seats than it did in S18, with 27.11 million currently flied under OAG schedules, up from 23.68 million.

Poland is Wizz Air’s largest country market, accounting for 13% of the airline’s total seat capacity this summer. However, the nation’s market share has fallen by one percentage point since S18. Wizz Air continues to grow its operations from Poland, having recently opened its newest base at Krakow. However, regarding the biggest nations for the ULCC, it is the UK which continues to make strides, overtaking Romania to become the airline’s second largest country market this summer. Wizz Air has increased its UK seat capacity by 20% in S19. The airline has up to 11 based aircraft at London Luton, its largest airport operation across its whole network, while it has also grown capacity from other airports that it serves in the UK, including Doncaster/Sheffield (36% growth in S19), London Gatwick (231%), Liverpool (67%), Birmingham (6.0%), Bristol (19%), Aberdeen (45%) and Belfast International (24%). The one UK airport to see a reduction in capacity by Wizz Air this summer is Glasgow, with capacity down 20% versus S18. 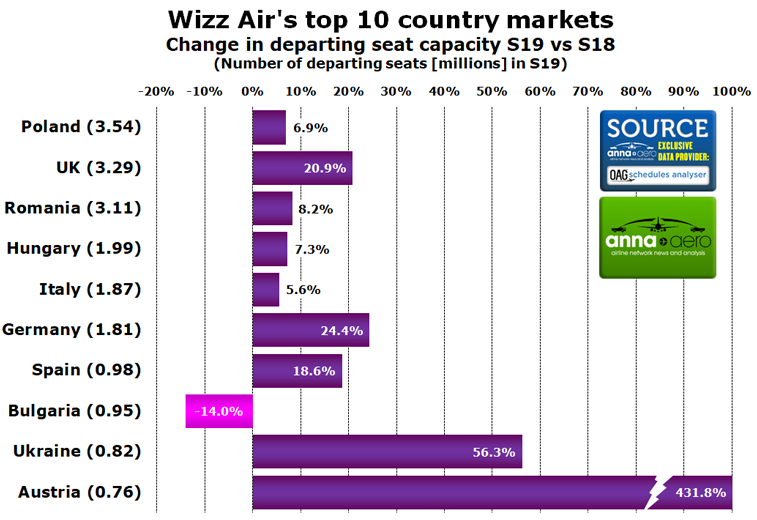 Elsewhere the carrier is showing strong developments across most of its leading country markets, with Austria climbing up into the top 10 as a result of Wizz Air’s base opening at Vienna last year. However, one market showing a downfall is Bulgaria. While Varna is showing a 7.6% rise in capacity, with Wizz Air stationing a second aircraft at the airport this summer, the airline’s seat offering from Sofia has dropped by 19% versus S18 based on OAG schedules, while Bourgas is reporting a small 0.6% reduction. The airline has dropped three routes from Sofia since last summer, namely Athens, Rome Fiumicino and Varna.

When looking at the airports Wizz Air serves, two of its top 12 airports are still not bases for the carrier, with Dortmund and Eindhoven making appearances (highlighted in pink). Both will see double-digit growth with the carrier in S19. While Poland is the airline’s top country market, when it comes to bases it is only when we get to airport four that we see a Polish destination, with Warsaw Chopin supporting just over one million departing seats this summer. The biggest jump up the list is of course Vienna, with the Austrian capital, which only joined the network in 2018, becoming Wizz Air’s sixth largest base. Another base appearing in the top 12 for the first time too is Kiev Zhulyany, climbing to 11th after a 40% increase in capacity this summer. Wizz Air’s new base at Krakow, an airport which is also new to the network, places as the 28th largest airport operation for ULCC this summer. 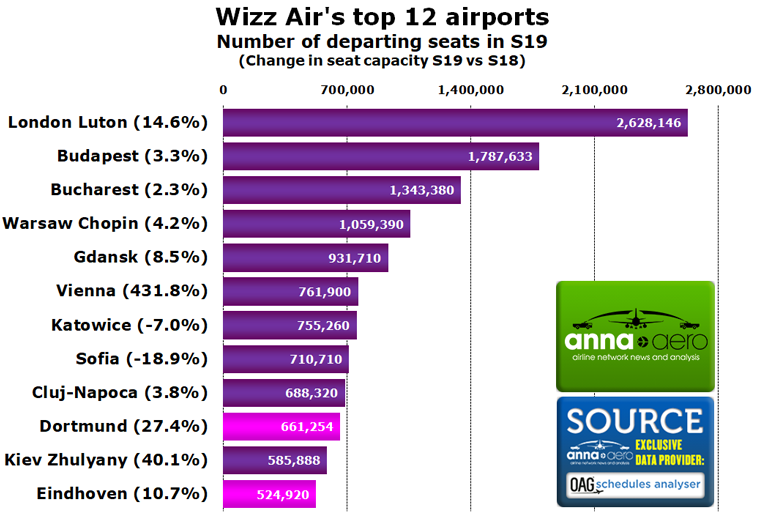 Airports which just miss the cut for the top 12 are Skopje (0.52 million departing seats in S19), Tel Aviv (0.44 million) and Milan Bergamo (0.39 million), with the latter two also not being Wizz Air bases. While the UK is the top market, the power of London Luton is evident, with the second largest UK airport in the list placing at 33rd among Wizz Air’s biggest airports – Doncaster/Sheffield. 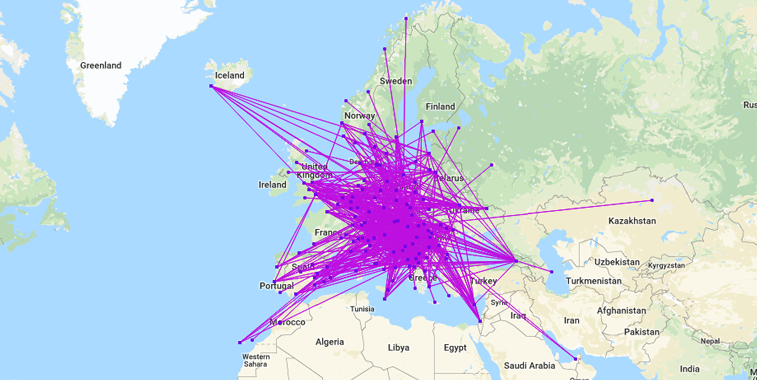 Wizz Air has certainly got one of the most stretched networks of Europe’s ULCCs, with its destinations ranging from Reykjavik/Keflavik in Iceland, down to Dubai in the UAE, across to Nur-Sultan in Kazakhstan and to Tenerife South in the Canary Islands. For S19, Wizz Air will grow its seat capacity across its network by just over 14%.