US airports are certainly hitting the money, with 2018 marking the first year in which the country encountered over one billion airline passengers, based on data obtained from the Bureau of Transportation Statistics (BTS).

ACI North America’s airports are heading to Nashville where they have scheduled 1,348 meetings with 31 airlines at the JumpStart Air Service Development Conference, 3-5 June 2019, and where anna.aero is the Official Media Sponsor. This is a good time to examine data published by the Bureau of Transportation Statistics (BTS) which shows that US airports handled 1.01 billion scheduled passengers in 2018, the first time that the country’s airports have achieved this feat. The result for last year marks a 4.9% increase in passengers versus 2017, a year which saw just under 964.7 million passengers. The result means that on average, US airports handled 2.77 million passengers per day last year, with this figure having increased from 2.16 million in 2009. With that, US airports are processing 614,000 more passengers a day than they were 10 years ago. 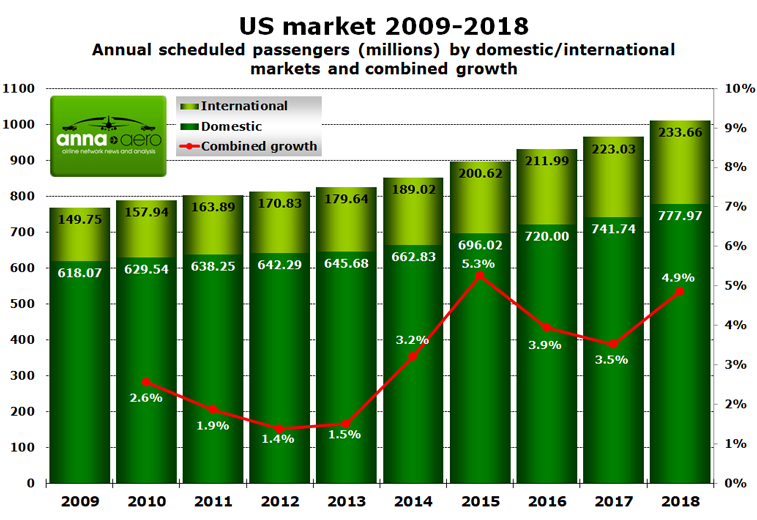 Last year was the second most successful year for growth for the US market during the past decade, only being surpassed by the 5.3% upsurge in passengers seen in 2015. Since 2009, on average the US market has grown by 3.1% year-on-year. Splitting the market into domestic and international sectors, it shows that the number of people flying on non-domestic services has grown at twice the US average as those that fly on internal services. Domestic passenger numbers have grown on average by 2.6% year-on-year since 2009, while international traveller numbers have reported a 5.1% rise. As a result, the market share of travellers using international services has gone from just over 19% of all passengers in 2009 to 23% in 2018.

In the US, some 43 airports handled over 10 million passengers last year, with the top, of course, being the world’s busiest airport – Atlanta – which handled 107.38 million passengers in 2018. Following Atlanta, the US’ top airports include Los Angeles (87.53 million passengers in 2018), Chicago O’Hare (83.25 million), Dallas/Fort Worth (69.11 million) and Denver (64.49 million). However, when it comes to growth, it is the airports further down the rankings which are seeing the biggest gains. Of the US’ top 40 airports, five reported double-digit growth in 2018. The fastest-growing airport was San Jose, where passenger numbers grew by just under 15% last year. It is followed by Austin (14%), Nashville (13%), Fort Lauderdale (11%) and Sacramento (10%). Of the top 40, three reported drops in passenger traffic last year. 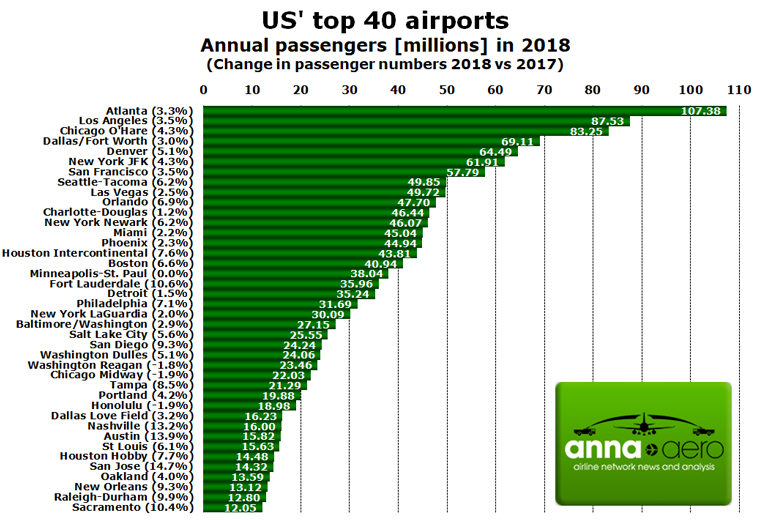