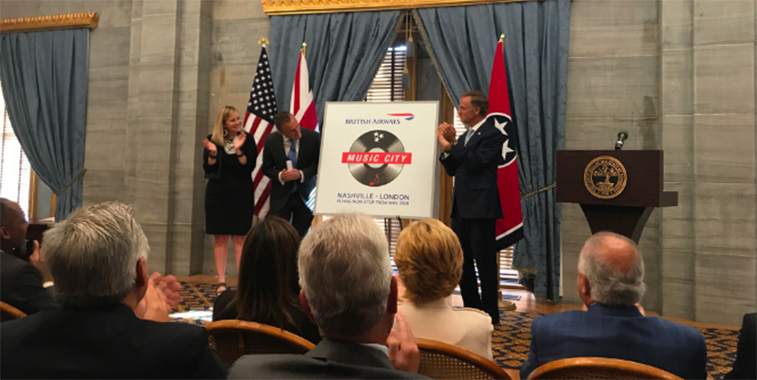 Named after Francis Nash, a general of the continental army during the American revolutionary war, Nashville was founded in 1779 and is today renowned as a centre and foundation built on music. Music has been the common thread connecting the life and soul of the city and its people and has been a major drive for tourism. Through this drive, Nashville International Airport has experienced impressive growth and this is a trend that is showing no signs of stopping. During Q1 2019, Nashville handled just shy over 4.2 million passengers, a rise of 15% versus the same three-month period of 2018. 2018 was also the third calendar year in a row to add more than one million additional total passengers, and the first calendar year to exceed one million passengers in every month.

Nashville International Airport smashed through its previous passenger record and announced a new calendar year figure with nearly 16 million passengers served in 2018. While the main catalyst for this growth varies, with a 13.2% increase from the previous year, it’s enough to highlight that the commencements of new routes has put Nashville on the map and as a potential city-pair. Summer and autumn are two integral seasons which have driven the growth for the city for various reasons. The city is ablaze with many concerts and festivals in music city and has temperatures reaching an average of 30-32 degrees. According to OAG Schedules Analyser the heat and brisk autumn air resulted in over 550,000 passengers arriving to the city from Atlanta, Georgia in 2018 alone. Despite the city being known for having an abundance of musical philosophy attached to it, visitors can also experience a variety of food and wine celebrations, sporting events, and impressive architecture. In addition to the city’s increased popularity, Nashville also faced a positive increase in residents by 50% to Downtown Nashville between 2010 and 2017, according to an official source. 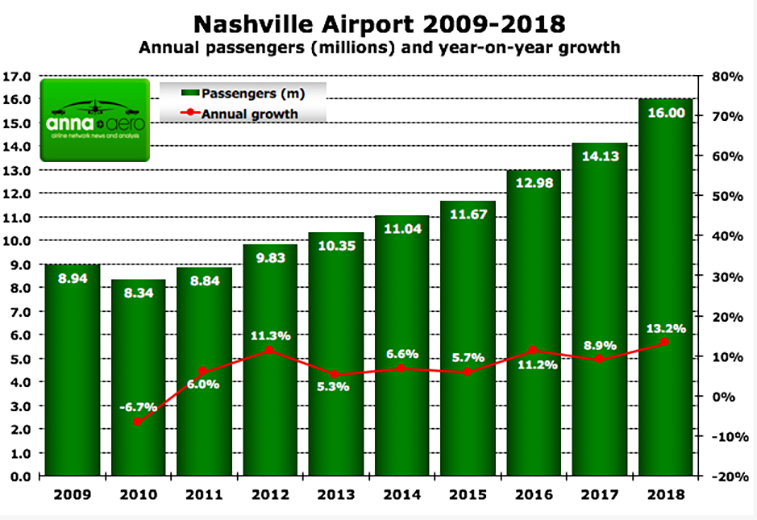 Nashville International Airport almost hit the 16 million passenger barrier in 2018, up 9% versus 2017, and a staggering 79% higher than the 9 million passengers it handled in 2009. The airport has witness a steady growth of traffic over the last decade, but most notably 2012 and 2018 seen the highest growth figures with 11.3% and 13.2% respectively.

Nashville Airport launched a number of new initiatives and services in 2018 to continue the notable growth it has witnessed over the last decade. These include the opening of an expanded and upgraded interim international arrivals building and breaking ground on the airport’s concourse D and terminal wings expansion project. In addition to this, the opening of a new $327 million terminal lobby renovation and international arrivals facility project, which is one of the airport’s largest investments to date, will act as the largest component of the BNA Vision and its dynamic growth in enhancing several elements within the airport’s customer experience.

Southwest dominates the leaderboard with over 4.5 million seats in 2018

Southwest Airlines continues to top the leaderboard in 2018, and has done so for the last decade. The primary reason for this may be because of the LCC’s initiative to fill the void left by American Airlines following on from the 1990’s recession in which the LCC took advantage of the subleasing from the FSC. However, this may have been a catalyst for the carriers continued domination within Nashville amongst the top ten airlines, many of which are FSC. According to official resources, in a bid to further enhance connectivity and gain market share, Southwest began nonstop services to Atlanta in 2018, and announced four new destinations for Nashville to Oklahoma City, San Jose, Burbank and Omaha. Additionally the ULCC further announced an increased service to Boston, Detroit, Las Vegas, Minneapolis, San Diego and St. Louis. 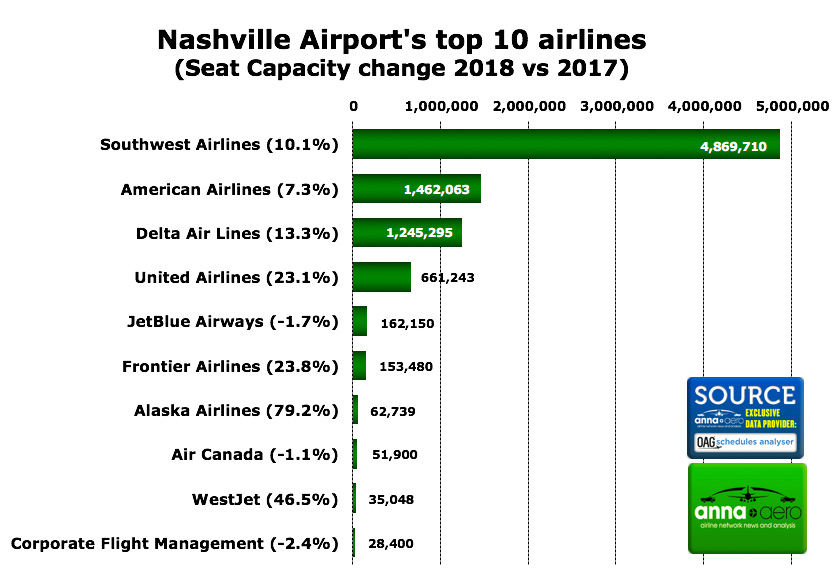 According to OAG Schedules Analyser the Nashville Airport’s second largest airline is American Airlines, with the One World member operating ten routes to Nashville, including a 12 times weekly domestic service to Los Angeles. Southwest Airlines also serves this particular route with 14 weekly flights, while Delta Air Lines is the third from the top three with 11 weekly flights. While it is notable that the three carriers topping the leaderboard share a combined market share of approximately 87%, a number of new entrants have also made their mark in Nashville, with Alaska Airlines overtaking the top three with the highest percentage of seat capacity growth with 79.2% in 2018 from 2017. Corporate Flight Management also known as Contour Aviation reported a small drop in seat capacity in 2018 at -2.4%. However, with the airline being a charter operator it is inevitable that due to the development of Nashville and of the divided market share, the need for an on demand seasonal and charter service with a fleet of gulfstream and falcon aircraft becomes redundant, as the figures show, due to the aircraft capacities and heightened competition amongst other carriers.

As the development of traffic to Nashville improves, British Airways became one of the newest FSC to operate a non-stop service between Nashville to London in mid-August 2018, starting with a five times weekly service. According to OAG Schedules Analyser on 31 March 2019, Thursdays and Sundays were added to the 6,709 kilometre sector, with the schedule increasing flights and commencing daily operations between the two cities. The transatlantic city-pair resulted in 36,000 passengers travelling in 2018 alone, whilst the OAG database shows a positive growth so far this year with 11,130 seats being flown in Q1 of 2019. 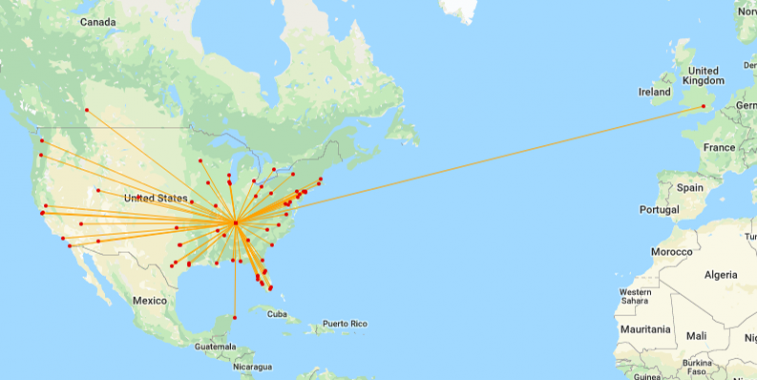 Nashville’s route map shows the importance of the USA as a market and clearly highlights London Heathrow as an important transatlantic route and gateway into Europe. The route between Nashville and London is one of the biggest route launches for the city with a daily service to the city from the largest European international hub which was commenced 31 March 2018.