Laudamotion opens its latest base in Palma de Mallorca 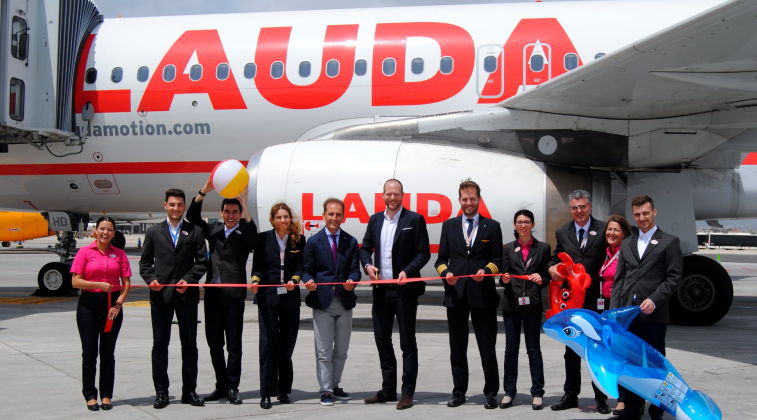 Laudamotion has opened a new base in Palma de Mallorca. According to OAG Mapper, the Austrian ultra low-cost carrier -founded in March 2018 by the sorely missed Formula One legend, entrepreneur and pilot Niki Lauda – will serve 12 destinations across Germany and Austria in S19 from the Balaeric island hub, including Erfurt-Weimar and Dresden which were launched this week. 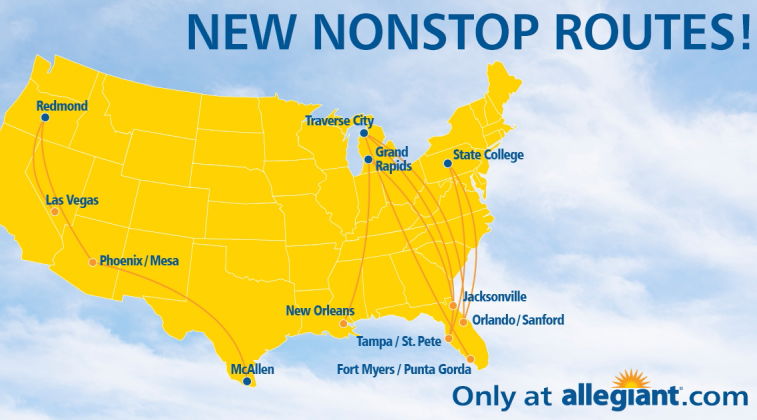 Allegiant this week announced year-round services to St Petersburg-Clearwater from Traverse City, MI and State College, PA. The routes, launching on October 16 and 18 respectively, come as the carrier launched a 10-route bonanza today operating from winter 2019. St Petersburg Airport Director Tom Jewsbury said of the launch “We are excited to launch new service to Traverse City, MI and State College, PA in the fall…we hope travelers will enjoy venturing from the beauty and active lifestyle of Lake Michigan to the beaches and arts of St. Pete-Clearwater! Connecting to Penn State’s main campus with the addition of State College, PA is an excellent opportunity for students and alumni traveling to/from Tampa Bay”. 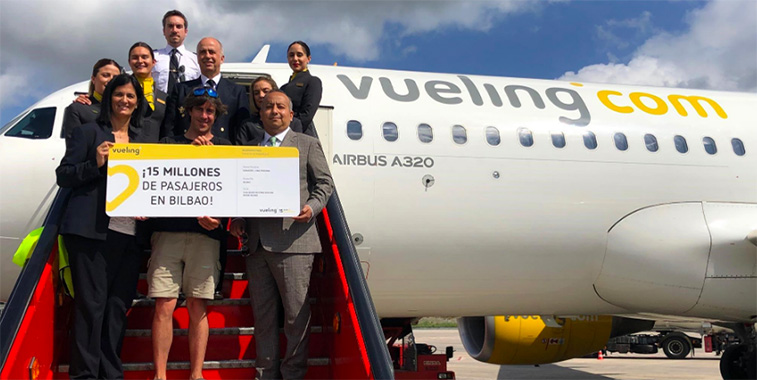 On 14 June, Vueling celebrated carrying 15 million passengers transported at Loiu Airport in Bilbao! Leaders since 2010, Vueling’s presence has been growing in the Basque territory for the last 10 years and has enabled the LCC to reach 40% of the market share. This stake will be further increased this summer with the opening of three new connections from Loiu: A Coruña, Oporto and Florence. 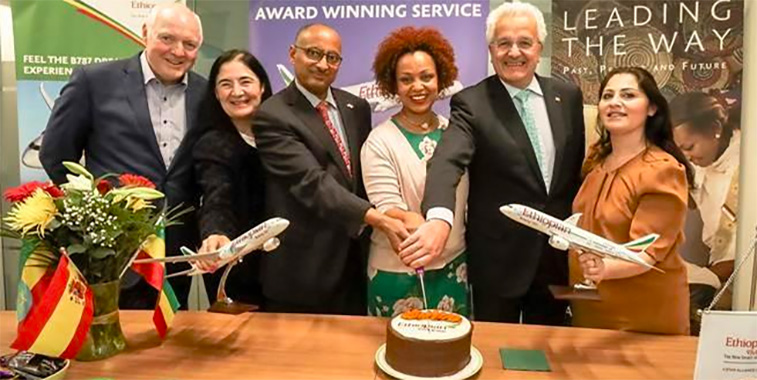 Ethiopian Airlines has succeeded in gaining fifth-freedom rights between Dublin and Madrid. This route exists as an extension of Ethiopian Airlines’ existing service linking Addis Ababa to Dublin. 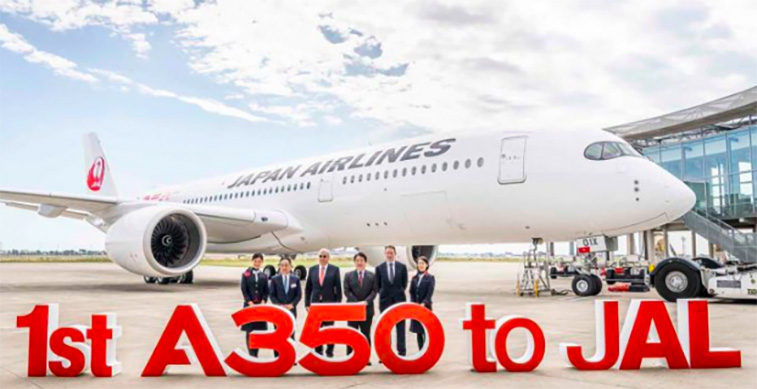 Japan Airlines took delivery of its first A350 XWB at Airbus in Toulouse, France. The A350-900 is the first aircraft produced by Airbus for JAL. The milestone event was attended by JAL Representative Director and Chairman Yoshiharu Ueki and Airbus’ Chief Commercial Officer Christian Scherer. The A350 XWB is the world’s most modern and eco-efficient aircraft, shaping the future of air travel. It is the long-range leader in the large wide-body market (300 to 400+ seats). The A350 XWB brings a 25% reduction in fuel burn and emissions, while also featuring the Airspace by Airbus cabin for the most comfortable flying experience. 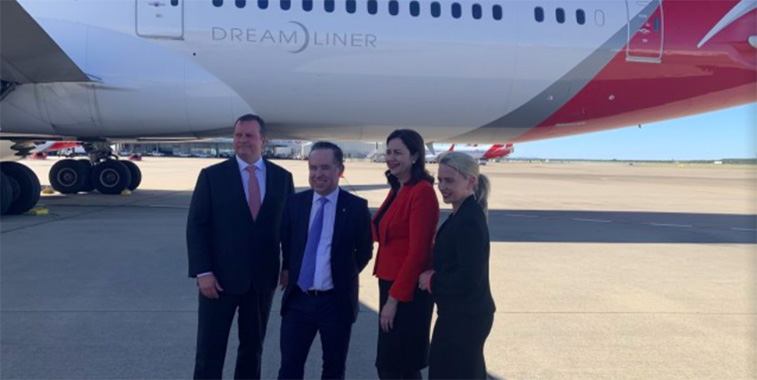 Brisbane Airport will be the first and only port in Australia with direct flights to and from Chicago following confirmation that Qantas plans to commence a four-times weekly direct service by the end of April 2020, pending approval of its joint business with American Airlines from the United States Department of Transportation. The airline has also revealed plans to launch three-times weekly flights between BNE and San Francisco, also set to launch by the end of April 2020. This will be the first time these two cities have had non-stop services from Queensland with Qantas scheduling its state-of-the-art Boeing 787-900 Dreamliner aircraft on each route. 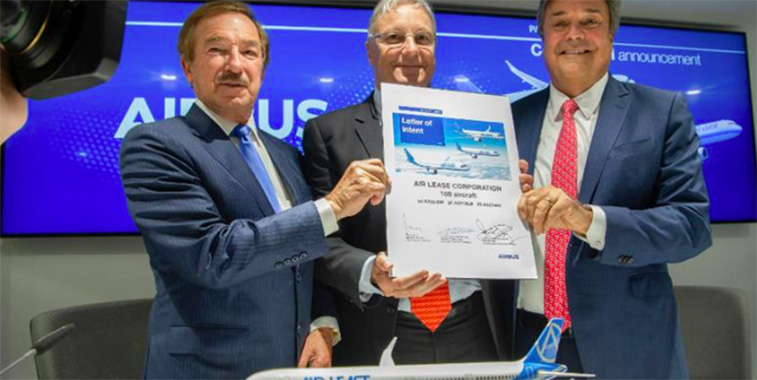 Airbus beat Boeing to land 100-plane deal at the Paris air show. Airbus won an order for 100 aircraft from Air Lease Corp, one of the world’s most closely watched jet purchasers. The order includes 27 A321 XLR, a model that was unveiled Monday, 23 A321neos and 50 of the A220 jetliner that Airbus acquired from Bombardier Inc. The list price of the baseline A321 is $129.5 million, while the smaller A220 goes for as much as $91.5 million, valuing the total order at $11 billion before customary discounts. To mark the momentum (Left to right) Steven Udvar-Hazy, Air Lease Executive Chairman;, Christian Scherer, Airbus CCO and John Plueger, CEO, Air Lease were on hand. In addition to this International Airlines Group (IAG), the parent company of British Airways and Iberia, in a surprise bid announced its intention to acquire 200 Boeing 737 MAX jets. The deal, made public during Paris Air Show, is valued at more than $24 billion at list prices. It is the first sizeable order for a commercial airplane received by Boeing since the MAX grounding. 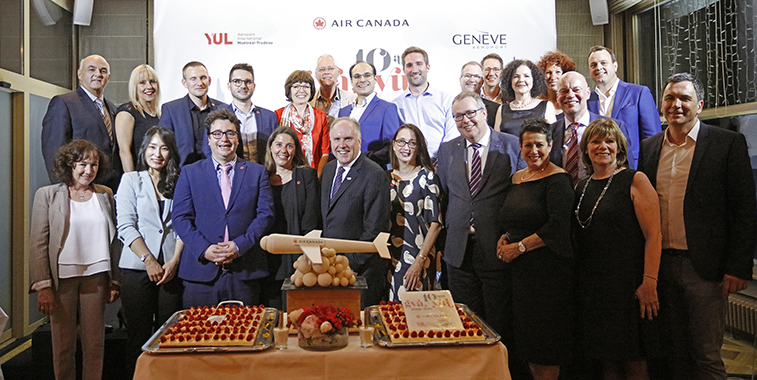 On 05 June, Air Canada celebrated the tenth anniversary of operations between Geneva, Montreal and Toronto.
120 participants took part in the evening organised at the restaurant of Parc des Eaux Vives. Many partners took the floor on this occasion, including the directors of the Geneva and Montreal airports. The celebrations were followed by an evening full of fun, food and laughter while singer Azania from The Voice, delivered a spectacular performance for the attendees present.