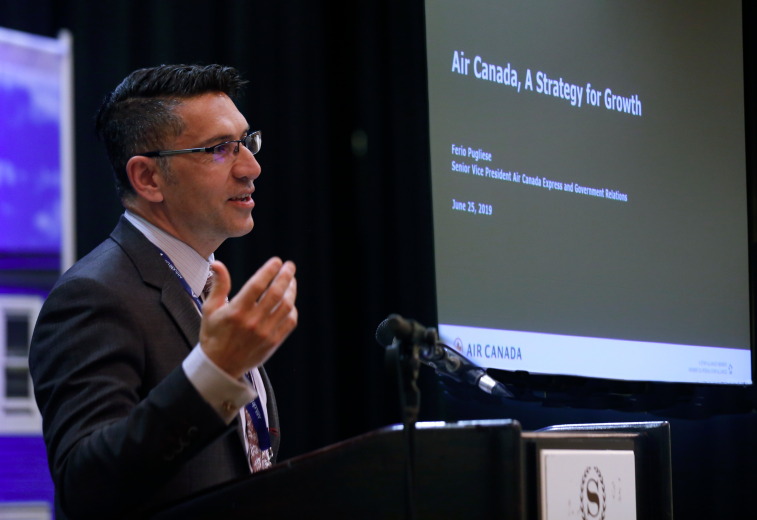 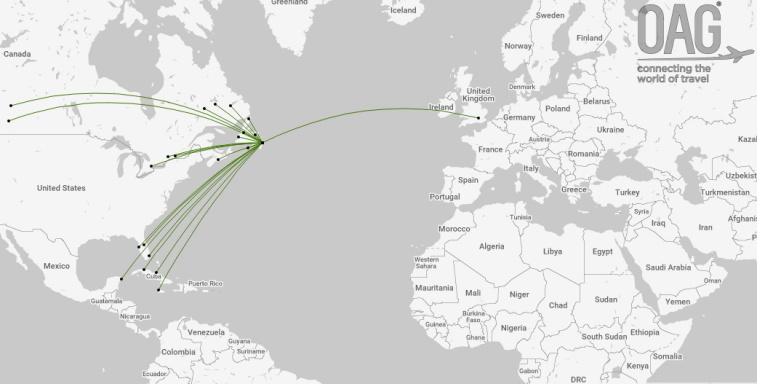 According to OAG Mapper, 21 destinations across North America, Mexico and the Caribbean are served by five carriers from St John’s in S19 with Air Canada’s London Heathrow route currently being suspended following the grounding of the B737 MAX.

St John’s International is a market which has seen significant evolution over the past few years. Air Canada has launched transatlantic flights between St John’s and London Heathrow – at the time of writing temporarily suspended due to the Boeing 737 MAX grounding. This week, WestJet launched thrice-weekly seasonal services to Edmonton – St John’s largest unserved domestic market. However, there have been challenges for the airport, including demand leakage to other airports within Atlantic Canada such as Halifax in the case of WestJet’s London Gatwick service. 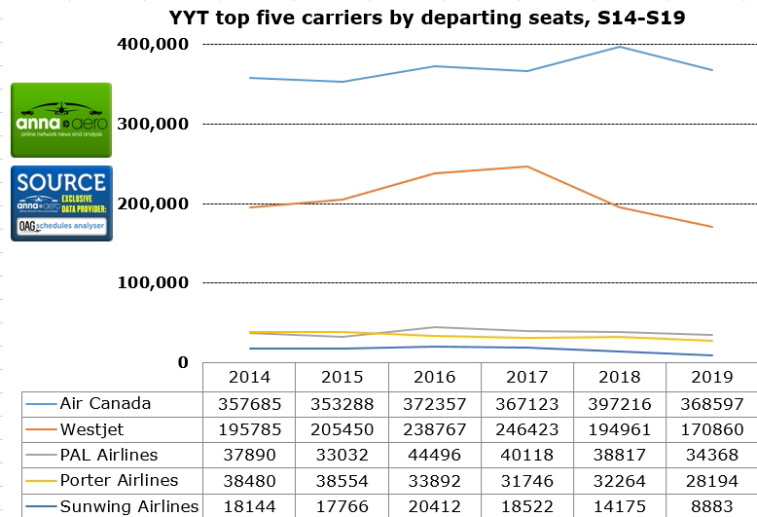 St John’s top five carriers by departing seats, according to OAG Schedules Analyser. It is important to note that Air Canada’s temporary Heathrow suspension and WestJet’s transatlantic move to Halifax have had an effect, and the service resumption of the daily 737 MAX service will inevitably bring an upflift to capacity. Summer 2019’s capacity figures are conditional until the season ends.

There is a promising future for St John’s, as well as the Newfoundland and Labrador region as a whole, however – recent and continued terminal expansion at the airport will unlock increased capacity, while the introduction in 2016 of CAT III ILS enables continued operation in all weathers. Such an upgrade is crucial with regular fog from the Atlantic, and cold, snowy winters previously suppressing demand in the winter season. This can be seen when inputting monthly passenger numbers into our SVID calculator. The two airports with harsher winters – St John’s and Halifax – have significantly steeper seasonal shifts than Ottawa, which benefits from being in a more southerly latitude. 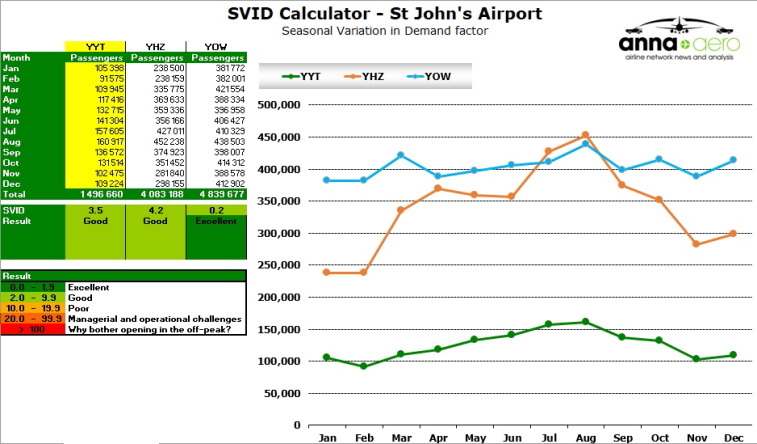 The 12th Altitude East Conference proved to be a bumper event for the route development community. Here is some of the main news, expert commentary and networking from this year’s proceedings.

Air Canada confirms reinstatement of transatlantic flights from St John’s upon 737 MAX return to service; sings praises of Airbus A220 in price-sensitive markets 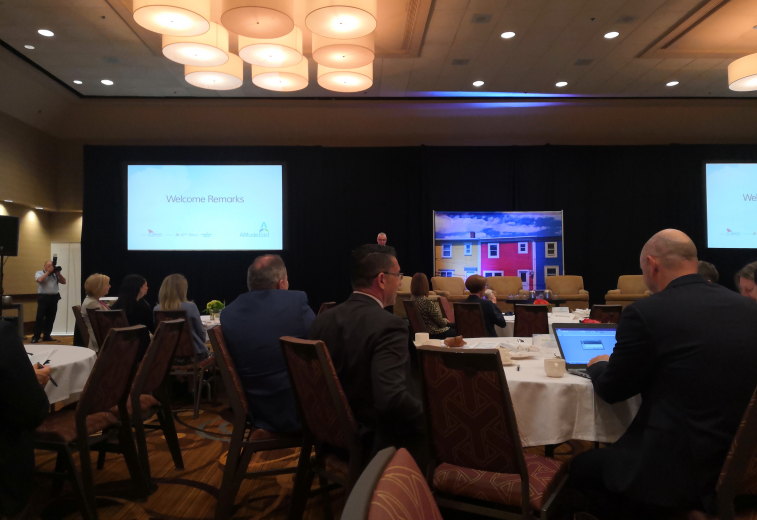 An enormous thank you must go to the team at St John’s International Airport Authority, and all the event sponsors, for making all the delegates so welcome – in particular the author, James Davis, for whom it was his first overseas conference as Assistant Editor. Whether it be the fascinating speakers, outstanding catering, to the evening networking events and performances by musicians and local theatre groups, St John’s were outstanding hosts for their first Altitude East event. Photograph credit: The Author.

A cheer went up in the Altitude East conference hall among the St John’s International air service development team and local government officials when Air Canada confirmed that its St John’s-London Heathrow service would return once the currently-grounded 737 MAX’s certificate of airworthiness is reinstated. Presenting the good news at the event was Ferio Pugliese, SVP Air Canada Express and Government Relations, who stated: “We are here to underscore that St John’s and Halifax to London Heathrow will return [upon 737 MAX re-entry into service].” According to the Star Alliance carrier, it currently serves 12 airports in the Atlantic Canada region and contributes some CA$21 billion to regional GDP. Ferio also covered future opportunities in his keynote speech, including the carrier’s upcoming Airbus A220, which he cited as “addressing seasonality issues in price sensitive markets…allows the potential to fly [them] year round”. Andrew Gibbons, Director Government Relations and Regulatory Affairs at WestJet cuts the ribbon with ground staff for the inaugural service between St John’s and Edmonton. According to St John’s Airport, the route had previously been the largest unserved domestic pairing from the Newfoundland capital. Photograph credit: The Author

Regarding the launch, Marie Manning, Director of Marketing and Business Development, St John’s International Airport Authority, said: “The links between Edmonton and St John’s are strong, and this new service that offers a fast and convenient way to connect these two regions has already been well received by the local market.” Tom Ruth, CEO Edmonton International Airport, added: “We couldn’t be happier with this new flight. There is a continuous flow of passengers between St John’s and the Edmonton Metropolitian Region, and we look forward to welcoming travellers…taking advantage of the work and tourism opportunities in both provinces.” According to OAG Schedules, the previously unserved 4,216 kilometre route is operated by WestJet’s Boeing 737-700/800 fleet, and is set to operate for the summer season until 26 October.

Stavanger, Oslo, Aberdeen, Suriname and Guyana have been touted as future destinations for St John’s on the back of a presentation and discussion at the conference by Charlene Johnson, CEO Newfoundland & Labrador Oil and Gas Industries Association (Noia). This comes as recent offshore surveys in the Atlantic off Newfoundland found an area of interest potentially containing billions of barrels worth of oil, with the industry expected to be worth up to CS$100 billion to Newfoundland and Labrador between 2019 and 2045. According to our Route Shop tool, Aberdeen is the third-largest international market from St John’s due to the substantial oil and gas industry shared by both cities.

Following the success of ULCCs Ryanair and Wizz Air in Europe, alongside that of US counterparts Spirit and Frontier, the Canadian market seemed relatively late to the game. Since 2018, however, there has been something of an avalanche of low cost start-ups, and a similarly strong response from Canada’s big two, Air Canada and WestJet. Flair, Jetlines, Moxy, Swoop and Rouge have all either been launched in the past two years or – in the case of the latter two – been spun off from mainline brands to provide a competitive response. Jetlines is set to commence operations in winter 2019, while Moxy, founded by David Neeleman who among other brands founded JetBlue and is a director of TAP Air Portugal, is set to launch operations from early 2021 having recently placed a firm order for 60 Airbus A220-300s.

A geographic characteristic of Canada which was highlighted repeatedly during the forum is the country’s low population density, spread over large distances. This makes the market ideally suited from a geographic standpoint for air travel – with terrain and the sheer distances involved excluding road or rail from many city pairs – but limits the size of it overall due to the low O&D demand stemming from that low population. As such, one question foremost on the minds of all on the panel, and participants from the audience, was whether Canada can sustain five LCCs within the market on top of established players Air Canada and WestJet in the coming years, and indeed if the traditional hub-and-spoke model utilised by Air Canada and WestJet lends itself better to the specific characteristics of Canada than that of low cost point-to-point. The issue of regulation was also highlighted in playing a significant role, with higher operating costs within the market than that of the US or Europe placing pressure on yields for lower fare operators, and the recently approved Air Passenger Protection Regulations introducing strict guidelines on communication and compensation in the event of disruption.

From the IATA perspective, technology is and will continue to play a pivotal role in the future of passenger and airport operations. The continued roll out of biometrics – already seen in automated passport control desks in Canada, the EU and US – is set to ensure a more seamless passenger experience, with the likes of London Heathrow now utilising automated boarding kiosks. Pierre also sited the introduction of autonomous or semi-autonomous ramp vehicles, such as “Mototok” tugs, as playing a role in improving turnaround times.

Eric continued the theme of technology, highlighting from Air Canada’s perspective the revenue generation potential of the Airbus A220 on thinner routes, while noting the launch of the A321XLR as a potential disruptor in the long-and-thin marketplace. Andrew Pierce concurred with this, noting the CASM reduction potential of the A220, Embraer E2 and A320NEO while encouraging from Porter Airlines’ perspective more technological development from the main turboprop players at De Havilland Canada and ATR to avoid lagging behind within the regional market.

Andrew Gibbons referred back to the previous ULCC discussion, outlining the rapid growth of this market in Canada, WestJet’s competitive response via the introduction of the Swoop brand and the evolution of WestJet mainline into a full-service network carrier. This comes as the carrier is set to bring its three-class Boeing 787-9 onto the Toronto-London Gatwick route in October, amid critical acclaim on the existing Calgary-Gatwick route.

Cake of the Week or Screech of the Week? Delegates from outside of Newfoundland and Labrador take part in local tradition at evening networking reception 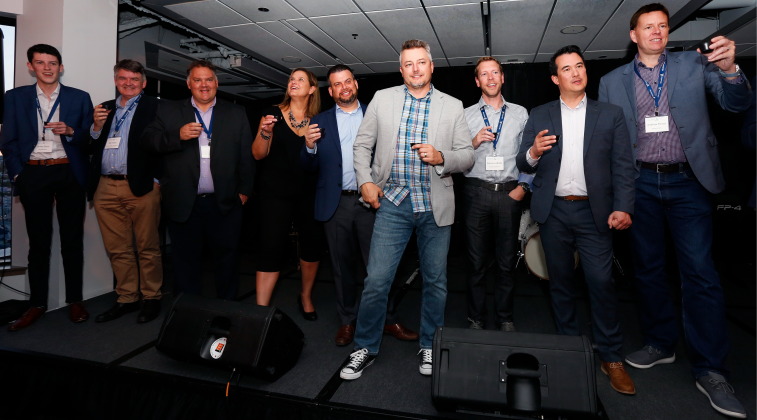 One of the quirkier aspects of the week was the traditional welcome to Newfoundland – where delegates were “screeched in” by kissing a freshly caught cod then drinking a shot of Screech Newfoundland Rum. Delegates took part in the evening’s festivities in high spirits, which also included a live band and a performance to remember from up-and-coming theatre group Spirit of Newfoundland.

With these developments, discussions and festivities it goes without saying that Altitude East 2019 has promised an exciting future for Atlantic Canada and the Canadian market as a whole – and for us at anna.aero, we cannot wait to see what the next Altitude East event brings!