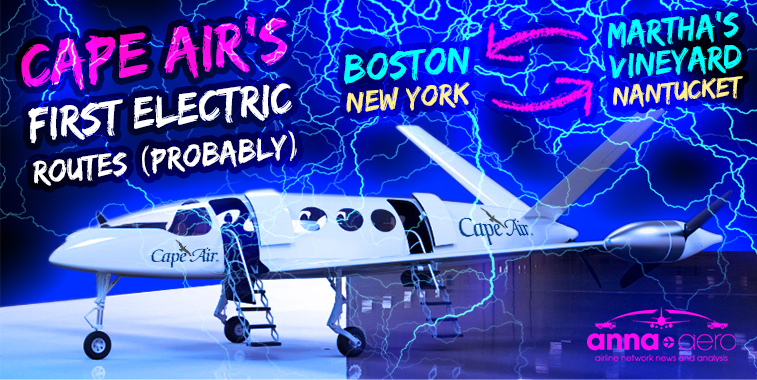 At Paris, Cape Air announced plans to order “double-digit” units of the Eviation “Alice” 10-seat commuter. Set to enter service in 2021, the Alice claims a game-changing 80% lower operating cost thanks to its fully-electric design. Boston and New York to Cape Cod destinations are likely route contenders within the aircraft’s 600 mile range.

At the Paris Air Show Cape Air, based in Cape Cod and serving resort communities including Nantucket and Martha’s Vineyard, announced a letter of intent to order a “double-digit” number of Eviation Alice aircraft. The nine-seater type, set to undertake its first flight later this year, will be the first fully electric aircraft to enter commercial service. This little aircraft marks the first step in IATA’s vision of achieving carbon-neutral net growth from 2020, and a 50% reduction in emissions from 2005 levels by 2050. The opportunities for profit are huge, removing the cost of jet fuel which is the single biggest cost for any airline, big or small.

Caribbean base: Moving south for winter

In 2018 Cape Air carried over 500,000 passengers with a fleet of over 80 aircraft (mainly Cessna 402Cs) operating mainline services complemented by interline agreements with American Airlines, jetBlue, United and Qatar Airways.

One feature that comes with the territory of being a commuter carrier in remoter regions is high seasonality. Cape Cod – the carrier’s home base being Hyannis, M.A – is no exception, experiencing pleasant summers with a thriving surf and fishing industry attracting tourists from across the globe, but harsh winters where passenger numbers plummet.

When three of Cape Air’s top Cape Cod destinations are entered into our Seasonal Variance in Demand (SVID) calculator, the extent of this challenge is pronounced. In the case of Nantucket, there is a seventeen-fold difference between the summer peak (32,000 passengers) and the winter trough (1,800 pax). Such a substantial difference in demand explains the significant seasonal changes in capacity for Northern routes, whilst Caribbean destinations have a flatter year-round capacity profile.

The mix in seasonality also reflects the route performance for the carrier’s top destinations. Large international hub cities that Cape Air serves such as Boston, St Louis and San Juan have stable year round demand, but smaller communities served have large spikes in demand over the summer months as Americans travel from the southern states up North to less humid climes. In winter, however, when temperatures drop, passenger traffic drops sharply, with loads struggling to reach the 40% mark.

Growth of Cape Air’s top five routes has generally flattened, with only the Caribbean San Juan – Saint Thomas service seeing continued capacity growth since W16. This reflects the strong performance of the carrier’s Caribbean routes, especially in winter months. Such routes were the top 7 by revenue in W18 according to OAG Traffic Analyser, and made up four of the top 10 routes by average fare in that period, indicating strong yield performance and high demand. All but one of the top 10 summer routes are based in the northern United States, reflecting the high seasonal variance previously discussed.

As such, given the low capacity, high unit cost commuter model of the carrier, along with high seasonality, the operating environment is challenging, limiting Cape Air’s ability to reduce fares in low season to stimulate demand. The introduction of next-generation electric aircraft like the Eviation Alice will reduce operating costs by 80% compared to existing rivals according to Eviation, thanks to reduced design complexity and fewer moving parts alongside zero fuel burn. Lower operating costs will allow Cape Air to reduce fares to stimulate demand, and make highly seasonal routes profitable year-round.