Doha Hamad International Airport plays a pivotal role in the Middle East aviation market, having served a total of 34.5 million passengers and handled 2,163,544 tonnes of cargo in 2018, up 8.4% on the previous year. This is some good news following the ongoing blockade imposed by neighbouring Gulf countries and the termination of several flights to Doha. However, others have been quick to fill the void left behind in order to take advantage of Hamad’s growing traffic demands.

When measuring indirect traffic to Doha Hamad in 2018, Cairo comes top as the largest unserved destination to Qatar. Several of these destinations, including Cairo, Dubai and Jeddah, are not currently served due to the suspension of diplomatic relations between those nations, among others, and Qatar since 2017. Three notable unserved destinations in the list not affected by these external political factors include Lucknow and Tiruchirapalli in India, and Sylhet in Bangladesh.

It’s no surprise that following the embargo on Qatar, Hamad has tried to diversify into other regions and destinations around the world, while also working to attract more capacity on remaining Middle Eastern routes. According to OAG, Kuwait was identified as the airports busiest route in 2018 with almost 1.15 million seats, while Muscat followed with 900,000 seats (one-way). South East Asia is also an important market, with Manila reporting a 9% increase in overall seat capacity between 2017-2018.

Filipinos currently make up 11% of Qatar’s population according to World Population Review and this market is key, especially as Doha’s huge migrant Filipino population is showing signs of steady growth. Indians top the demographics leaderboard, making up 25% of Qatar’s population. India has been a key market for Doha for some time due to the strong labour flows between India and Qatar. IndiGo, now holding additional slots at Hamad post-embargo, has become the top LCC to operate there, with the Mumbai and Delhi routes combined reporting over 4.2 million seats in 2018.

Hamad International Airport serves over 160 destinations from Doha to all corners of the world. The strongest concentration of routes is within Europe, with Qatar Airways’ Heathrow to Doha flight the 7th highest revenue route in the world according to OAG. The service netted a cool $700 million in FY2018, up $60 million on 2017 and snapping at the heels of rival hub Dubai ($829m). Over 15 Indian destinations are served from Doha, with Qatar the largest by seat capacity and low cost carrier IndiGo also having large presence in second. Qatar Airways’ longest flight from Hamad Airport in Doha is to Auckland, New Zealand with a sector distance of 9,031 miles. 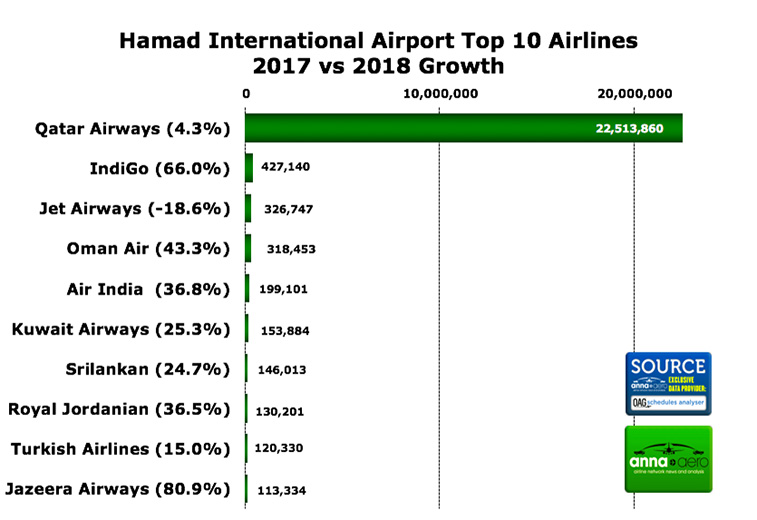 Qatar Airways is by far the leading airline as highlighted on the graph with the airline reporting over 22.5 million seats (one-way), an increase of 4.5% from 2017. Although Qatar remains the dominant airline from its Doha hub with a near 65% of the market share, LCCs have seen the strongest capacity growth since 2018. IndiGo’s seat capacity grew by almost 66%, while Jazeera Airways became another strong contender reporting almost 92,000 more seats in 2018 from the previous year; an impressive 81% increase. This reflects the continued growth of LCCs worldwide, even in traditionally premium markets like Doha. Other carriers have also reported strong growth at present, according to data filed with OAG with the forecast for 2018 illustrating that the airport’s capacity has grown again, and will continue to as Qatar prepares for the 2022 World Cup.