Copa or gold? Panama’s hub of the Americas

Panama is located within a seven-hour radius of all key areas of North and South America.  It’s a position that the country’s Copa Airlines has strongly exploited. 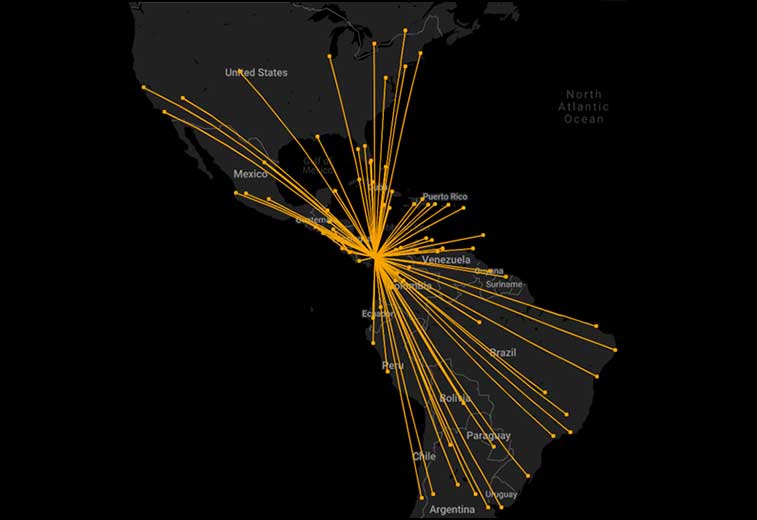 Benefiting from being open 24 hours, its sea-level position, and supportive government (fancy that!), Copa is increasingly exploiting is strong position through its hub of the Americas.

With a fleet of 89 operational aircraft – 68 Boeing 737-800s, 9 -700s and 12 E190s, together with grounded MAX-9s – each with a dedicated business class, Copa’s network is expansive: it serves 81 cities and 33 countries across the Americas. Paramaribo, Suriname, was the most recent to join its network.

Copa has eschewed wide-body aircraft and has instead remained steadfast in its use of low-capacity aircraft (average seating of around 145). And it has intentionally avoided service beyond the Americas, favouring code shares instead – both in and out of Star Alliance.  Sensibly, Copa has remained focused on its core.

Its use of B737s and E190s enables it to right-size capacity with demand.  Combined with typical connections of around 90 minutes, it generally offers multi-daily options to connect between its cities.  This is suggested through the airline’s very well-coordinated omnidirectional waves at its hub, with this figure showing its arrivals and departures in the week of 9th September 2019. 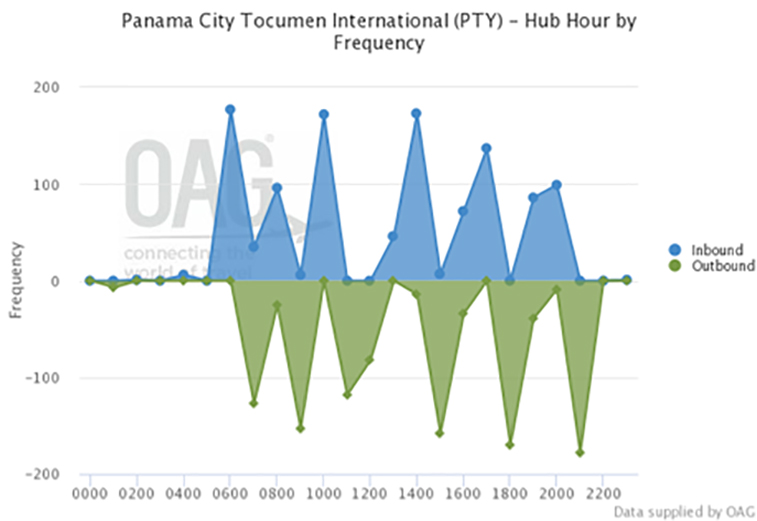 Inherent in all of this is typically high frequencies, with Copa’s around twice-daily on average.  San Jose, operated nine-daily, is its most-served for both P2P and connecting traffic: Costa Rica plays an important role in the airline’s number-one traffic flow.

Many of Copa’s cities have 6+ daily flights, including Bogota, Havana, Lima and Miami.  The consequences of Brazil’s economic problems are still being felt: even Rio is just daily and Sao Paulo has reduced from six- to four-daily. Clearly, cutting capacity should result in stronger load factors and hopefully higher yields, while reducing costs.

Copa’s high frequencies result from its narrow-bodies and regional jets, but also its relatively short average sector length (1,321 miles).  This – and its many overnight services – enables it to achieve reasonably high daily utilisation (12 hours).

The USA is Copa’s number-one international market, with almost 20% of its total seats.  This is reflected in the presence of the country in the airline’s top-10 country-pairs, as below. 13 US cities are presently served, most recently Denver, a hub of fellow Star Alliance member United. From Copa’s top-10 city-pairs, the popularity of Cancun among South Americans is clear. In 2018, a total of 1.7 million flew Cancun-South America, with Copa transporting about 600,000 of these.

The strength of Copa’s network is such that it is increasingly focusing on thinner routes, such as Mendoza in Argentina (around 6 1/2  hours’ flight time; four-weekly), Paramaribo (twice-weekly) and Barbados (twice-weekly).  This is partly the consequence of simple hub economics enabling the viability of thinner routes, and also from most major cities already being served.

As Copa develops further, it will be more reliant than ever on thinner destinations, as well as additional frequencies to existing cities.  One result of this is increasingly apparent. At key times with strong demand, it is more and more commonplace for two flights to the same city to leave within minutes of each other.  For example, Panama City-Santiago: a departure at both 1544 and 1549; Panama-Lima: 2127 and 2137; and Sao Paulo: 1506 and 1517. It is relatively low-risk and it does enable demand to be met, but it does raise some questions of economics.

How will Copa’s hub develop in the future?  Will it jeopardise its core going forward?  Or will it continue to remain firm to what has made it successful?  Vote now.