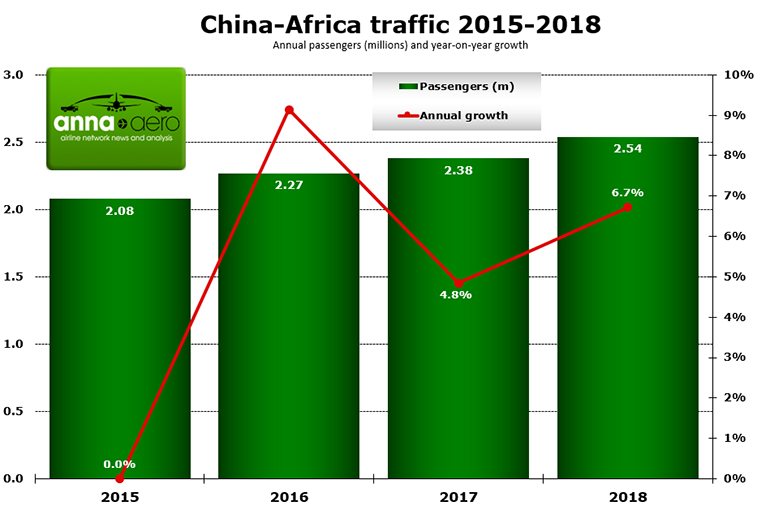 Sources of this demand include:

Six cities in China – Beijing, Changsha, Chengdu, Guangzhou, Shanghai and Shenzhen – have service to Africa.  However, the main gateway are Guangzhou (867,000 P2P passengers), Beijing (741,000) and Shanghai (569,000).  Together, these three accounted for almost 9 in 10 of all China-Africa passengers.

Guangzhou is known as the ‘Africa capital’ of China and as such it has more non-stop routes to the continent than any other Chinese airport.  The most exotic of these is Air Madagascar’s service from Antananarivo via Reunion, a weekly rotation that almost goes back to the bygone era in aviation

* The B787-8 operates Ethiopian’s relatively new additional three-weekly services. These connect to the airline’s small but growing third wave at Addis Ababa, hence its smallest wide-body for now.

In January 2020, Royal Air Maroc will begin a thrice-weekly service from Casablanca to Beijing/Daxing service, the city’s brand-new airport.  Interestingly, the timings of this route will result in relatively few two-way connections, so it will be disproportionately reliant on P2P demand.  And while Morocco’s P2P demand is growing, especially from Chinese tourism, it’s not enormous, with 108,000 in 2018.

Also in January, South African Airways will begin Guangzhou-Johannesburg having ended Hong Kong.  This is an intriguing move given yield and passenger demand on Johannesburg-Guangzhou are half as much as to nearby Hong Kong, albeit without a direct competitor. And, at the same time, it is a very long sector, with a block time of over 13 hours.

Presently, there are only 14 non-change routes between China and Africa. This is primarily because most city-pairs are thin and yields are typically not strong, both compounded by long distances. So the role of strong hubs. Indeed, in 2018, 8 in 10 passengers – over 2 million – connected somewhere between Africa and China.

It is here that Ethiopian Airlines comes into its own from both the enormous power of its Addis Ababa hub and its growing capacity and routes to the Asian powerhouse. Last year, Ethiopian carried 589,000 – or 29% – of all connecting passengers between Africa and China.  By comparison, fellow hub airline, Kenya Airways, transported fewer than 63,000.  This emphasises not only Kenya Airways’ ongoing challenges, but also its different geographic focus and position. Recently, Ethiopian stated that it wishes to increase frequencies to China to 50 per week by year-end 2020.  This, it says, would allow it to offer a double-daily service to Beijing, among others increases.

Egypt is the leading African country from China, with 370,000 P2P passengers. Chinese tourism is the key driver of this demand, which grows strongly YOY. The importance of Egypt is clearly highlighted in the table of top-10 routes. South Africa (259,000 P2P) and Nigeria (201,000) are the second and third largest countries.

Guangzhou is responsible for two-thirds of Nigeria’s demand. Due in part to the distance between Nigeria and China – over 7,000 miles – and multiple major hubs en route, there are no non-stop or direct services between the two.  However, Nigeria’s Air Peace is reportedly interested in beginning Lagos-Guangzhou, among a myriad of other long-haul routes, but there are very significant questions over the wisdom of this.

The China-Africa dragon has awoken.  And given increasing trade between the two and 31 million additional Chinese tourists worldwide in 2018 versus 2017, it won’t be too long until 3 million passengers is reached.  In three years’ time, what new routes will operate?