Like rugby, only less competitive: how the key Australia-New Zealand market has changed

With World Routes 2019 nearly upon us, anna.aero will soon be busy producing its glamorous Show Dailies. This year’s event will run from the 21st to the 24th September in Adelaide, South Australia. As the packing is done, it’s an opportune moment to look at the development and details of the crucial trans-Tasman market from Australia to New Zealand.  They might have different accents and love to be rivals, but they’re very closely connected in more ways than one.

Growing, but undermined by changes 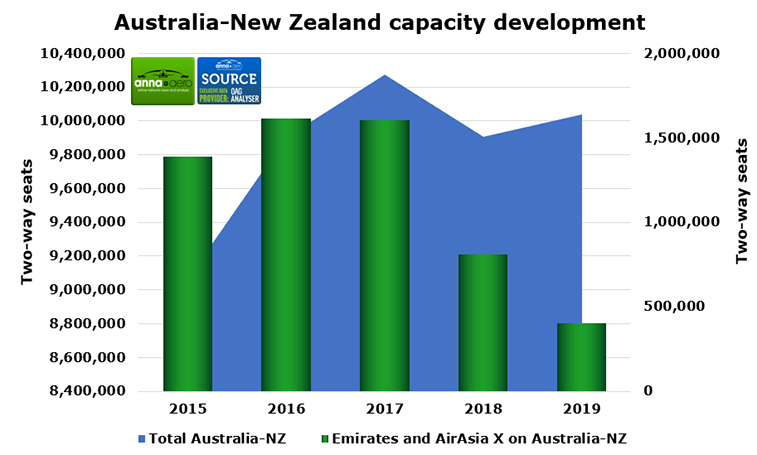 The past few years have been turbulent from both Emirates and AirAsia X ending their 5th freedom services across the sea.   Emirates cut over one million seats and AirAsia X almost 300,000.  Now, just Emirates’ daily Dubai-Sydney-Christchurch remains, operated by the A380. Since 2014, Qantas has focused the most on the country-pair, adding 50% more seats by 2019.

In 2018, New Zealand is by far the leading operator by offered seats, benefiting not just from strong P2P demand but crucially also easy onward connections, especially to North and South America.  (In 2018, Sydney-Auckland-Buenos Aires was its top connecting route.) 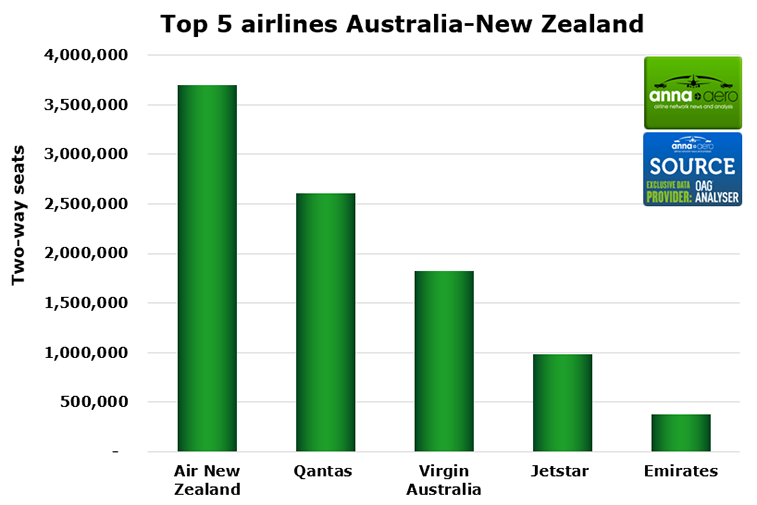 Air New Zealand’s leading position by seats is partly from its use of wide-bodies, which provide 48% of its trans-Tasman seats against 30% with Qantas.  Air New Zealand’s B777-300ERs and B787-9s tend to arrive into Auckland in the early morning from the Americas/Far East, and they’re then flown during the day to and from Australia, before their long-haul overnight services. Air New Zealand’s use of them is therefore partly for asset utilisation and demand.  The gap between Air New Zealand and Qantas closes significantly if based on frequency.

Unsurprisingly, over seven in ten seats are controlled by just two groups: Air New Zealand and Qantas (Qantas and Jetstar).  Yet Jetstar has barely grown in this market, while its parent – with higher costs and a greater need for higher yields – has, which partially shows the nature of the gap that materialised. Jetstar primarily operates thinner, leisure-focused routes deemed less suitable for Qantas, but also on some core routes, such as Sydney and Melbourne to Auckland, especially at off-peak times.  This includes an overnight service from Melbourne.

Average fares on Sydney-Auckland, the thickest route between the countries, demonstrates this well, with the premium achieved by Qantas explaining its preference for frequency.  (Fares are one-way, in USD, for local passengers only, and exclude taxes, any fuel surcharge and ancillaries, and are averaged across all cabins.)

In IATA’s W19 – so summertime in Australia and NZ – 23 routes will operate across the sea involving eight Australian airports and five in NZ. (Until 2018, Singapore Airlines operated Singapore-Canberra-Wellington.) Brisbane, the capital of Queensland, a tourism-driven state, has the most routes. In the map, below, it is hidden in-between the Gold Coast and Sunshine Coast. The prevalence of the Gold Coast is because of the popularity of the place with New Zealanders for sun and fun. 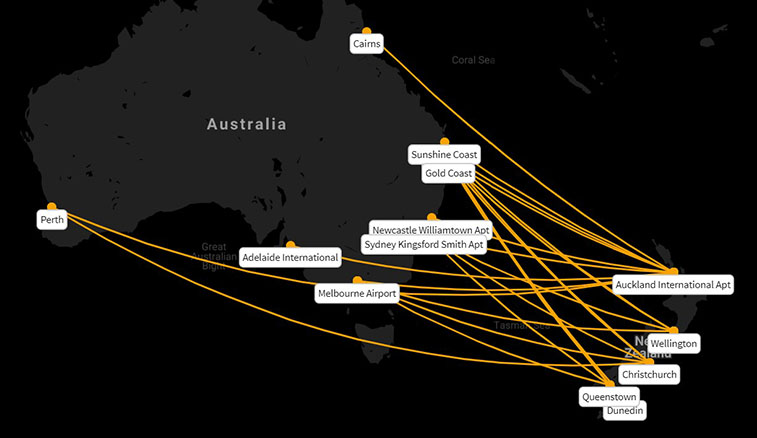 World Routes 2019’s host city, Adelaide, has just one route: a four-weekly Air New Zealand service to Auckland. It is operated by a wide-body, normally a B787-9, and it is timed to maximise connections in NZ’s largest city. The lack of services from Adelaide includes from being close to Melbourne, with a myriad of onward connections to NZ, and the relatively long distances.  But as the table below shows, Adelaide is underserved from NZ, with the largest unserved city-pair between the countries being Adelaide-Christchurch.

Australia-NZ has grown, but it has been hampered by the reduction following the exit of Emirates and AirAsia X. It is therefore less competitive than ever. Where, then, is the incentive to operate brand-new non-stops versus channelling through existing hubs?