To new lands: the development of Frontier Airlines

Frontier Airlines has had a turbulent past.  As a full-service hub airline, it suffered from poor financial performance that resulted in bankruptcy protection.  Following its 2013 acquisition by Indigo Partners, the airline’s strategic about-face – turning it into an ultra-low-cost-carrier – began. 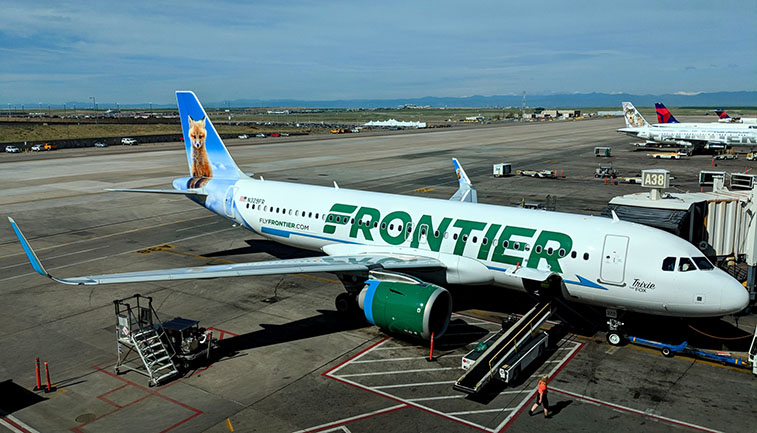 2015 was a pivotal year in its ULCC transformation from which its new strategy and cost mindset became clear. This involved fast growth mainly away from its Denver hub; higher-capacity aircraft; leisure locations; greater seasonality (yield-LF balance); and a big focus on overpriced, underserved and, in particular, unserved routes.  Its aim: lower costs; higher LFs; higher productivity; more ancillaries from greater traffic volume; and better performance. Between 2015 and 2019, Frontier almost doubled in size by carrying 12.7 million additional passengers, for a CAGR of 13%. 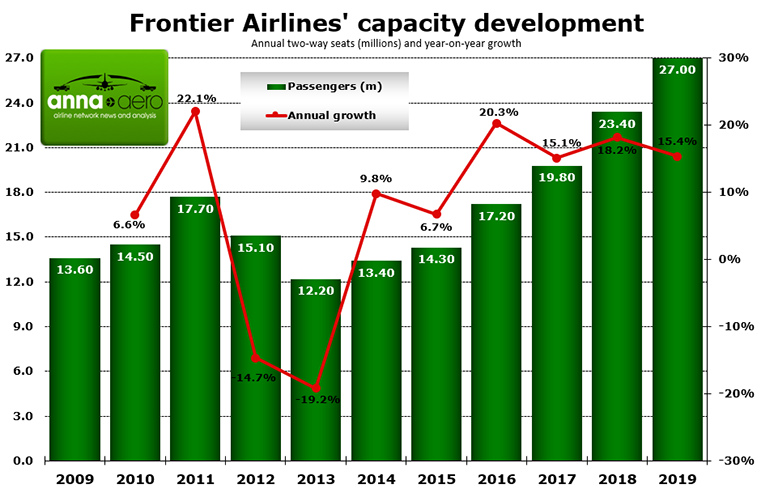 Last month, Frontier announced a major foray into NYC, with 15 new routes from Newark.  This followed Southwest’s announced pulldown at Newark in favour of La Guardia, and it allows Frontier to enhance its small NYC position.  This highlights the airline’s approach to new routes: an assorted collection – across major, mid-sized and smaller cities throughout the country – but ordinarily with a very strong VFR/holiday focus. 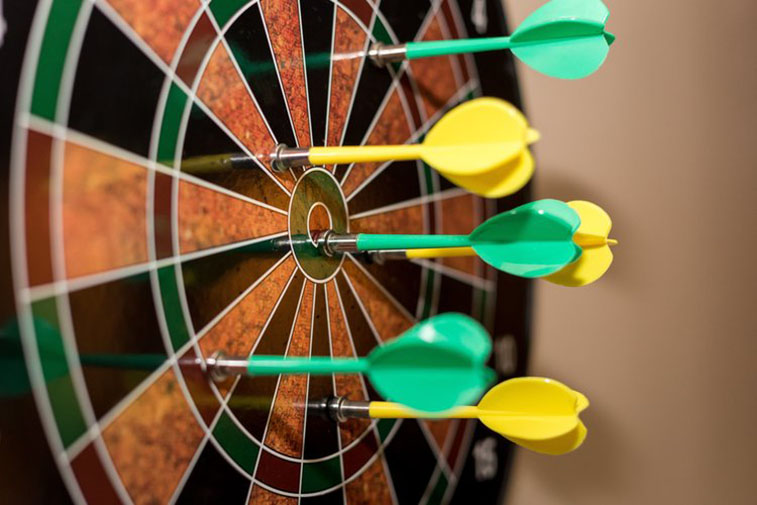 Its ‘here, there and everywhere’ approach makes it difficult for competitors to predict its new routes, which is how it should be.  However, it leads to people talking of a ‘dartboard approach’, aided by its intolerance to inadequate performance – but this is crucial for a primarily P2P-focused LCC/ULCC.

In spring 2018, Frontier announced that nine further routes would start from San Antonio, including Albuquerque, Charlotte and Memphis, all two-to-four-weekly.  Less than a year later, all nine had been cut. The data seemed compelling across all nine.  The Consumer Airfare Report shows that, in 2017, San Antonio-Omaha had 35,000 passengers flying indirectly with a high average fare of almost $250 – for a 824-mile flight – and no airline ‘owning’ the market with a strong share, as normally befits a sole non-stop operator.  Inherent in the LCC/ULCC model is risk-taking: some things work, some don’t. Solid business cases are important, together with flexibility: trying, monitoring, adapting as necessary, and, if needed, moving on.

The difficulty in knowing which routes may start is aided by Frontier’s low weekly frequencies: three-weekly on average in 2019, almost halved since 2015.  This means many hundreds of routes may be viable, with recent thin routes including Philadelphia-Pensacola and Raleigh/Durham-Syracuse.  Even major markets, such as Miami-Boston or Las Vegas-Seattle, see low frequencies, both four-weekly, focused as the airline is on the ‘soft underbelly’ of demand. 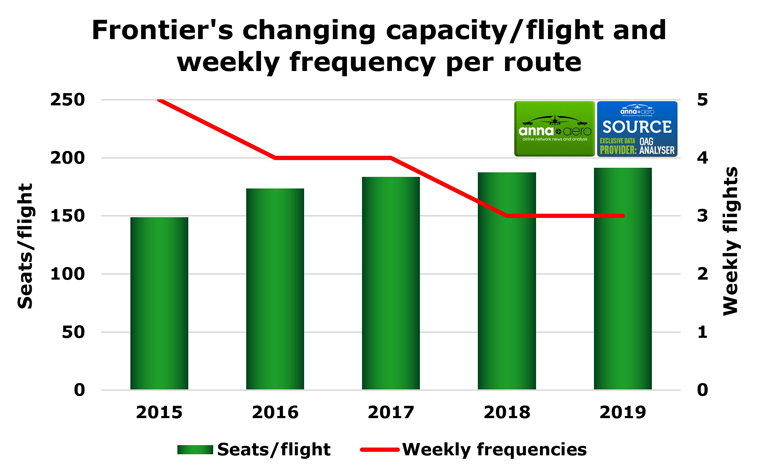 A key element of Frontier’s low frequencies is strongly increased capacity per flight, from an average of 149 seats in 2015 to 192 in 2019. Combined with longer average stage lengths, this should enable both lower CASM from splitting (albeit higher) expenses over more output and so lower, stimulatory fares, but crucially also more volume from which to generate ancillaries.

The importance of Frontier’s Denver hub remains, and it is still its number-one served airport partly from the city’s strong presence in its top-ten routes.  Denver is fundamental to Frontier’s online connections, a common feature among most US LCCs/ULCCs.

But the relative significance of Denver has reduced.  In 2014, it represented 80% of the airline’s total seats; by 2019, following its 2015 transformation, it was down to 36%.  However, Frontier has been growing strongly at Denver since 2018,  which contributed to the Colorado city being the airline’s number-two airport for added since between 2015-2019. Clearly, though, the overwhelming focus has instead been on P2P routes throughout the country, including to/from smaller cities. 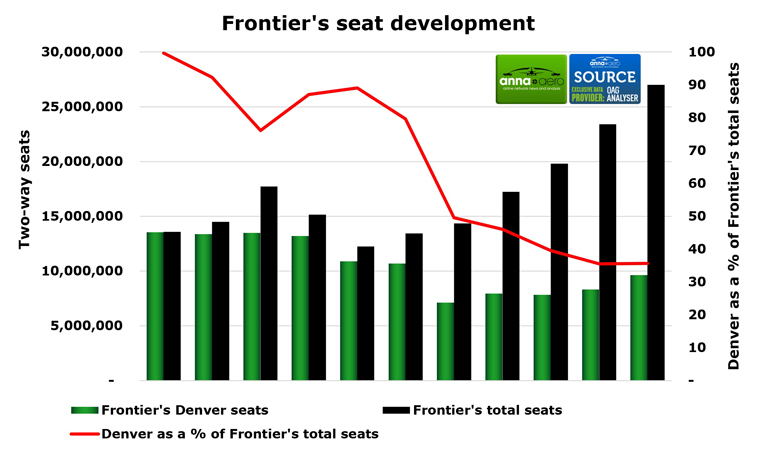 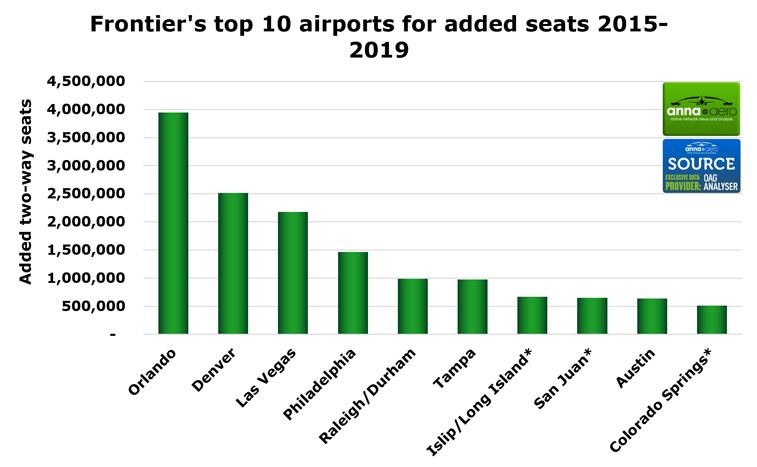 *Unserved in 2015, but included as they were nonetheless in the top-10.

The above illustrates Frontier’s significant shift in focus to the most obvious of US leisure demand – Florida and Las Vegas – as a result of their ability to be the most strongly stimulated. Indeed, between 2015 and 2019, Frontier’s seats to/from Florida (it now serves seven airports there) and Nevada increased by 8.5 million – over two-thirds of the 12.6m added in all. This is further emphasised by many other places, such as Islip and its coming Newark routes, being dependent on service to the Sunshine State. By 2019, Florida and Nevada represented virtually dead-on 50% of the airline’s total capacity, up from just over 30% in 2015. The strong presence of Frontier in the eastern half of the US, and Florida in particular, is clear from its 2019 route map. 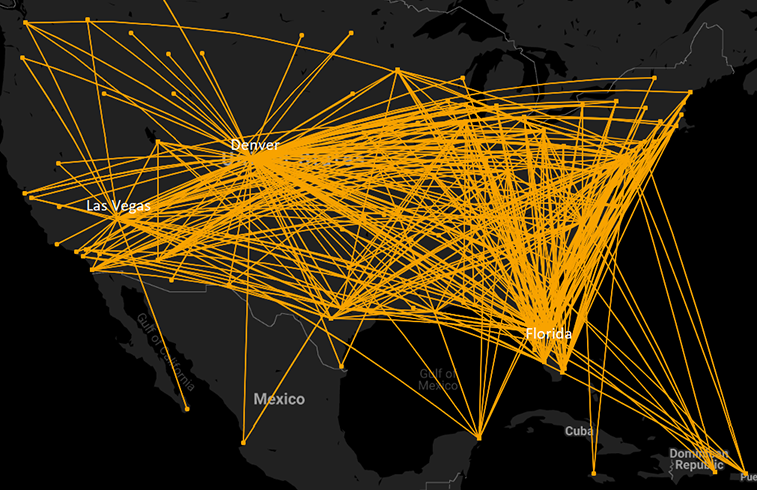 Frontier has come a long way since 2015. With 170 aircraft on order, including for replacement, many hundreds of low frequency routes are possible across the country and internationally to the Caribbean and Central America.  And with its 18 A321XLRs on order, longer-haul routes will be possible too, so long as they make sense economically.  Perhaps Frontier will venture into South America, which is less explored and competitive than to Europe.  Whatever happens, it’ll be exciting to watch.