Yesterday, 30th September, American Airlines announced it’ll restart a daily Boston-London/Heathrow service from the 29th March.  It last operated this in 2013.  This announcement is noteworthy when it is remembered that Delta will start Boston-London/Gatwick – and thereby return to Gatwick – from the 22nd May.

London-Boston has grown strongly over the past few years, primarily from Norwegian (2016 entry) and Primera Air (2018).  The impact of their new entry on non-stop P2P fares – and non-stop P2P traffic volume – is clear, as below. London-Boston has proven to be reasonably price-elastic, but with some questions of competitiveness and sustainability. 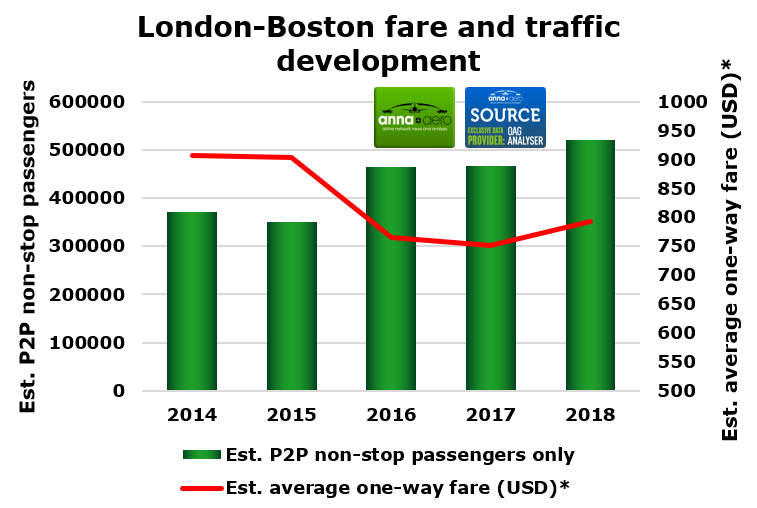 Source: OAG Traffic Analyser. * One-way; USD; excluding taxes, fuel surcharges and any ancillaries; and across all cabins. Note: fares here are only for non-stop P2P passengers.

In S20, there will be ten daily flights between London and Boston, up from eight in S19:

Or have both AA and Delta announced Boston-London because JetBlue has adamantly stated it will start the city-pair – along with NYC/JFK-London – from 2021?  This makes sense give Delta is returning to Gatwick. JetBlue will, of course, benefit from not just P2P demand – including lower-priced business class in what is increasingly rumoured to be a fairly light-density A321LR – but also strong onward connectivity beyond Boston.

The reality, of course, is a combination of reasons.

It will be good to see the next move and also the specifics – launch date, frequency, timings, London airport(s), aircraft density – of JetBlue’s service, and the impacts of this.