Speaking at World Routes 2019, Albrecht said that “Shrink and clean is the normal approach to airline turnarounds.  But not at Saudia. It was grow, grow, grow.” And Saudia has certainly grown. Since 2015, it has added almost 11 million seats, for a CAGR of 5%, with a stronger emphasis on international (+6 million) than domestic (+4.5 million). The flat performance is 2019 is notable and discussed below. 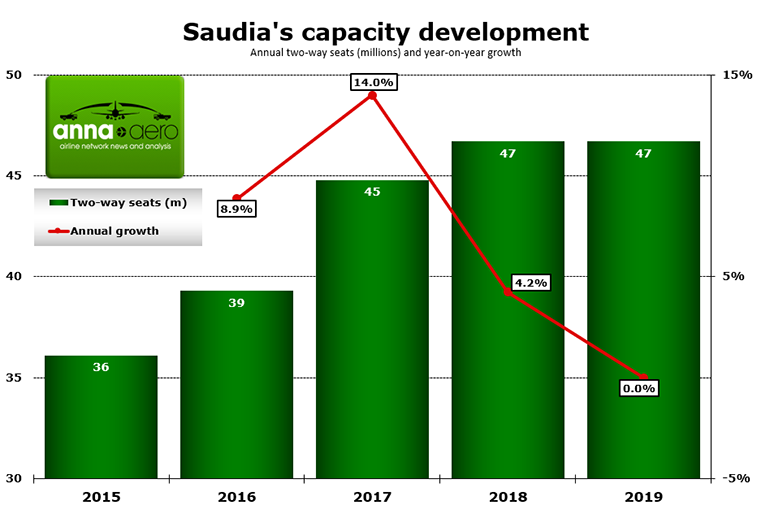 No capacity growth in 2019 – and the slowdown in capacity in the preceding year – is because of Saudia’s domestic operations.  In 2017, Saudia’s LCC subsidiary, flyadeal, began. Excluding flyadeal, Saudia’s domestic capacity virtually didn’t grow 2017-2019. Including it, it grew by over 5 million. flyadeal now has 11 A320s and operates exclusively domestically. 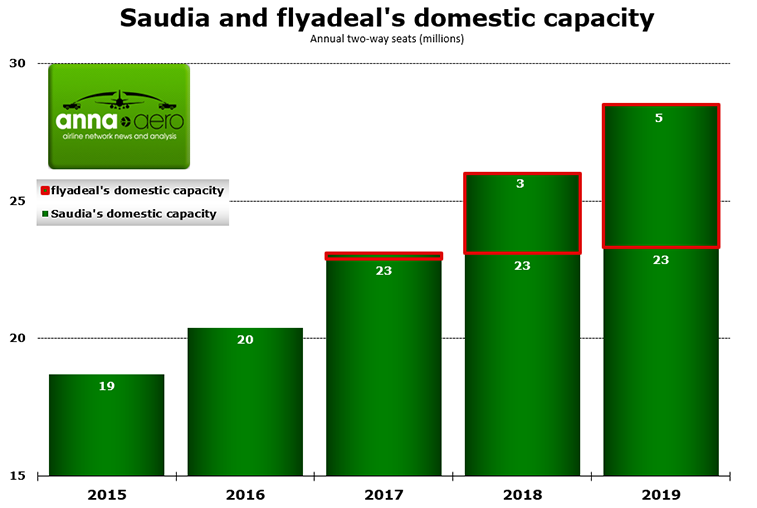 It isn’t just Saudia that has awoken.  The country has.  Saudia has grown in line with the government’s Vision 2030. Albrecht said that this vision is “all about positioning Saudi Arabia as a new, different country.”  This is to move away from its dependence on oil while growing the country, including through tourism – especially pilgrimages.  The country is even to offer e-visas. For the first time, the country is attempting to be more open than it ever has been.

Saudia revolves around VFR and pilgrimage markets, with its top-ten international routes emphasising this focus.

In 2018, almost three million people connected with Saudia at Jeddah.  But unlike nearby competitors, Saudia hasn’t been able to operate a proper hub-and-spoke system.  Albrecht said that this was partly from the condition of Jeddah’s terminal and also its distinct lack of contact stands. These factors resulted in uncompetitive quality, no real coordination between its arrivals and departures and no explicit focus on connectivity. This is something that Saudia is working on remedying, aided by Jeddah’s new Terminal 1 that opened on the 24th September with an initial capacity for 30mppa and 45 contact stands.

Local demand is always going to be crucial for Saudia and Albrecht was clear that it will not be a big hub player.  P2P demand includes from the development of very obvious markets, such as Hajj and Umrah.  Previously, Saudia had little incentive to chase opportunities from its strong government protection.“We only had a 24% share of the Hajj and Umrah markets, both crucial for Saudi Arabia.  Why didn’t we have 50%?  But it didn’t matter: we were subsidised.”  But Saudia no longer has fuel subsidies. And since Albrecht started, Saudia’s penetration of Hajj and Umrah markets has grown to 38%.

Albrecht insists that Saudia is almost at breakeven, although he somewhat dodged the question of financial performance versus growth for the country. With 75 aircraft on order, including a strong focus on A321LR/XLRs, how will Saudia develop?  And what will be the role of Riyadh, a city it serves almost as much as Jeddah?