China is the number-one country to Thailand, with Chinese tourists increasing from one million in 2010 to nearly 11 million in 2018.  For the first time, in 2015 China provided more tourists to Thailand than all ASEAN countries combined.

This popularity is indicated by China-Bangkok. In the eight years to 2018, two-way seats between the two increased by 14 million – to over 17 million. The period between 2014 and 2018 was especially important, with seats up by 10 million (!).  Despite the proliferation of Thai LCCs, most of the very strong growth between 2014-2015 was from Chinese and not Thai operators, especially China Southern (+600,000 seats). The balance changed later. 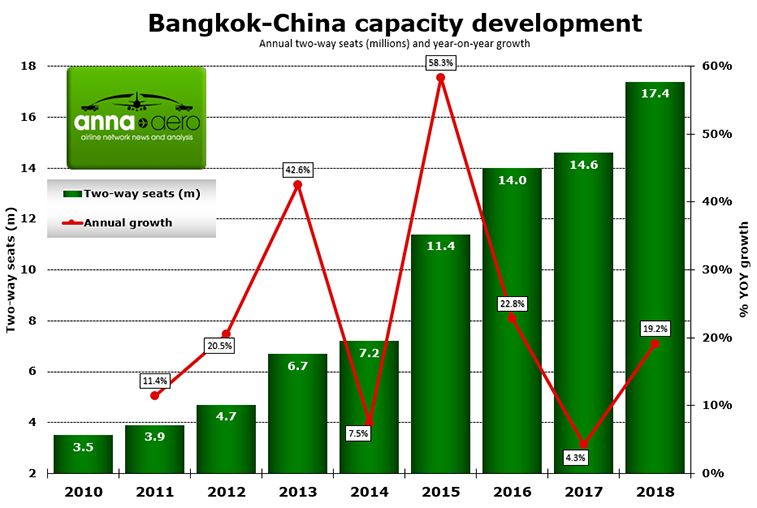 Presently, 69 routes operate between China and Bangkok on an airport-level basis.  In all, there are about 245 daily flights between the two (both ways combined). 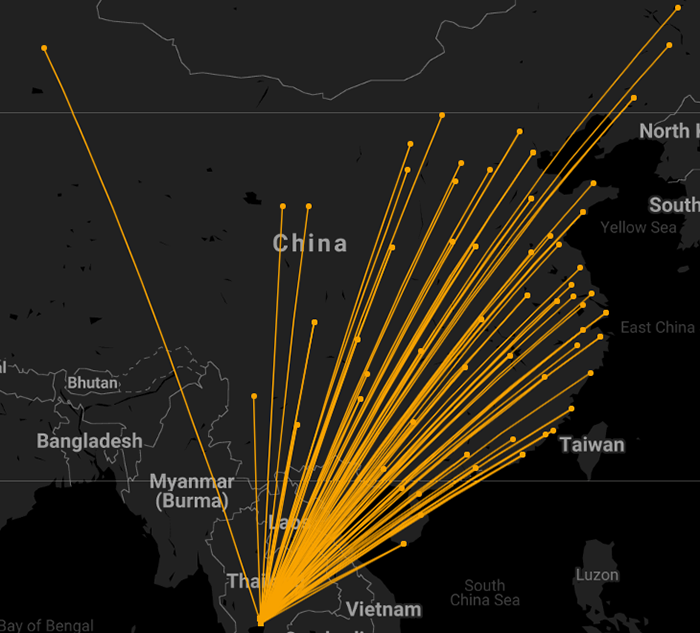 These 69 routes involve an impressive 42 Chinese airports, with the table, below, highlighting the top-ten routes at both airport- and city-pair level.  Bangkok Suvarnabhumi (BKK) sees service from 39 of these against 24 at Bangkok Don Mueang (DMK).  Beyond the obvious Chinese metropolises, it is especially exciting how many smaller cities – for example, Hohot, Nantong, Ordos – are connected to Bangkok.

At a city-pair level, Bangkok-Guangzhou has about 30 daily flights (both ways combined) – across nine operators. Partly from congestion, there’s normally about 26 departures between China and Bangkok from 2300 and 0300.  Depending on the day, there’s up to four flights from Guangzhou, including Spring Airlines’ 0215 service that arrives at 0415 (three-hour block time with one hour time difference).

28 airlines operate between China and Bangkok, with the top-ten below.  It’s noteworthy that they are now led by Thai operators, with a strong emphasis on hybrids/LCCs.

Two of these 28 airlines – NokScoot and Thai AirAsia X – stand out for their high average capacities per flight, at 415 and 376 seats respectively. The use of wide-bodies in Asia, including on fairly short flights, is commonplace. But NokScoot and Thai AirAsia X’s figures, from their use of B777-200s and A330-300s respectively, are significantly more than the average 196 seats across all 28 airlines. It is from their use that four of the 69 routes have by far the highest capacities: Don Mueang to Qingdao (415 seats), Shenyang (409), Tianjin (396) and Shanghai Pudong. By contrast, China Express Airlines uses CRJ-900s with 86 seats per flight and operates only one route to Bangkok: from Zhanjiang.