Tampa-ing with the FL competition

Tampa International has seen impressive recent growth, with some 22 new routes added in S19 compared with S18, operated by nine carriers. These include a new offering to London Gatwick route by Norwegian, and a seasonal connection to Amsterdam from Delta, strengthening onward connectivity on SkyTeam carriers alongside its up to 13 daily frequencies to Atlanta. LCCs have also been a major focus for the airport in recent years, with Spirit and Frontier launching three routes apiece in W19 and the former up 800,000 seats since 2015, with the latter up 500,000.

Europe, South America and Canada are three large underserved markets for Tampa. Despite the rivalry from nearby Orlando, Tampa continues to experience strong growth internationally, with BA increasing Gatwick capacity and Norwegian entering the market in S19, leading to a total of 33% higher capacity on the route compared with S18.

Looking at Tampa’s top 10 unserved routes, there is still plenty of untapped potential domestically, with high connecting traffic via hubs including Atlanta, which accounts for 21% of Tampa’s annual connecting traffic. Frontier’s rationale behind launching Atlanta flights is likely different – at just three-weekly, Frontier is clearly aiming at the absolute price-conscious customer, who may otherwise travel the 653 kilometres by coach. 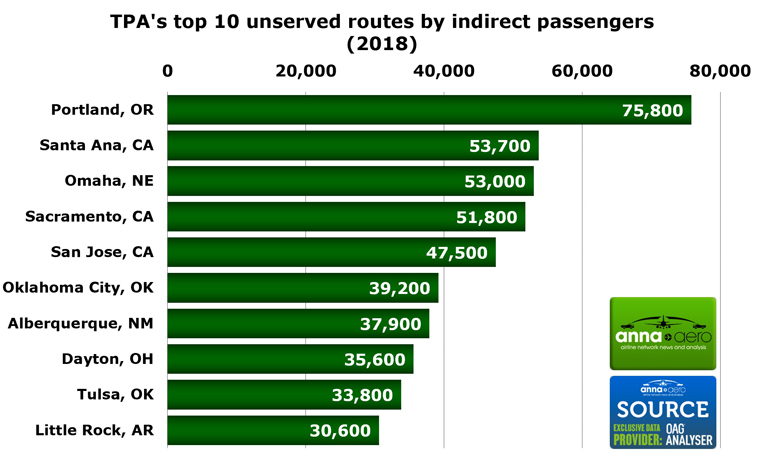 In total, four of the five top unserved routes from Tampa are on the west coast. Despite the prevalence of hubs in-between, the numbers and their growth suggests that some may be viable for a non-stop service, even if seasonally. For example, Portland could sustain a daily flight, and offer connectivity further west to Hawaii, or within the tri-state area of Oregon, Washington and California.

Latin America is noticeably underserved from Tampa, with 841,000 total passengers and nearly six in ten – 487,000 – flying indirectly.  This doesn’t take account of leakage to Orlando.  South America has no non-stop service; Central America sees 198,000 passengers and almost all indirect; and 200,000 connect via somewhere else to reach the Caribbean. Opportunities abound.

Colombia also stands out.  Although Mexico is the Tampa’s largest unserved country in Latin America, 36,000 Colombians live within two miles of the airport.  Yet 70% travel to Orlando or fly to Miami or Ft Lauderdale for onward service.

Tampa is fast growing and eagerly anticipating more service domestically and to Europe and Latin America.