A KUT above the rest? Wizz Air’s Kutaisi’s routes are based on indirect passengers from Tbilisi

In 2016, Wizz Air announced a new base at Kutaisi.  This was not to serve the city area itself: while Kutaisi is the second-largest city in the country, it is small.  Instead, it serves the whole country, with the capital, Tbilisi, 250km away by frequent buses.  That’s a long way, but Tbilisi had no real demand stimulation to Europe from LCCs for a very simple reason.

anna.aero’s spoke to Dea Matchavariani, Chief Business Development Officer, United Airports of Georgia, in advance of World Routes 2019.  Matchavariani said that about 80% of passengers flying to Kutaisi continue to Tbilisi.  This highlights the lengths people will go to for lower fares.

Kutaisi is the LCC airport for the entire country. This raises various questions. Kutaisi must be heavily incentivising airlines. Given this, and the very high percentage of leakage, what of Tbilisi?  If it decided to suitably encourage airlines, Kutaisi’s role would be significantly weaker given minimal local demand. Which is unlikely, given United Airports of Georgia owns all of the facilities in the country.  However, Ryanair recently announced both Kutaisi (Bologna and Marseille) and Tbilisi (Cologne and Milan Bergamo), suggesting that it might not be as clear-cut as first thought.

Come S20, Wizz Air will serve 41 destinations from Kutaisi. Wizz Air is by far the largest at the airport. 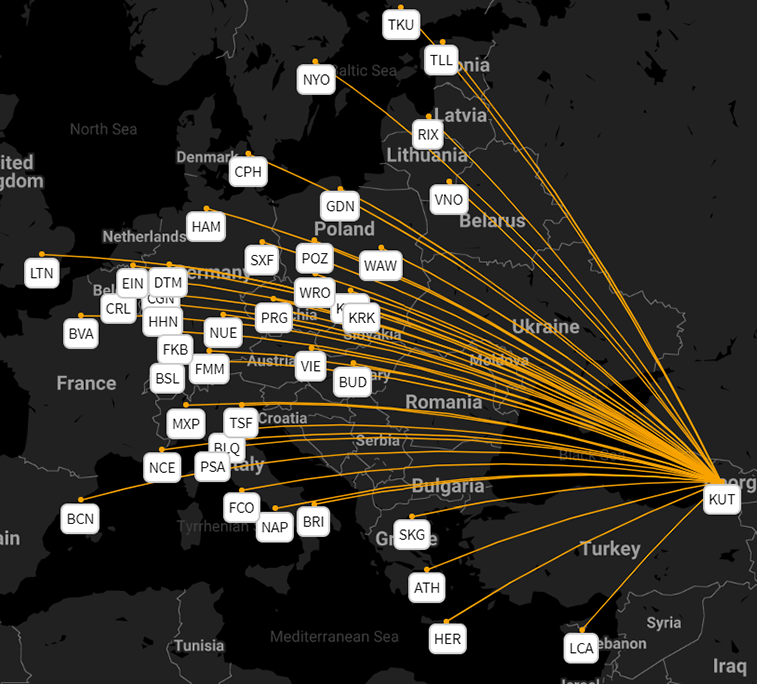 The fact that many destinations from Tbilisi haven’t been stimulated has offered many opportunities. Sensibly, Wizz Air has mainly chosen the most unserved or underserved routes (% of indirect passengers versus total) from Tbilisi, as in the table that follows.  Wizz Air serves six Polish cities from Kutaisi, but there is scant data, so most have been excluded here.

But Turkey is out for Wizz Air because of bilaterals and the need for a different AOC.  Perhaps Tbilisi, rather than Kutaisi, might attract the attention of Turkish (as with Ankara recently, which had 21,000), Pegasus or SunExpress.

Focusing more on Wizz Air, the most unserved city from Tbilisi is now Madrid, with 17,000 indirect before stimulation. As a city, Madrid is well served by Wizz Air, but at almost 2,400 miles the sector would be among the longest in its system.

Other unserved possibilities include:

All are potentially ripe for stimulating. But will they start?