This instalment of the ‘top-20 unserved’ looks at unserved routes from the Eastern USA – defined by the time zone – to the Caribbean. In the 12 months to August 2019, 25 million flew between them, up 600,000 over the prior year.

Of these 25 million, six million flew indirectly, equivalent to a PDEW of over 8,000 excluding seasonality.  At almost one-quarter indirect, this is very far from the highest proportion, but it’s nonetheless important.

Source: OAG Traffic Analyser. * One-way; USD; excluding taxes; excludes fuel surcharges; and across all cabins.+ As n/a, these won’t be chosen for any further analysis. ** And 36,000 to Toronto. # And 17,000 to nearby Syracuse.

The dominance of San Juan, Punta Cana and Nassau in the top-20 is borne out at country-level, below.  They’re well-served from the US, from a collection of purposes of travel, but opportunities remain. This is something that Allegiant, Frontier and Spirit have been exploring in recent years, even if just once- or twice-weekly and seasonally, such as Allegiant Air’s Pittsburgh-San Juan.  While Allegiant’s Caribbean presence is tiny, Spirit and Frontier have grown strongly since 2017: Spirit is up 1.3 million seats (CAGR 28%) and Frontier 600,000 (CAGR 33%). Both, of course, were from a low base.

This route looks interesting. While its estimated fare/mile across these 20 is average, it has below-average sector length (although it’s still quite long at almost 1,600 miles).  And although its YOY growth was only 1%, it has meaningfully grown in the five years to August 2019, shown below: 10,000 additional passengers were carried for a CAGR of 8%. A potential opportunity for Frontier? Presently, the ULCC serves Montego Bay from Philadelphia and Raleigh Durham. 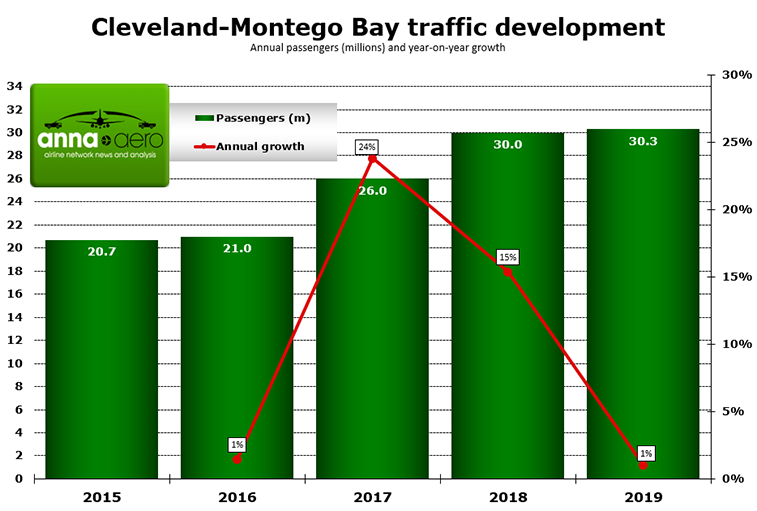