Part 1: Volotea grows strongly, with Italy and France responsible for 93% of its capacity

Volotea is a leisure-focused airline that seeks out unserved routes on a low-frequency basis, averaging 3.4 per week in 2019.

With 13 bases and 322 routes, Volotea had a net increase of 64 routes in 2019.  The airline has confirmed new airports and numerous new routes for S20, including Strasbourg – Barcelona, an unserved market with 2,100 indirect passengers. This will be the first time Barcelona, the location of Volotea’s headquarters, will be served. Volotea revolves around Italy, France, Spain and Greece, which is reflected in its top-ten airports and routes in 2019.

Italy is Volotea’s most-served country. Combined with France, routes to, from and within both countries account for 93% of its capacity in 2019. Both countries are responsible for almost nine in ten of its added seats.  While Italy and France have been declining as a % of its total capacity, as below, Spain and Greece have been increasing – but from significantly lower capacity bases.  In 2019, Spain and Greece have almost 1.5 million fewer seats than Italy alone.

Between 2015 and 2019, Volotea’s capacity involving Greece grew by 354% (CAGR: 35%).  This was from its Athens base, which began in 2018, and its slew of domestic Greek routes.  This highlights a growing threat: as Volotea grows, it inevitably faces more direct competition, often from significantly larger airlines.  And as individual routes solely operated by Volotea thicken, they may become more attractive to others.

Volotea has served Greece from Italy for many years, benefiting from close proximity and relatively short sectors and the ability to increase aircraft use.  In S19, it operated 45 routes between the two, with ten from Bari alone – including the 200-mile hop to Corfu.  Several of its Italy-Greece services operate very late at night, for example the 980-mile Verona – Santorini: 2230-0200+1; 0225-0355.  This helps with slot restrictions, which can be very problematic at Greek airports at peak times. 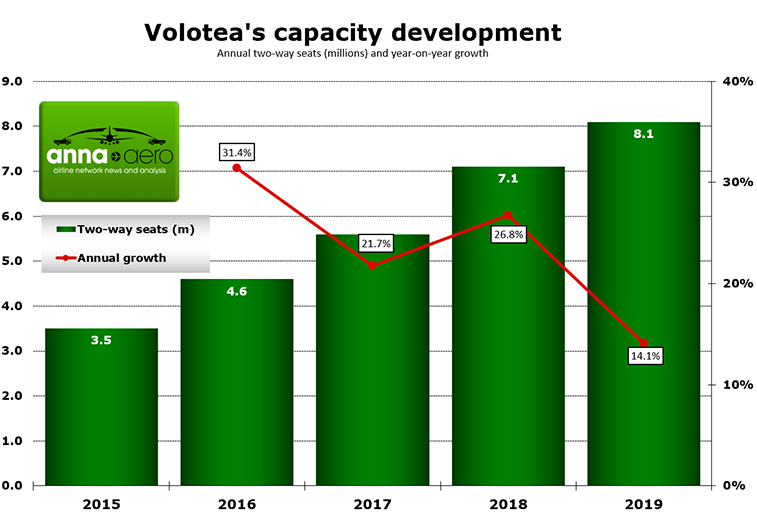 In its last full financial year, 2018, Volotea’s operating profit grew to €13.6 million.  This may not seem much, but with 36 aircraft it is still a relatively small European airline. Its operating result was from a 29% increase in total revenue but a 36% increase in passengers to 6.6 million, so total revenue per passenger declined YOY from €64 to €60 – while LF significantly increased from 85% to 93%.

Part two, next week, will explore Volotea’s growing direct competition, together with its changing seasonality and fleet composition.  Stay tuned.