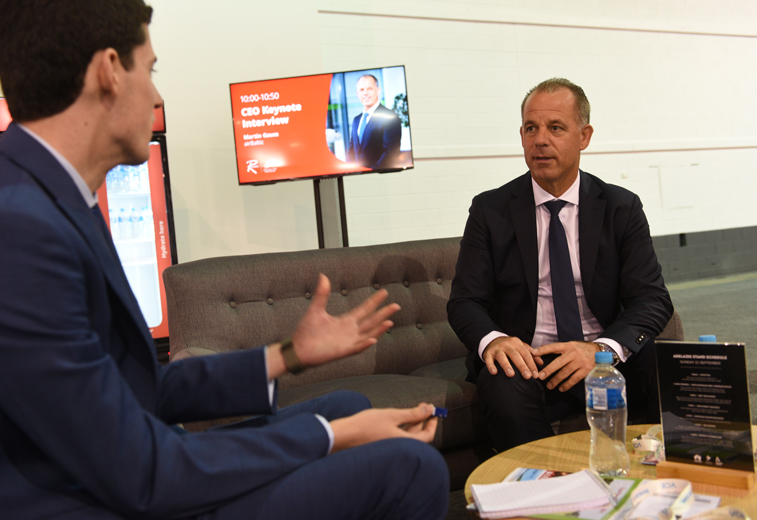 airBaltic’s top unserved destinations from existing bases are all from Vilnius, currently a smaller secondary base for the airline with plenty of untapped potential. These include Stockholm Arlanda, Helsinki Vantaa, and London Gatwick, each with between 15,000 and 21,000 indirect passengers in 2018 according to OAG Traffic Analyser. When applying a market stimulation factor, the routes could sustain at least four weekly flights.

“In 2019, we’re set to reach a milestone of five million passengers per year, and €500 million revenue. We’ve set out in our business plan intentions for a total fleet of 80 A220s, of which 50 will be stationed in the Baltics, primarily in Riga , for hub-and-spoke operations”. Gauss outlined that the other 30 A220s “could be based outside of the region…we have identified four potential bases for the 30 to go, all of which are in our current route network”.

As for the A220 itself, Gauss is full of praise: “The aircraft exceeded all our – and probably the manufacturer’s – expectations. It is lighter than similar competing aircraft, and with the wide-body-style aisle, large overhead lockers and 2-3 seat configuration can be turned around quicker. It has recently received a range upgrade making long and thin routes as far as Delhi and Addis Ababa theoretically possible from Riga”.

Potential Macroeconomic clouds on the horizon, but airBaltic in good position says Gauss

“We are feeling some effects of the strong dollar – and as we don’t operate US routes, we don’t receive income in dollars [to offset this]. Whilst we do hedge fuel, ultimately the price of oil is an industry-wide Macro factor outside of our control. But, the A220 has the lowest trip cost of any narrowbody aircraft, so we are better placed than rivals to deal with any future oil price rise. On the issue of global warming, our new aircraft produce 20% less CO2 than previous generation examples; such dramatic emissions improvements would be hard to find in other transport modes”.

airBaltic is all about social media; wants to see “one click” flight bookings

“Social media and strong internet distribution are key brand builders for the future”, Gauss observes. “airBaltic stands out from rivals on social media, as despite not being so large we have the highest Facebook engagement rate [reactions to a post ÷ number of readers] of any airline. We’ve seen bookings result from people viewing our social media, and I’d like to see in future “one-click” flight bookings, in the same way as people can order products with one click online”.