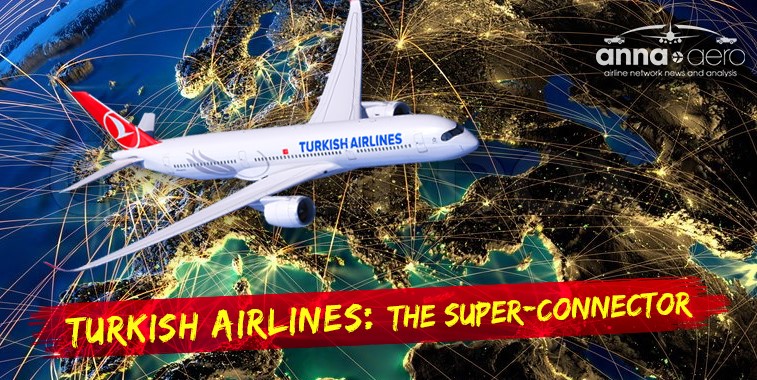 Turkish Airlines carries almost 34 million connecting passengers, with international – international connections accounting for nearly two-thirds of its total. Interestingly, it seems to receive less attention than the MEB3, despite arguably posing a greater risk, depending on the traffic flows in question.

Turkish Airlines’ strong network from Istanbul Airport has many benefits, including:

The strength of Turkish Airlines’ network from the new Istanbul Airport -– only international routes are shown in this map -– is clear. And yesterday, 15th October, it announced a new service: a three-weekly Istanbul – Vancouver service from S20. Source: OAG Mapper.

The table, below, shows that the USA features in seven of these top-20, generating 500,000 connecting passengers, while Germany features in six (439,000).  Germany is Turkish’s key international country with 11 destinations and about 37 daily flights from Istanbul Airport (each way).  However, when extended beyond the top-20 international – international markets, Germany increases to 1.5 million (USA: 1.1 million).  When Germany – Turkey connections are included, it increases to 2.3 million (USA: 1.4 million). This is partly the result of high numbers of Turkish diaspora in Germany and also the popularity of Turkey as a holiday location for Germans.

There are some country-pairs that might not have been expected to be so important, such as Bangladesh – Italy.  This is from over 140,000 Bangladeshis in Italy, making them one of Italy’s largest immigrant populations.  The relative lack of India versus the MEB3 is apparent, which is partly from Turkish’s small presence there – it only serves Delhi and Mumbai with passenger services – as it is heavily restricted by bilaterals.

Interestingly, Germany is almost absent from its top-20 airport-pairs. Tel Aviv features five times, especially from the USA.  Turkish serves Tel Aviv nine-daily from Istanbul Airport, with three of these often by wide-bodies.  Tel Aviv is Turkish’s most-served international airport.  Islamabad – Jeddah stands out as it is almost twice as far as the non-stop distance despite up to four-daily non-stops – including by B747-400s and B777s – and a myriad of easy one-stops over the Gulf.