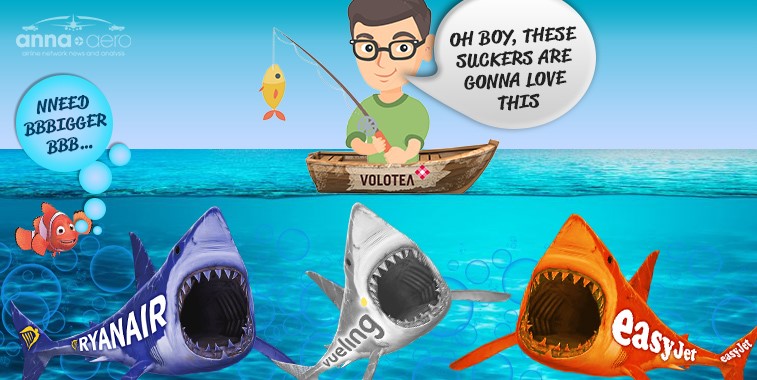 This week, we look at Volotea’s seasonality change, aircraft evolution – and direct competition with these ‘sharks’.

Last week, we looked at the development and key markets of Volotea. This week, we look at its changing seasonality, aircraft and direct competition.

Reducing seasonality, but still much more than key competitors

Volotea is a highly seasonal airline. It focuses on when people want to travel. This is partly the result of its leisure-focused routes and its large emphasis on Southern Europe.  In 2019, the seat capacity difference between Volotea’s peak month (August) and its lowermost (February) is 4.7. This is considerable. And it is also substantial when compared with key competitors Vueling (1.8), Ryanair (1.7) and easyJet (1.5). Yet Volotea has gradually become less seasonal, with its peak-to-trough month difference down from a high of 8.3 in 2014. This is almost inevitable as it grows. 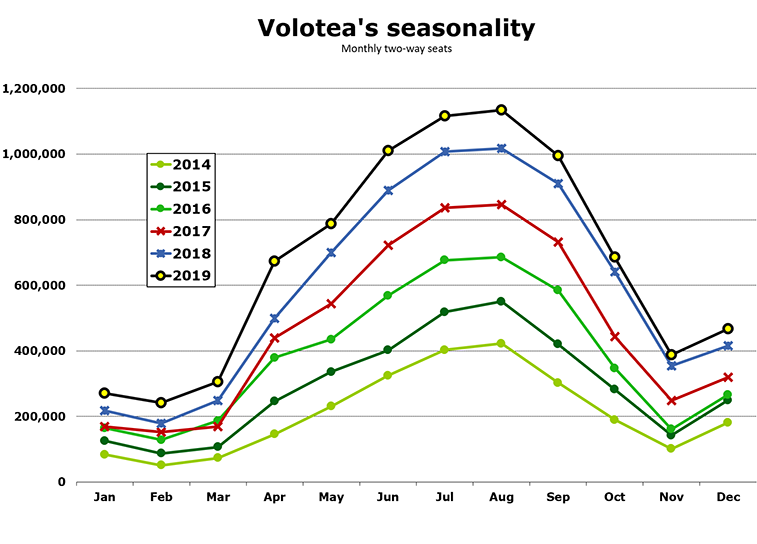 Volotea’s significant seasonality is made possible by its comparatively inexpensive aircraft. This is partly from their age, at an average of almost 16 years. It trades higher variable costs (e.g. fuel) for lower fixed costs (purchase/lease). In 2015, it had an all-B717 fleet with 125 seats. It started to add A319s – with 156 seats – for both higher capacity and longer range. 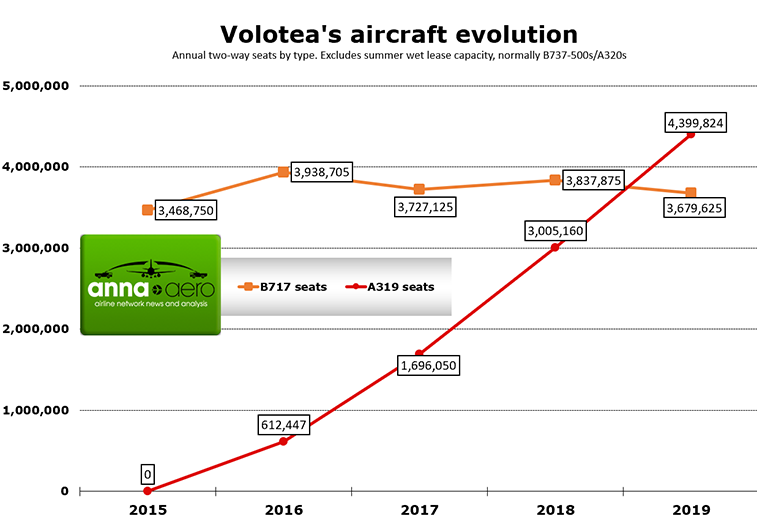 By 2019, its B717s comprised 46% of its fleet and its A319s 54%. Volotea expects only A319s in its fleet for the simplification and economic benefits these will bring. In Q1 2016, it said its B717s will be gone in the next two-to-three years.  Nearly four years later, they still accounted for 3.7 million seats, down only 7% on 2016.  Its A319s have played a crucial role in growing its seats per sector from 125 in 2015 to 140 in 2019, lowering unit costs, growing ancillary opportunities from greater passenger volume and not having too many seats to fill for its thin markets.

Volotea’s direct competition with easyJet, Ryanair and Vueling up to 41% of its seats

As Volotea grows, it inevitably faces more direct competition. This is from both remaining unserved or underserved routes that might be within the sights of others, and from its served routes growing and appealing to larger airlines.

Let’s look at Volotea’s competition with easyJet, Ryanair and Vueling, its three main competitors. In 2015, 530,000 of Volotea’s seats – 15% of its total – had direct competition with these across 23 routes.  Come 2019, this had grown to 3.3 million and 41% across 97 routes. Since 2017, the number of routes with direct competition has increased from 52 to 97. Vueling used to be the number-one competitor, but since 2018 easyJet took over.  Now, easyJet has 51 routes that compete directly with Volotea. Three-quarters of these are from easyJet’s growing focus on France. 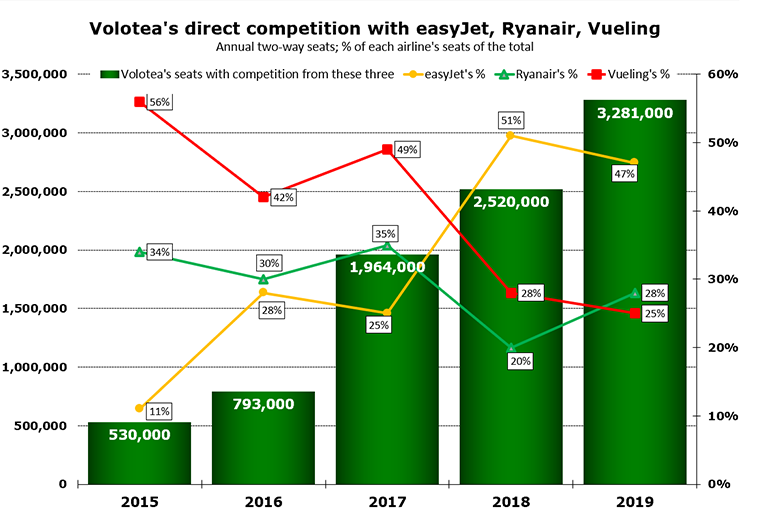 View Part one: Volotea grows strongly, with Italy and France responsible for 93% of its capacity