The UK ends ban to Sharm El Sheikh; it had 1.2 million passengers

The UK has ended its ban to Sharm El Sheikh, Egypt, after almost exactly four years.  It was introduced in November 2015 after Metrojet flight 9268 exploded after departure.  There were suspicions from the British government of the ineffectiveness of the airport’s security, but flights continued from other European nations. 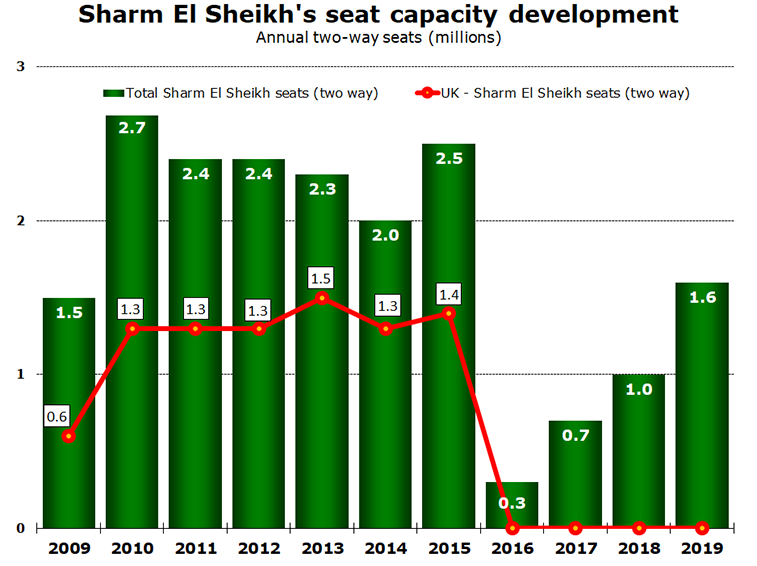 In 2015, 15 UK airports had non-stop service to the Egyptian resort, unsurprisingly led by London Gatwick, Manchester and London Luton.  1.18 million passengers were transported – remembering that nearly two months were cut in what is a reasonably flat year-round market – and an overall LF of ~84%.

TUI was the leading airline, followed by Monarch (scheduled), easyJet, Thomas Cook and British Airways.  (Between 2009 and 2011, BA even operated B777-200s from Gatwick.)  This mixture of airlines resulted in a reasonably balanced market: 44% scheduled and 56% charter.

Rea Sea Holidays was the first to announce the return of package holidays to Sharm El Sheikh.  It’ll use Enter Air on a weekly service from London Gatwick from this December.  As yet, TUI, Jet2, easyJet and BA have said little about Sharm El Sheikh. It’ll be interesting to see which announce it first.