Africa has 1,140 international flights within the continent daily; Ethiopian is #1 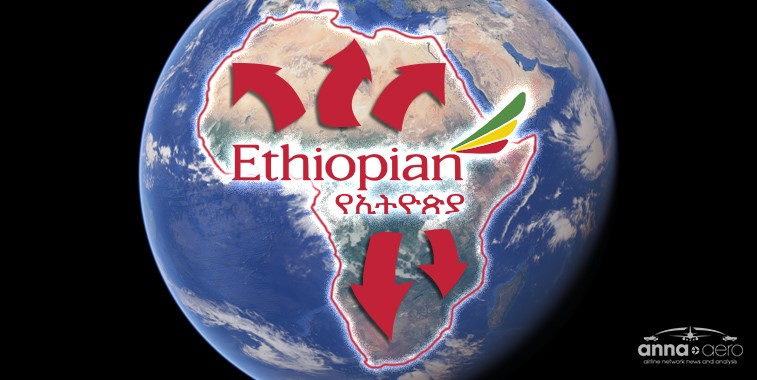 International routes within Africa see a 4% CAGR since 2015

Between 2015 and 2019, two-way seats within Africa grew by 19% to 112 million, a CAGR of almost 4%. Over the next 20 years, IATA expects African aviation to see about 5% growth each year, in part from the anticipated Single African Air Transport Market (SAATM). 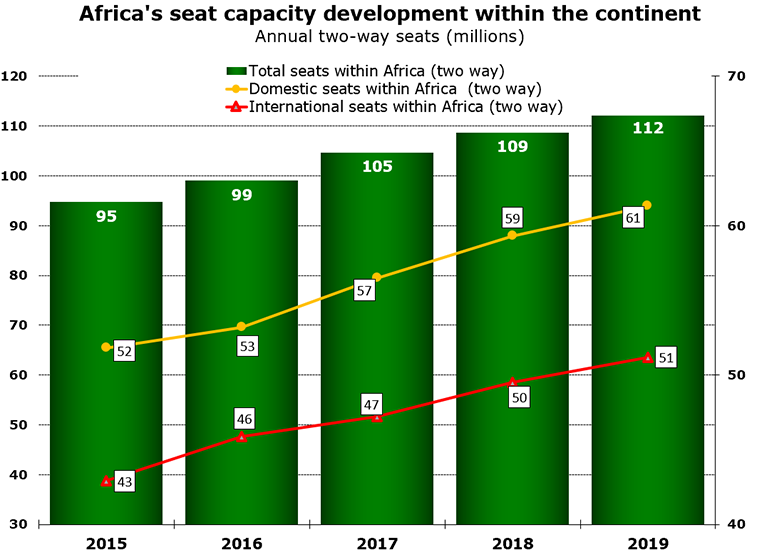 Since 2015, international capacity within the continent increased by over eight million seats.  While an unfair comparison, for context Ryanair added almost 46 million seats in this period.

Six airlines are responsible for 55% of international seats within Africa

Around 95 airlines operate internationally within Africa.  Yet only nine of these have one million or more seats a year, while 32 have 250,000+. 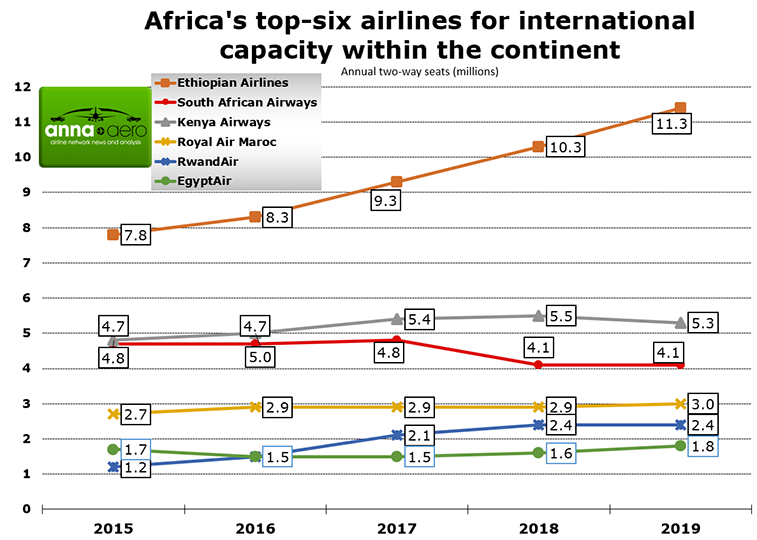 In 2019, the above six airlines deliver 55% of Africa’s international seats. On an individual airline level, Ethiopian Airlines has a 22% share of all seats, up from 18% in 2015. This is partly from the development of a third wave at Addis Ababa and a strong use of wide-bodies.

And the domination of these six airlines has been increasing almost YOY.  This is especially from Ethiopian Airlines and RwandAir, which together added 4.8 million seats – or almost 60% – of the eight million added continent-wide since 2015.  RwandAir stands out by doubling capacity since 2015.  While it remains small, it has strong ambition, and its potential partnership with Qatar Airways may enable it to become the second- or third-largest within Africa. 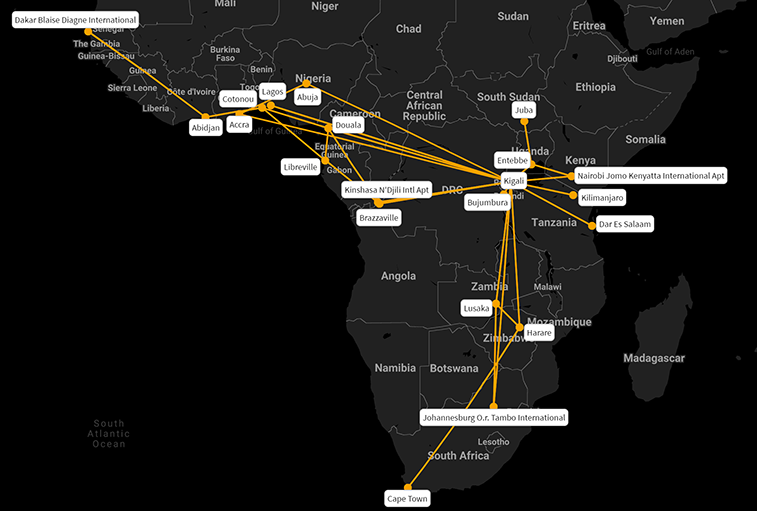 This is RwandAir’s route map in October 2019. It shows the importance of stops for the airline, something key for international services within Africa. It also highlights its Cotonou mini-hub. Source: OAG Mapper.

Mauritius – Reunion might not be the most obvious leader, but it wins by total seats. The two islands in the Indian Ocean are just 144 miles apart and flights have a block time of around 45 minutes.  It does vary, but normally two or more of the nine-daily are by wide-bodies, whether Air Mauritius A340-300s or Air Austral B777-300ERs.  The rest, naturally, tend to be by ATR-72s.

Mauritius – Reunion doesn’t win by frequency. With about 12-daily, Johannesburg – Gaborone, Botswana, does, helped by ~65 seats per sector from turboprops and regional jets.  On a continent-wide basis, intra-Africa services have an average of 123 seats per sector.  The interplay of costs, yields, load factors, and break-even load factors come into view.

20% of intra-Africa seats with one or more stops

Stops are important within Africa, with fifth freedoms available on many. This is an important way by which connectivity between African countries has grown and it will continue. In 2019, 20% of the 51 million international seats within Africa are from routes with one or two stops en route. There even remains a four-stop service. This is operated by Mauritania Airlines using a B737-800. It departs Nouakchott at 0700 and arrives Brazzaville at 1750 (one hour ahead, so nearly nine hours in all). It then departs at 1900 and returns to Nouakchott at 0400 the next day. 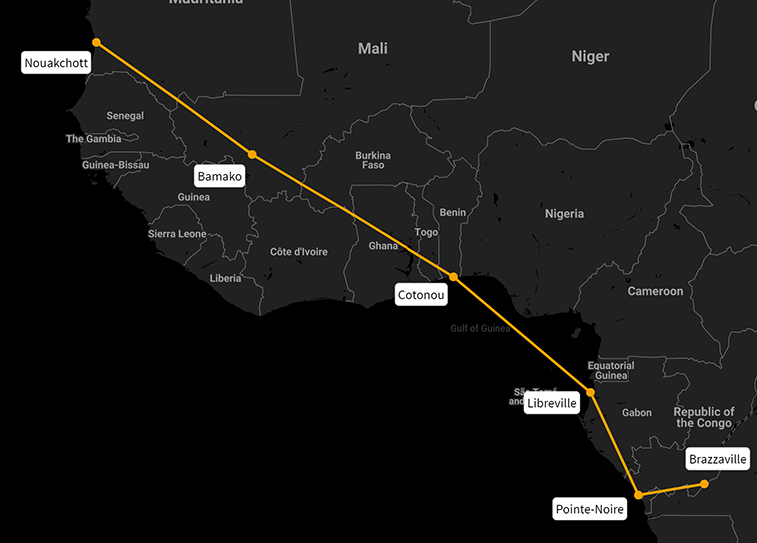 National airlines have become important again, with many starting or reviving in the past couple of years. These include Air Tanzania (2016), Air Senegal (2018), Tchadia Airlines (2018 with Ethiopian Airlines) and Uganda Airlines (2019). Others are said to be coming,  including an Ethiopian-backed new airline in both Ghana and Zambia, together with a new Nigerian operator: Green Africa Airways.

The involvement of Ethiopian Airlines is significant and growing. But then it is Africa’s largest and the strongest financially.  Undeniably, Africa needs more connectivity as a core part of its development, which would be helped by the implementation of the SAATM. It remains to be seen whether this materialises.