Capacity between the US and Cancun is down almost 9% in 2019 versus 2018, a loss of one million seats.  Both mainline and LCCs shed almost half-a-million seats each. This decline is from drug-related violence that killed over 500 in the area, although tourists weren’t targeted.  And a faeces parasite in mid-2019 that afflicted 14 didn’t help either.  Obviously, these things have impacted tourist confidence.

Yet between 2015 and 2018, capacity grew by a CAGR of 4%.  Of the two million extra seats, LCCs added 1.3 million. Southwest and Spirit Airlines were responsible for over three-quarters of this. 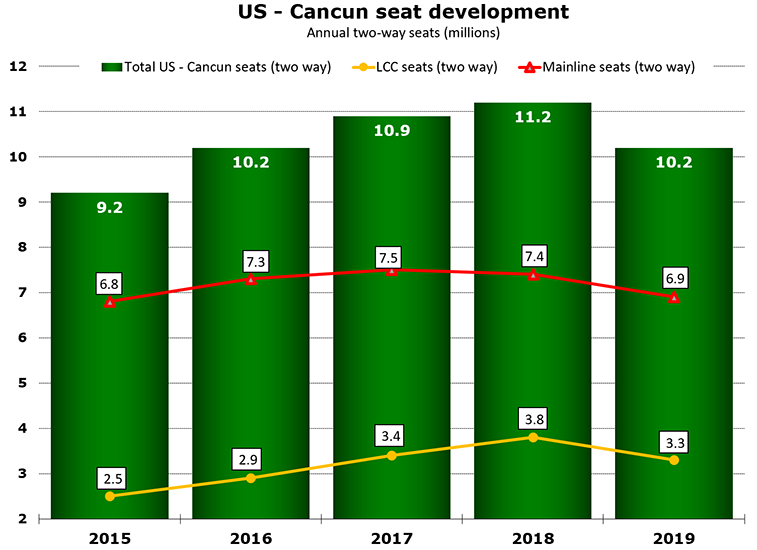 Spirit presently has six routes to Cancun from Baltimore, Chicago O’Hare, Dallas, Detroit, Ft Lauderdale and Houston Intercontinental. But it only has a small 6% share of the US – Cancun market.  Despite this, it has now overtaken hybrid JetBlue and it will overtake Frontier in 2020, unless Frontier increases capacity or launches new services.

Sprit will begin five additional routes to Cancun in early 2020. All are already served by between two and four airlines, generally seasonally.  Most have one-to-four-weekly frequencies per airline; the main exceptions are Austin with Southwest and Philadelphia with American.  Robust underlying demand, generally low non-stop frequencies and a myriad of one-stop options means high indirect passengers.

Opportunities remain in multiple other US cities

In the year to August 2019, 47 US cities had a median of 41,000 indirect passengers to Cancun, whether they’re already served with non-stop services or not.  Unsurprisingly, demand on most has reduced YOY, but nonetheless remain strong overall. anna.aero will look at US – Cancun opportunities in a forthcoming article.