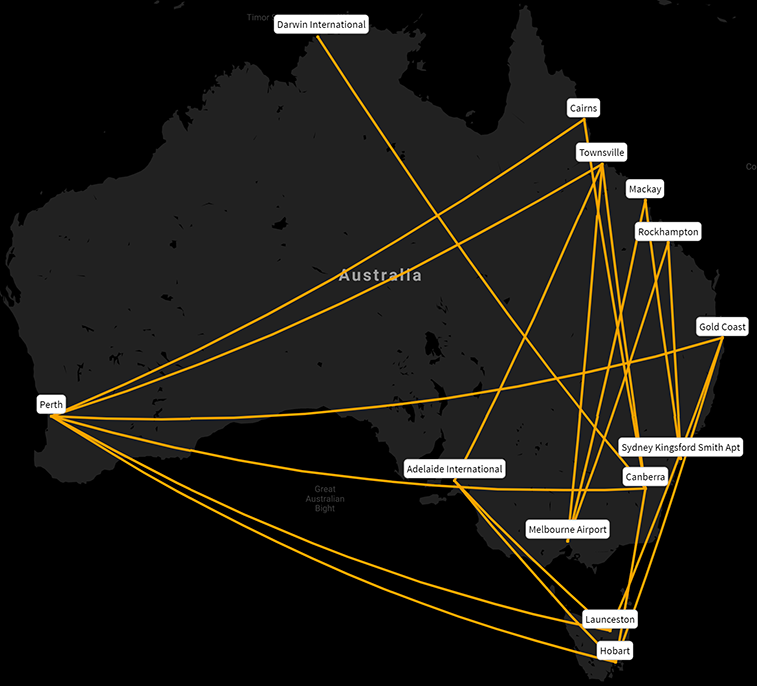 The top-20 domestic routes within Australia that are unserved or underserved by volume of indirect passengers. Source: OAG Mapper.

IATA’s 145th Slot Conference in Brisbane, Australia – running between the 12th and 15th November – is fast approaching.  So this is a timely opportunity to look at unserved and significantly underserved Australia routes.  This builds on other Australia articles around the recent World Routes in Adelaide: unserved routes to Southeast Asia and Australia – New Zealand.

Five million people flew indirectly within Australia in the 12 months to August 2019, flat YOY.  The top-20 unserved markets have just over one million passengers. It’s notable that Brisbane hasn’t even one route in the top-20. Its first, in twenty-second, is Karratha, long at 2,334 miles with 32,000 passengers.  It is mining-focused and has an average fare of USD$538 one-way, a fare per mile of USD0.23.

Table of the top-20 Australia routes

With 94,000 passengers, Adelaide – Hobart is the ‘most underserved’.  Jetstar is the sole operator with a four-weekly year-round service.  66% of Adelaide – Hobart passengers travel indirectly, clearly via Melbourne. Adelaide – Hobart benefits from the highest volume, one of the shortest sector lengths and a fare per mile only slightly below average.

Canberra, the Australian capital, stands out, including for its above-trend results irrespective of distance.  Canberra’s higher fares are from a greater proportion of premium traffic from government and corporate travel. The Gold Coast also stands out for the opposite reason and the strong penetration at the airport by Jetstar and Tigerair Australia.  Adelaide – Hobart underperforms by this measure. 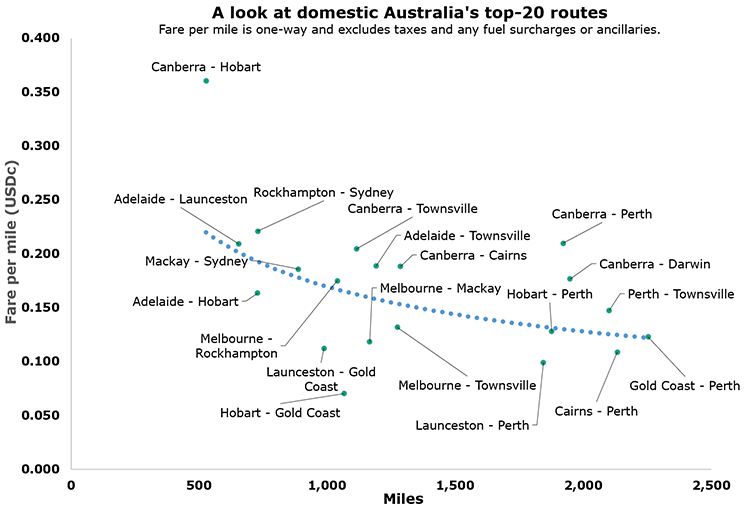 Canberra – Hobart has strong underlying demand and it is a relatively short route (527 miles).  It was served by Virgin Australia until 2013, but now it has a good average fare (USD$190) – like most from Canberra – and a very strong fare per mile.  And with connections via Melbourne adding 30% to the distance, perhaps Jetstar or Tigerair, if not parents Qantas or Virgin Australia, might serve it.

But therein lies the rub.  With 94% of domestic Australia sewn up between two groups, there has to be a very strong reason to launch routes that would otherwise simply flow via their hubs.