Ryanair’s eastwards focus is clear, with Ukraine standing out.  Ryanair serves five cities in Ukraine, and has 50 routes on sale to and from this fast-growing country for LCCs.  The emphasis on Ukraine is shown it being the carrier’s fourth-fastest-growing country, albeit from a low base.  Israel also 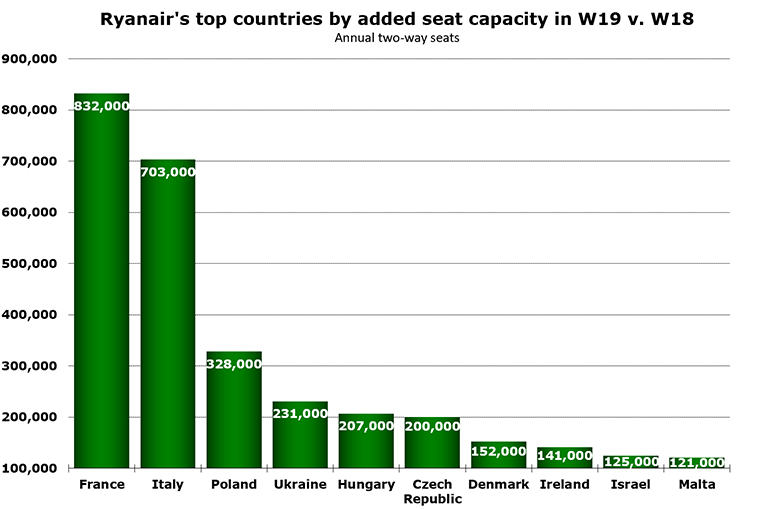 It is France – a large country by area and population and tourist appeal – that stands out.   This growth is mainly from Bordeaux (258,000 additional seats), Marseille (221,000), Toulouse (141,000) and Nantes (60,000).  While France has always been a significant country for Ryanair, the latest push was aided by both strikes in Germany and Germany’s ongoing pricing pressure, which led Ryanair to cut capacity YOY there. Frankfurt Hahn (135,000 seats down) and Frankfurt International (down 152,000) were especially hard hit.

This situation helped Ryanair in creating French bases in 2019. Bordeaux and Marseille became bases in S19 (Marseille used to be a base), both with two based 738s.  And in September 2019, Ryanair began its Toulouse base, also with two 738s.  These remain its only bases in France to date and, combined, they presently have 111 routes on sale – with a strong focus on Spain, Italy, Morocco (VFR) and domestic France. No wonder Volotea, which focuses heavily on France, is seeing increasing direct competition.

One interesting observation is Italy, an enormously important market for Ryanair with 29 Italian airports served in all and 14 bases.  Despite Milan Bergamo being the airline’s third-largest served airport, it nonetheless grew capacity by 11% – 232,000 more seats – in W19, with from 11 new routes this winter, including to Aqaba (Jordan), Tbilisi and Yerevan. Bergamo nicely shows Ryanair’s eastward push.