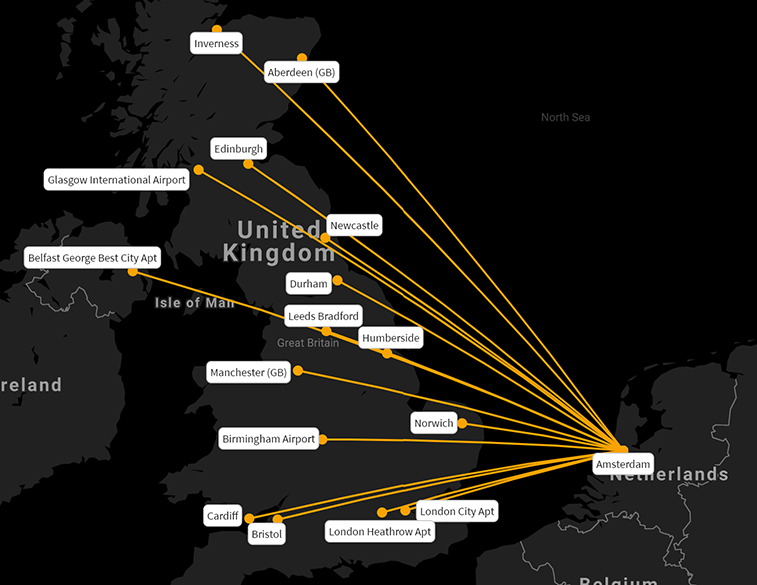 KLM and KLM Cityhopper now serve 16 UK destinations.  In all, 67 daily services are operated each way during the week, for an average of about four-daily.  This relatively high average is aided by six in ten flights being by the Embraer, especially the E190 (26/67).  The proportionality of regional jets to/from the UK has slowly increased over the years.  This is partly from the reintroduction of London City in 2017 – it is now up to nine-daily with KLM Cityhopper – and almost a third of flights at London Heathrow are by Embraers.

KLM’s UK – Amsterdam passengers are split almost equally.  In the year to September 2019, an estimated 51%, or 2.2 million, connected over Amsterdam, while 49%, 2.1 million, were P2P.  Of course, the proportions vary enormously by UK airport. Humberside, in Lincolnshire, has KLM’s lowest proportion of P2P passengers, at about 30%: an estimated 42,000 against 96,000 connecting.  KLM’s top-three connecting destinations from Humberside are Billund, Copenhagen and Aalborg.

About 353,000 connected from the UK to Asia. By far the most, around 1.3 million, connected across Western Europe, with Germany, Norway and Denmark KLM’s top connecting countries from the UK.  Birmingham’s lack of Scandinavia services is highlighted by through passengers and extends to capital cities and more. Edinburgh – Billund is 712 miles via Amsterdam and 487 non-stop. In full-year 2018, and across all airlines, it had 24,000 indirect passengers.  It was Edinburgh’s second-most unserved European route – until Ryanair started it twice-weekly.  Yet, KLM still has 10,000 passengers on it, from Ryanair’s seasonal service, low frequencies and business demand.

How the UK fits into KLM’s waves at Schiphol

KLM has five clear waves at Schiphol each day. The following highlights KLM’s UK-Amsterdam and Amsterdam-UK services and how they fit into its global network.  London City stands out. Not surprisingly, it has one of the highest proportions of P2P passengers at nearly 80%, but connections are important in volume: an estimated 107,000.  But because of no early-morning slots at City, its first arrival into Amsterdam is 1000 – against 0800-0900 for most UK routes. As such, it cannot feed one of KLM’s largest departure banks.