Sun Country’s transformation to a ULCC is continuing apace.  It is fighting for survival.  It has changed in many ways, including fare structure, ancillary options to drive revenues, updated aircraft cabins, and embarked on fleet and fast network expansion, including Hawaii and across the Caribbean. 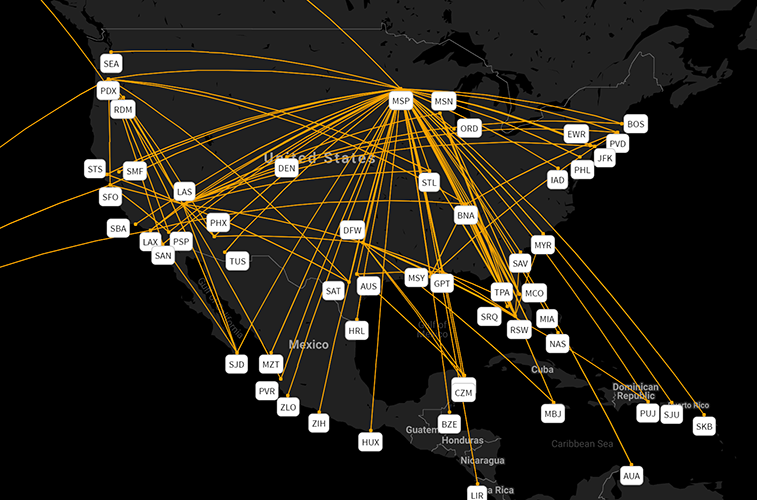 Sun Country’s routes in all of 2019. May include some airports, such as JFK, that are no longer served. Routes out of the image are to Honolulu and Anchorage. Source: OAG Mapper. 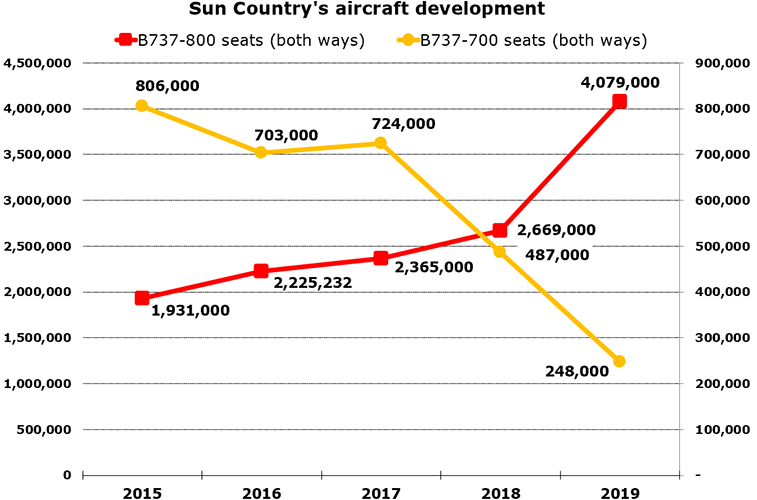 Like Allegiant – where Sun Country’s CEO worked for ten years – it focuses only on routes and times that make sense.  This reduces daily utilisation, which obviously isn’t so important for aircraft with lower ownership costs, but believes it has a positive impact on RASM.  The utilisation – CASM – RASM – LF balancing act is very interesting.

Sun Country expects to achieve CASM of six US cents or less, excluding fuel.  If it does, it’ll be competitive with Spirit and Allegiant, although this is before being stage-length-adjusted.  Its focus will then shift to RASM and TRASM. While scale is key to ULCCs, Sun Country doesn’t expect to be large: it anticipates about 50 aircraft.

Sun Country grew very shallowly between 2015 and 2018, adding just over 400,000 seats.  No surprise given its background.  2019 marked a clear change from large network growth and additional aircraft. The declining focus of Minneapolis (MSP) is clear, at least on a percentage basis, especially since it embarked on its ULCC strategy in 2017. 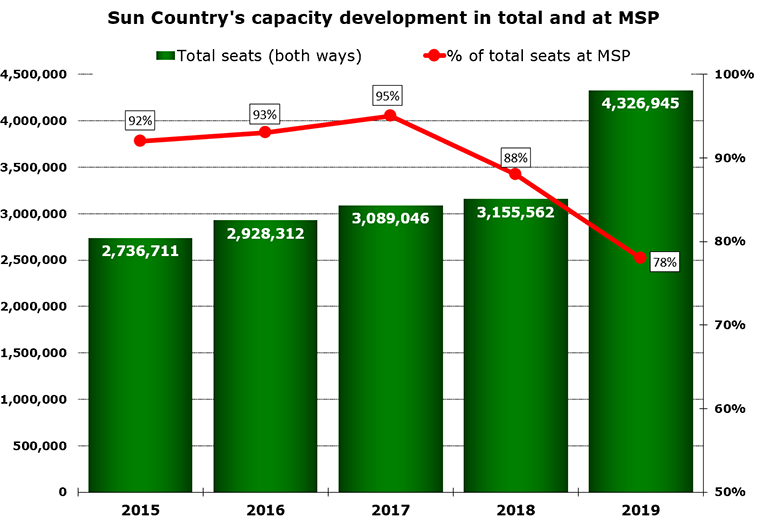 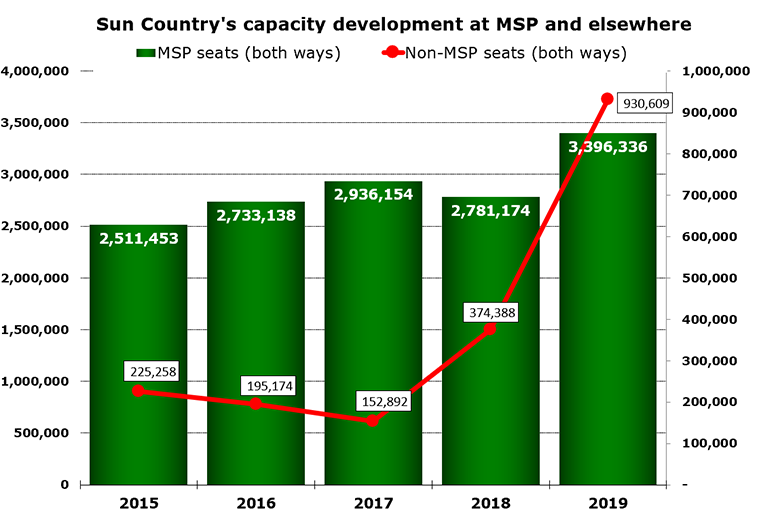 Leisure travel and those working for small and medium enterprises – so are price-conscious – remain Sun Country’s focus, as reflected in its top-10 routes.  The inclusion of major cities is not surprising.  San Francisco, for example, saw 26 million visitors in 2018. Sun Country’s seats to Florida and Nevada have more than doubled since 2015, and now total 1.5 million – one-third of the airline’s total, up from 23% five years ago. 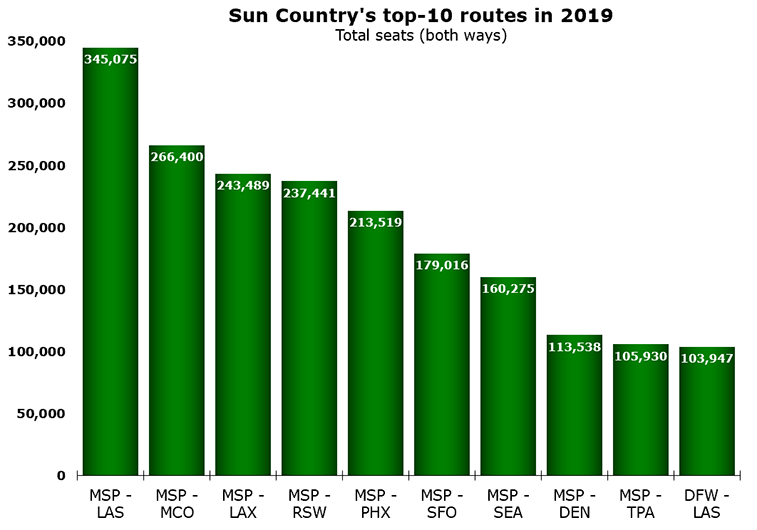 The most notable differences in Sun Country’s airport network is the end of New York JFK – once the airline’s second-most served airport, with Newark now served; the decline of Cancun amid wider problems there; and Boston’s cuts, from both a big frequency decline and from becoming summer-seasonal. The primary gainers have been Las Vegas (12 routes in winter 2019), Nashville (four) and Phoenix (four).  Nashville only came online in 2018. 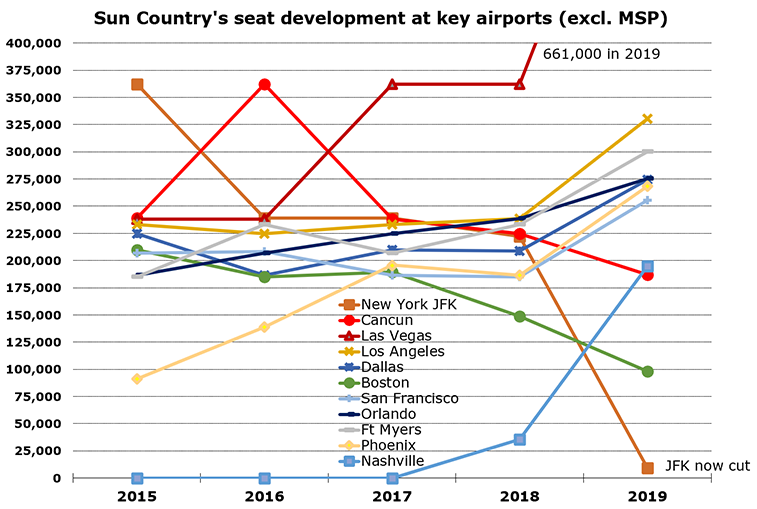 Like many ULCCs, Sun Country often announces numerous new routes at the same time.  Yesterday was no different, with 12 more.  And, like Frontier, Spirit and Allegiant, it is increasingly focusing on low frequencies and seasonal service. It focuses on the absolute soft underbelly of major markets.

Following Sun Country’s transformation to a ULCC, it has seen many complaints.  But it’d see complaints of an entirely different nature if it didn’t change in a significant way.