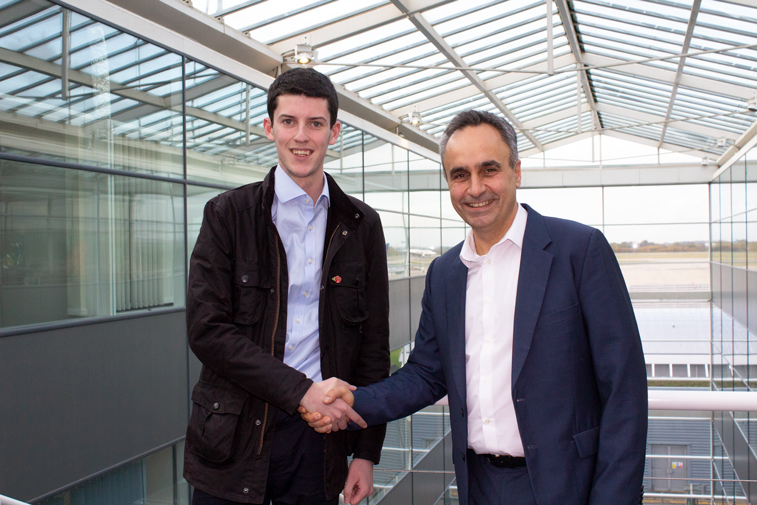 anna aero’s James Davis meets London Stansted CCO Aboudy Nasser. One of the most exciting highlights was learning how STN is evolving from the traditional MIDT data used by the industry since the 1970s to IP-based data to pinpoint real bookings and searches for a more powerful model of the airport’s catchment area and individual passenger demands.

For many years, London Stansted has been famous as Ryanair’s fortress; the LCC’s single biggest base.  The airport has been attractive to LCCs through a bespoke facility created virtually from scratch in the 1980s, competitive fees and plenty of runway capacity in a city where the four other main airports – City, Gatwick, Heathrow and Luton – have severe slot limitations. But, overall traffic growth didn’t reflect this potential, especially considering a two-hour catchment of over 25 million people.

Aboudy Nasser, CCO London Stansted, explained: “When we acquired the airport in 2013, passenger numbers had hovered around the 18 million mark under BAA. Over the last five years, we have been a disruptor not just in London but by Europe-wide standards, growing to 200 destinations and 28mppa”.

He adds that “we have the opposite challenge to most London airports. At peak times we can be terminal, not runway, limited. So, we’re investing in unlocking more space and using technology to enable any passenger to have a seamless transfer. We will be responsible for handling that.” This will cut out the need for multilateral airline agreements and could enable a passenger flying from Cork on Ryanair to connect via STN onto an Emirates flight to Dubai.

Only 2% of STN capacity long-haul, yet 50% of UK long-haul searches in catchment area 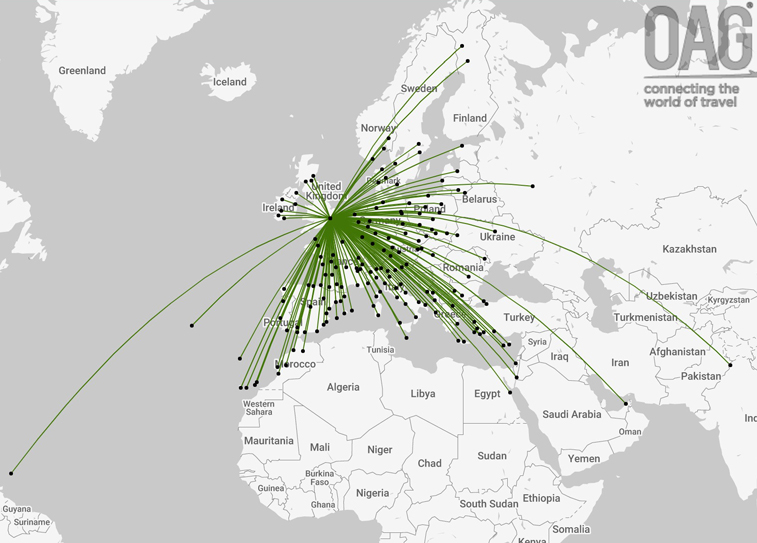 Looking at the airport’s W19 route network, short-haul is responsible for almost all of Stansted’s portfolio, with the airport’s two long-haul routes (Amritsar and Dubai) only launching in the past year. Out of 5.7 million seats in W19, just 2% are long haul, yet this is more than double W18’s long-haul capacity.

One innovation which has unlocked Stansted’s recent growth is the use of individual IP-based booking data, which maps locations of searches. In a recent study, Nasser notes that “over 50% of searches for long-haul flights in the UK were originating in Stansted’s catchment area.” 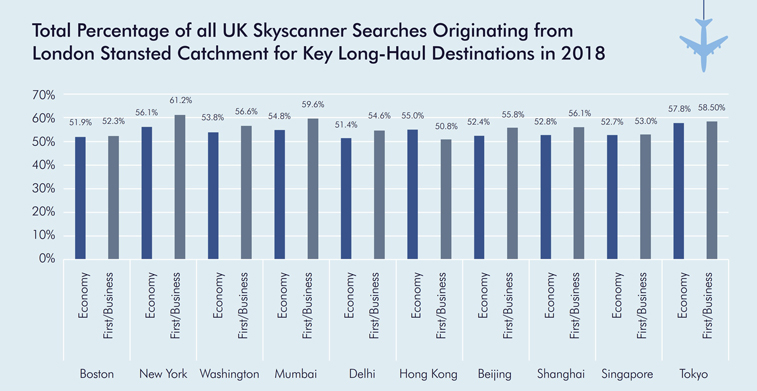 Source: London Stansted Airport ‘Gateway to Growth’ report. A standout is business/first class searches accounting for a greater percentage of the total than economy; demonstrating strong premium demand from the UK Innovation Corridor (between Cambridge and North London) which is home to Pharmaceutical and tech firms with over £1bn turnover like AstraZenica, GSK, and Google.

“This provides a strong business case to sell to airlines [compared with MIDT data] as we can show detailed information on searches/bookings for particular routes, by area. Unlike MIDT, we can see this data for LCC searches too”, says Nasser. He quips that “we’d be able to work out which street address had the most demand for a route and launch a campaign there.”

This paid dividends with the Amritsar route (see last week’s launch video above), as STN’s management “demonstrated specific VFR demand for the service – with a large Sikh diaspora in the catchment area who sought a connection to Amritsar – and presented the business case to Air India”.

A paradox of Stansted is the premium nature of its catchment, despite the overwhelmingly LCC make-up. As such, long haul leakage has been significant in recent years.  Over 1.6 million – nearly a third – of all annual London to New York passengers originate from Stansted’s 2h catchment area. For business/first travel, 80% of London to Tokyo demand is leakage from Stansted’s catchment.

To Dubai, Nasser highlighted that “average fares are higher than from Heathrow or Gatwick, and the route was chosen by Emirates to debut their new First Class product.” He added that “we see strong feedback already from Air India on the Amritsar route…I wouldn’t be surprised if we see additional frequencies [beyond the current thrice-weekly.]” 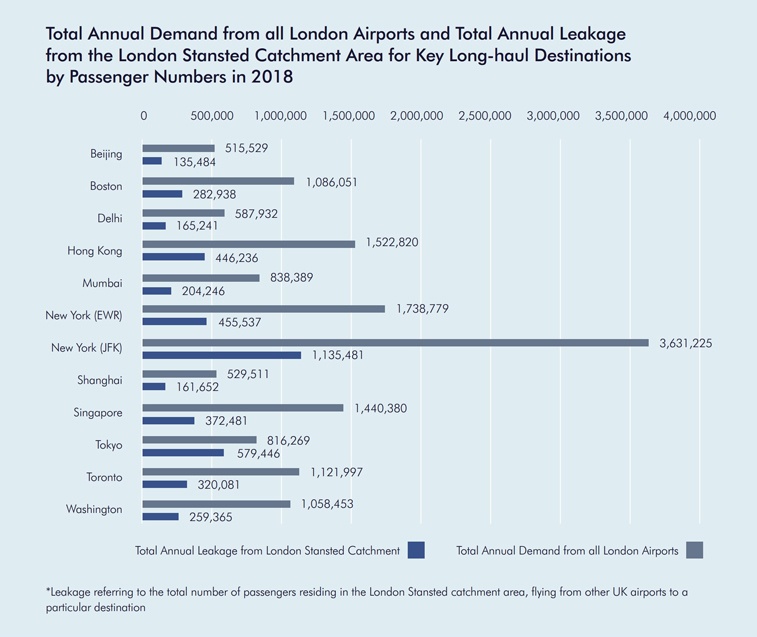 Despite the airport’s short and medium-haul portfolio, Nasser concedes there is still more to be done. “Under 6 hours, I’d like to see more flights to North Africa and the CIS states,” he explains.  “On the long-haul, we’d be looking at destinations that fit our UKIC “unicorn” ($1bn+) companies, like Boston [282,938 annual leakage] and its Biotech industry, Bangalore and Shanghai [161,652 leakage].”

Certainly, with the success of Dubai, and the demographics of Stansted’s catchment, there is strong unfulfilled long-haul demand to be unlocked in the next few years.

Why not click here for our exclusive interview with Julian Carr, Manchester Airport’s Aviation Director, to see how they are set to create a ‘hub of the north’ with Virgin Atlantic and flybe (Virgin Connect).