Colorado is the US’ eighth-largest state by area and twenty-first by population.  Its population in 2018 – 5.7 million – grew by over 13% since 2010, the result of economic growth and an influx of millennials.  Renowned for its low population density, over half of the state – about three million – live within Denver’s metropolitan area.

All of the US’ 48 contiguous states fall within a 2,000-mile – or about four-hour – radius of Denver International, together with all of Canada and Mexico and a large chunk of Central America.  Denver sits astride various key traffic flows, most notably the broad east-west US and central-west US. 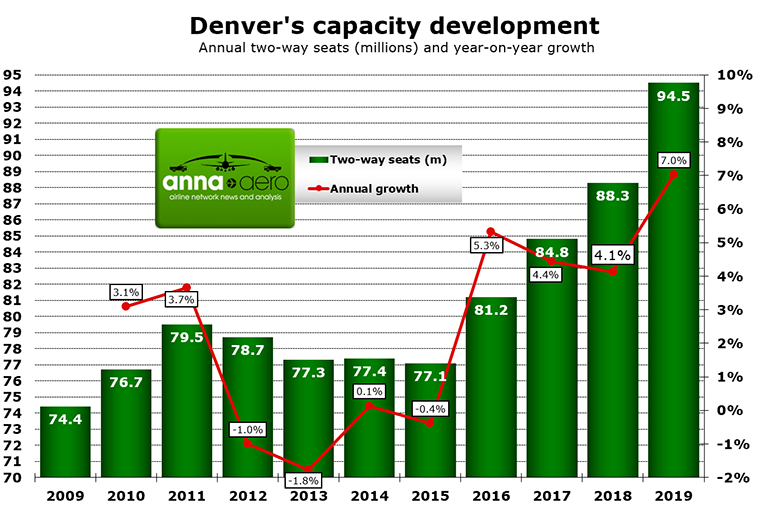 While these ten years saw a CAGR of 2.4%, the period since 2015 saw almost double that.  17 million seats were added between 2015 and 2019.  United contributed nine million seats as part of its plan to strengthen its mid-continental hub. Since 2018, United has added 32 domestic and international destinations from Denver. The figure, below, shows the capacity development of Denver’s key airlines. 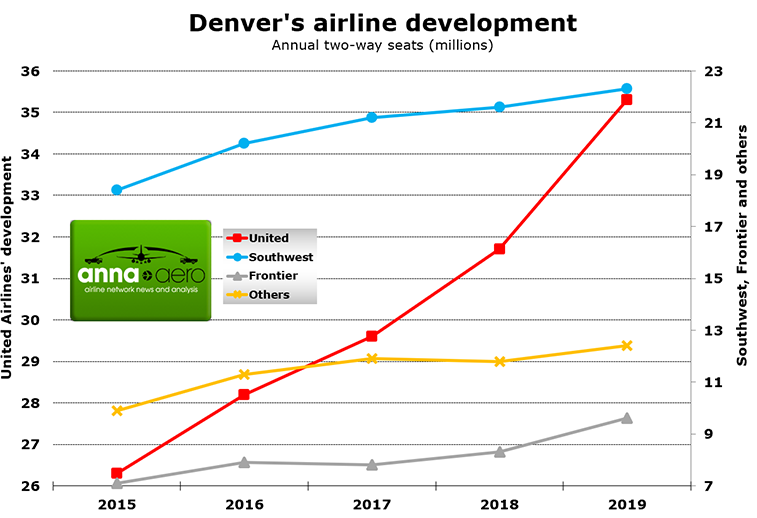 In November 2019, United has 462 daily departures from Denver.  This is against 290 for the second-largest operator, Southwest, and 73 for third-placed Frontier.  United, Southwest, and Frontier account for around 84% of Denver’s total capacity, pretty much static over the past few years.

About 96% of Denver’s total capacity is domestic, but the airport has added numerous new international services in the past few years, including Calgary (WestJet), Grand Cayman (Cayman Airways), London (United; a resumption), Paris (Norwegian), Panama City (Copa), and Zurich (Edelweiss).  In summer 2020, Norwegian will begin seasonal service from Rome Fiumicino.

In November 2019, Denver has 204 routes in total, of which 183 are domestic.  United alone has 160 routes and 147 domestic. The map, below, highlights the airport’s domestic routes. 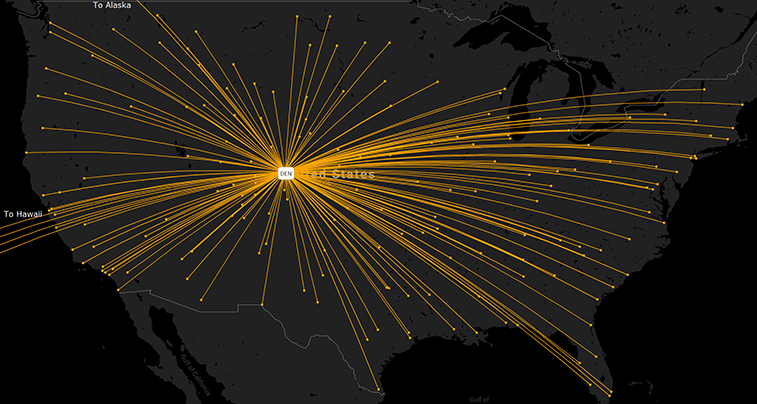 At an airport-level, Denver’s top-10 routes this month have 173 daily departures. Los Angeles and Minneapolis have six airlines competing, against four for most others.  Because of Frontier’s hub at Denver, almost all of the top-10 have at least one ULCC. Fellow ULCC, Spirit, serves Los Angeles, Las Vegas, Minneapolis, Dallas, and Chicago of the top-10.

Denver is partway through a $1.5 billion expansion plan that will see 39 additional gates added, among other developments, which will help to transform and futureproof the airport. It’ll be very interesting to see how the airport grows in the next few years and which airlines benefit most.