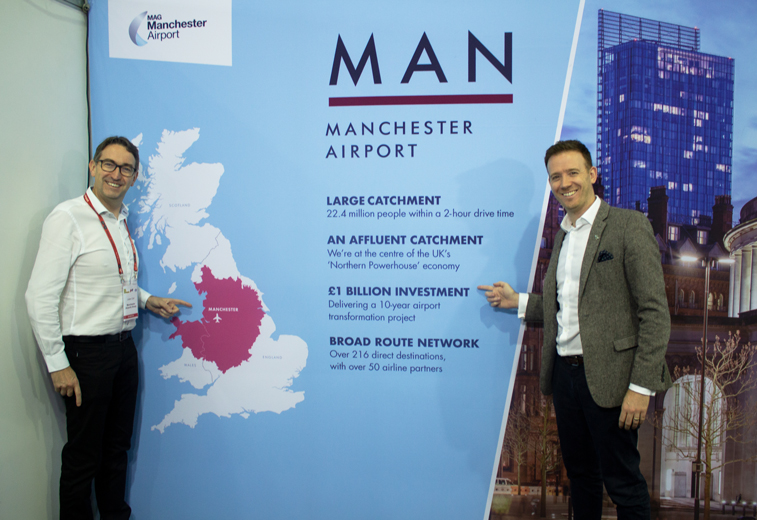 Manchester Airport’s Julian Carr, Aviation Director, and Robert Smith, Head of Aviation Development, heroically battle through the jetlag 10,000 miles away from home at IATA Slots Conference in Brisbane, to outline Manchester’s ‘hub of the North’ plans.

“Thomas Cook accounted for 3 million annual passengers prior to September – two-thirds short-haul and one-third long-haul.”  Since September, our focus has been on backfilling this capacity. Jet2 acquired many short-haul slots, but long-haul is naturally more challenging,” explains Julian Carr, Aviation Director at Manchester Airport.

This gap will likely be filled by Virgin Atlantic’s expansion at Manchester.  The airline is adding more flights to Barbados, Las Vegas and Orlando in S20, and the establishment of a “flag carrier of the North” hub.  flybe – soon to become Virgin Connect – is set to adjust its schedules to feed Virgin Atlantic’s expanded network. 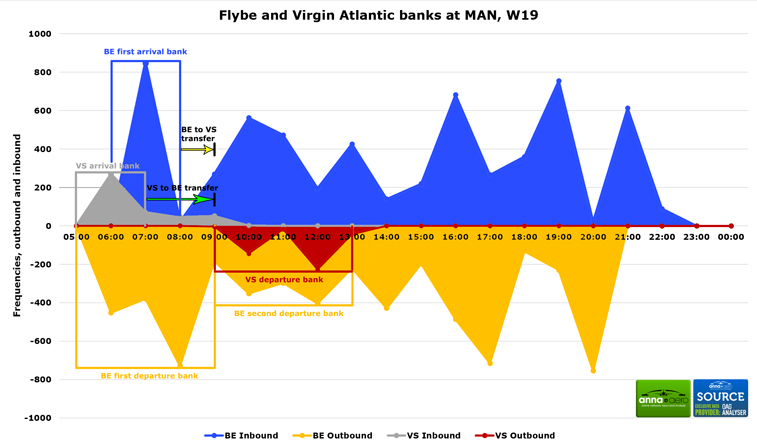 Whilst Virgin Atlantic and flybe’s operations at Manchester differ significantly in scale and timings, the schedules do partly complement each other pre-merger, at least in the morning. flybe’s first bank of arrivals occur between 0700-0800, before Virgin Atlantic’s first departure bank at 09:00-11:00. flybe’s second bank (mainly 10:00-12:00) could feed Virgin’s long-haul business departures (Atlanta and New York, mainly around 12:00). The green arrow indicates a long minimum connection time of at least two hours, whilst the yellow represents a short MCT (between one and two hours).

To facilitate Manchester Airport’s plans, the Terminal 2 extension/connection facilty, part of its £1bn transformation project, will open in S20 and completed in 2022. With flybe (terminal 3) and Virgin Atlantic (terminal 2) currently located at opposite ends of the airport, we would expect to see some co-location occur over the next few years to enable seamless connections. 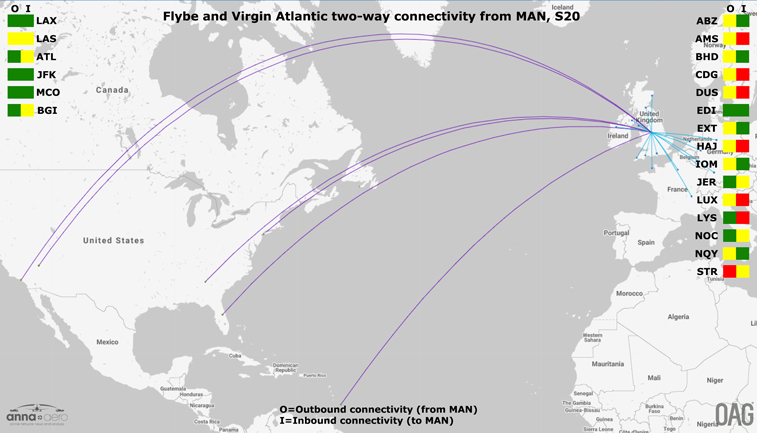 A look at how suitable flybe and Virgin Atlantic’s networks are in S20 to create a hub. Currently, Virgin’s long haul schedule is well timed to suit this model, with a strong outbound feed from flybe’s traffic into Manchester, and similarly provides a good inbound feed to flybe’s European network. However, flybe’s own network is a mixed picture. European hub destinations are not generally well suited, as they have sufficient long haul networks of their own. Other non-hub UK/European cities (e.g. EDI, BHD) provide a well-timed feed, whilst others (e.g. JER, NOC) do not have a morning arrival into MAN that links with Virgin’s long haul schedule. In total, six flybe routes can provide a two-way feed to Virgin Atlantic’s network without major schedule changes.

On the network development side, Biman Bangladesh is launching three weekly flights to Dhaka in January 2020, a route last served in 2012, and Juneyao Air announced this week a three-weekly connection to Shanghai from March.

Robert Smith, Head of Aviation Development, outlined that Bangkok is Manchester’s top unserved long-haul route, with Shanghai second prior to Juneyao’s launch. “Delhi and Mumbai are now large unserved markets after Jet Airways ceased, with the airport looking at Air India and Vistara as candidates. Long-haul demand has been resilient from Manchester, despite external events, with Cathay Pacific, for instance, still posting 90% load factors and up-gauging seasonally to A350-1000s.”