India – Saudi Arabia is large, with an estimated 5.3 million passengers in the 12 months to October 2019.  It’s a market of pilgrims, labourers, and VFR generally.  This 5.3 million is down 12% YOY from Jet Airways’ collapse, which, of course, has offered opportunities, especially for LCCs. 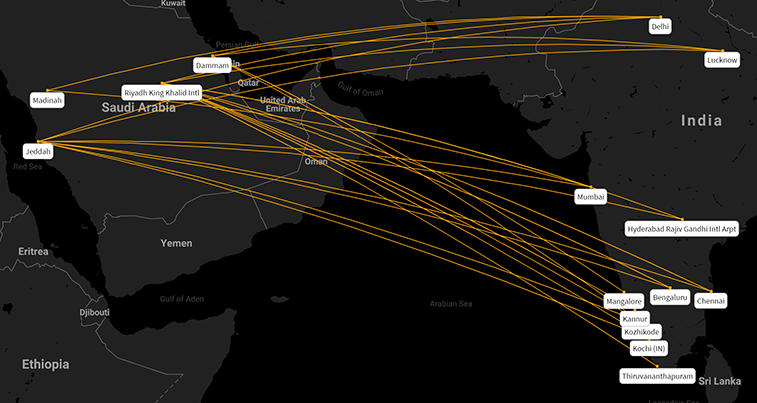 The impact of the bilateral restriction is clear.  Of these 5.3 million, only 2 million – or 38% – flew non-stop in this period.  Of course, this is just one contributing factor, and the loosened bilateral will still be restrictive.  (Surprisingly, the number-one connecting hub between the two was not Dubai, Abu Dhabi or Doha – but Muscat, with almost 500,000 passengers.)

The end of Jet Airways – even before the adapted bilateral – offered good opportunities.  Indeed, 2019 is the year for LCCs between the two countries, with 1.1 million seats – against 260,000 in 2018, the previous highest. This is mainly from SpiceJet and, to a lesser degree, IndiGo and Air India Express.  In W19, SpiceJet and IndiGo both have five routes to Saudi Arabia, and Air India Express four.  SpiceJet and IndiGo focus on Mumbai and Delhi.  Not just for P2P demand volume, but crucially for their onward connections across India.

Opportunities from the loosened bilateral

And here are the top-10 unserved routes between the two, totalling 769,000. Dammam features prominently as a result of not being backfilled by others.  Perhaps the loosened bilateral will enable its development, as well as more to Jeddah and Riyadh.