Cathay Pacific has been struggling recently as a result of the unrest in Hong Kong.  This has impacted its demand, yields, and traffic composition – not to mention its financial projections and network.  Although the Cathay Pacific’s capacity has been static for years.

As a result of the unrest, October 2019 RPKs for Cathay Pacific (and Cathay Dragon, combined) were down 3% over October 2018. RPKs to/from mainland China and Northeast Asia fell by a collective 28%.  As local inbound demand declined by 35% in October, the two airlines’ connecting passengers became more important, but with the lower yields that these bring.

Of course, connecting passengers have always been crucial for Cathay Pacific and subsidiary Cathay Dragon. (Hereafter just Cathay Pacific for simplicity.) An estimated 16 million connected with them in the 12 months to September 2019.

Its top-20 connecting routes are shown below. With around 57,000 two-way passengers, Dubai – Manila is its number-one connecting market, the result of around 500,000 Filipinos in Dubai.  This is despite nearly five-daily non-stops, including a daily Cebu Pacific. 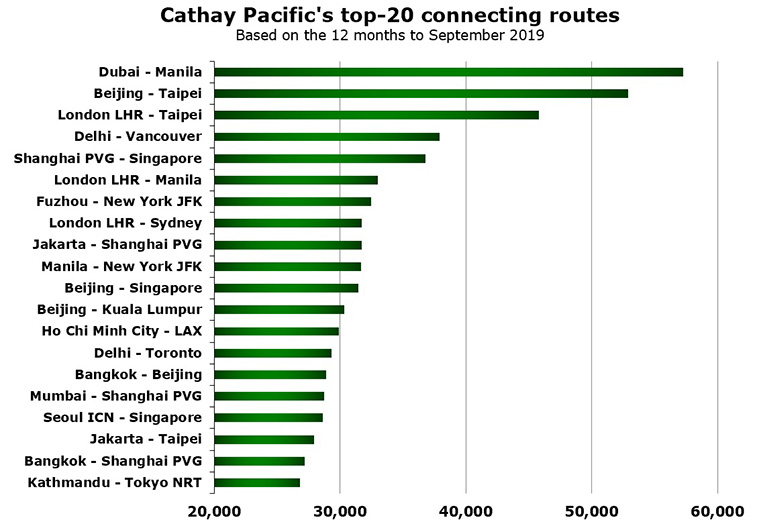 Mainland China features nine times in these 20, led by Beijing – Taipei and Shanghai PVG – Singapore.  Fuzhou – New York JFK stands out, with the Chinese city served twice-daily by Cathay Dragon using A330-300s. Xiamen Air operates JFK – Fuzhou three weekly on a non-stop basis using B787-9s. Across all airlines, Fuzhou – JFK had around 242,000 in the past year.  Up to 300,000 Chinese in NYC are Fuzhounese American.

It’s noteworthy that mainland China – Taiwan appears only once in the top-20. Yet, it’s still the airline’s number-one country-pair, showing that – despite non-stops – it is still very important for the airline.  While Australia – UK sees 150,000 connecting passengers, the top-20 country-pairs are dominated by China, India and the USA. 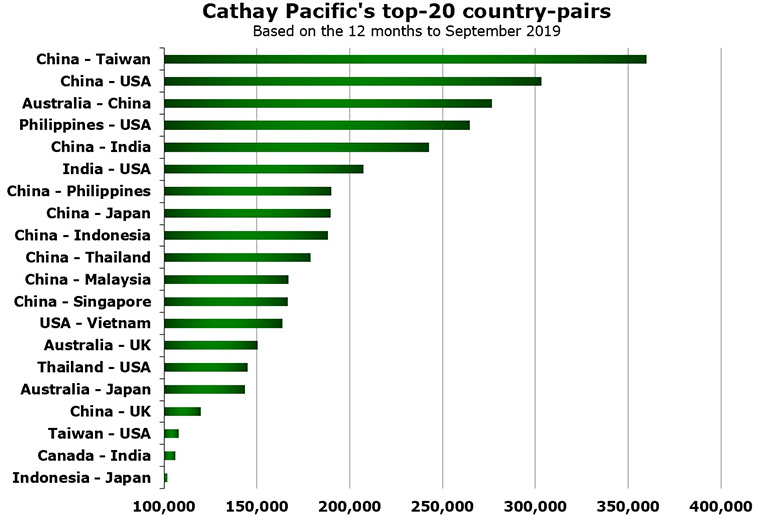