About 30% of the MEB3’s daily seats are to Europe. But all three diverge markedly by absolute seats, as the table shows. Emirates has nearly four times the seats as neighbour Eithad. Etihad has significantly fewer seats per European destination than Emirates and half its network size.

51% of Turkish Airlines’ international seats are to Europe

Turkish’s core market from its Istanbul Airport hub is Europe, with over half of its daily international seats.  This is not surprising.  It serves 98 European airports from its main hub aided by their closeness to market, strong P2P demand to Istanbul, the Turkish coast for tourism and Anatolia for VFR, and the airline’s large use of narrowbodies. 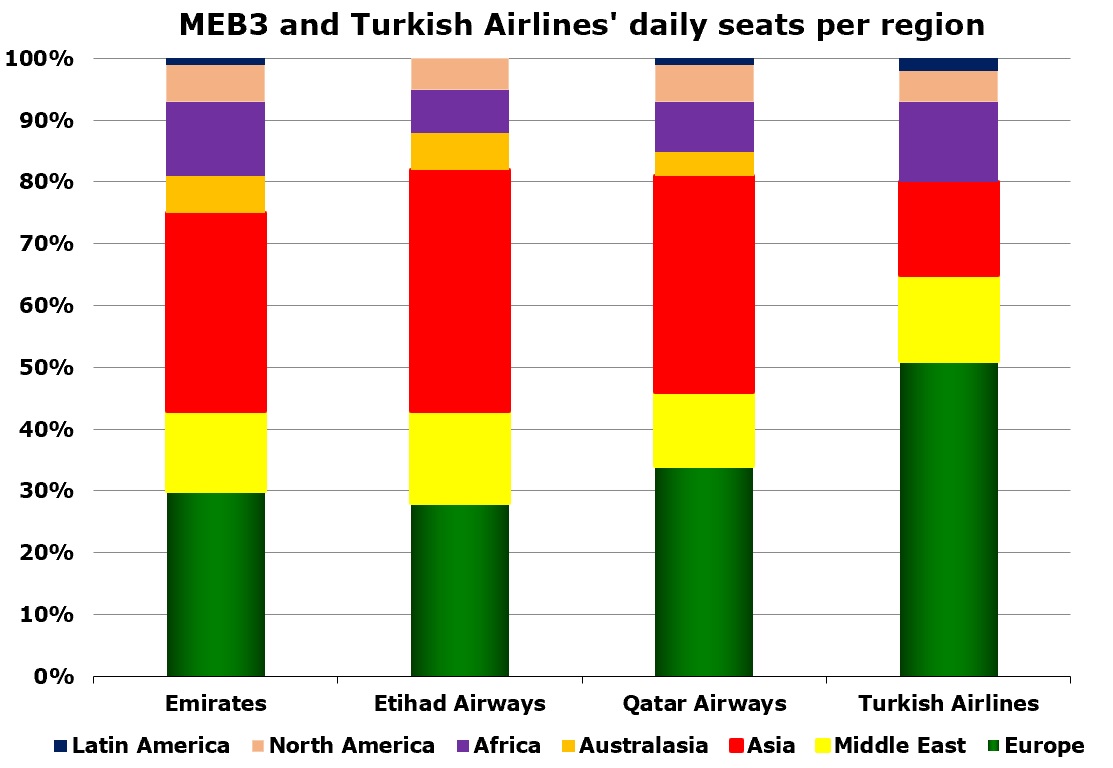 Source: OAG Schedules Analyser. Note: based on one-way seats in the week of 22nd November 2019; on international seats; and based only on Turkish Airlines’ Istanbul Airport hub. Of course, results would be different if Sabiha Gökçen and the airline’s domestic operations were included. But for fairer comparability, only international and one hub is included.

Asia rules for the MEB3

Asia is the largest continent for MEB3’s total daily seats, with between 32% (Emirates) and 39% (Qatar Airways). By comparison, just 15% of Turkish’s seats are to Asia.

Emirates has over three times the seats to Asia

Emirates has over three times the seat volume to Asia than Turkish, especially to South Asia.  Only Etihad comes close to Turkish’s seats, although the latter serves more Asian destinations (36 against 30). Turkish Airlines excels in Central Asia.  Neither Emirates itself nor Qatar serve Central Asia, while Turkish has seven destinations.  Central Asia represents only 14% of Turkish Airlines’ Asia offering, and only Almaty, Kazakhstan, sees a widebody: a daily A330-300.

Asia has only 19% more daily Turkish’s seats than Africa.  Africa is a growing part of Turkish Airlines’ network, with over 50 airports served. Its use of narrowbodies and one-stops accounts for higher frequencies than to Asia. Turkish Airlines sees underserved opportunities in Africa with often stronger yields than elsewhere – and, crucially, often with the chance to dominate markets. It is also more strategically placed than the MEB3 to serve more of the overall Europe – Africa market.