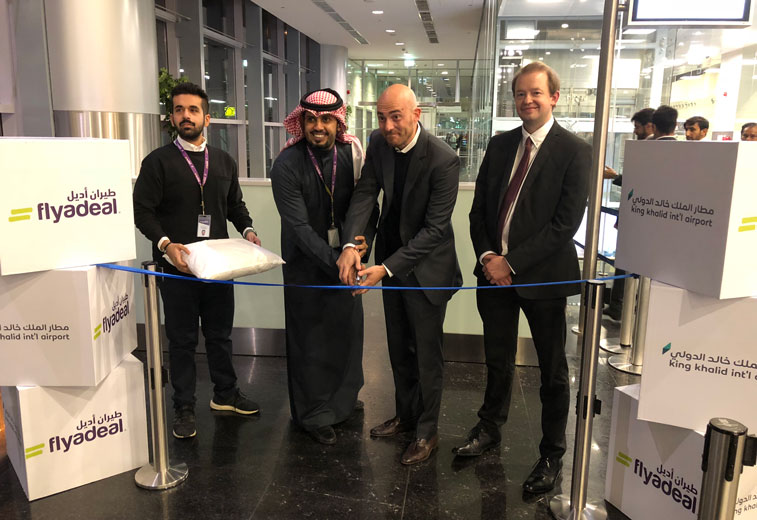 Flyadeal celebrated the launch of daily services between Riyadh and Yanbu this week, with the Saudi Arabian LCC inviting anna.aero’s James Pearson (right) to attend the launch. Cutting the ribbon was Abdulrahan A. Alshehri, Flyadeal Airport Duty Manager, Riyadh (second-left) and Jacopo Tonucci, Aeronautical Business Development Director, Riyadh Airport (second-right). Pearson said, “It is great to see Saudi Arabia beginning to open up as part of its Vision 2030.  With 14 A320ceos and 30 A320neos on order, Flyadeal is developing nicely, with its first international destination coming soon.” Air Seychelles celebrated the launch of weekly Mahe to Tel Aviv services in some style with a route launch bake-off competition. Some of Tel Aviv’s top pastry chefs battled it out, until the winning cake was selected by a panel (image 2) including: Dov Kalmann – Air Seychelles PR based in TLV; Estella Belfer, Master Baker; Christine Ozouf, HM head of sales for Europe, Israel and North America; Ari Goldstein, Seychelles Honorary Consul to Israel; Charles Johnson, CCO; Remco Althuis, CEO HM and Esme Kann, CEO’s partner. Commenting on the event, CCO Charles Johnson said “we reached out to local bakers in Tel Aviv. The challenge was to come up with the best possible cake to feature at the launch…and to enter into anna.aero’s cake of the week contest!” Congratulations to the winning baker Liraz Malka, and all the team at Air Seychelles for a worthy cake of the week win!

On 27 October, Air Seychelles launched weekly services to Tel Aviv, alongside an interline agreement with El Al. Charles Johnson, Chief Commercial Officer at Air Seychelles, explained that “El Al already operated seasonal charter flights twice-annually to Mahé.  We approached them because we felt we it could sustain a scheduled weekly year-round service with our A320neo.”  El Al’s extensive European network is expected to provide a strong feed to the route. 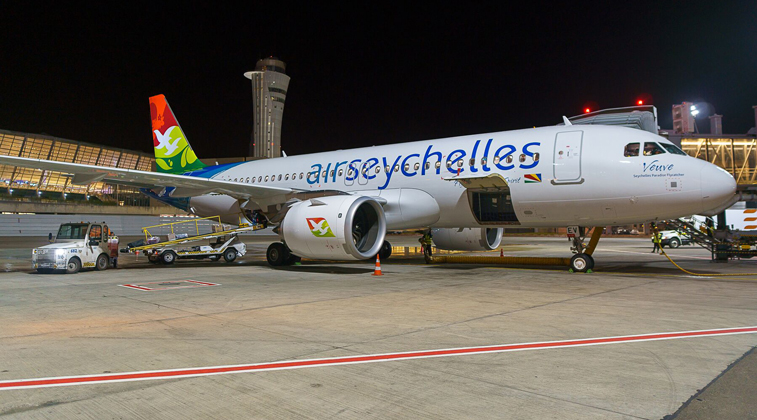 Air Seychelles’ first A320neo on the ramp in Tel Aviv. CCO Charles Johnson revealed that the route will be upgraded to twice-weekly in July 2020.

This comes as the airline reevaluated its long-haul strategy, removing the last widebodies from its fleet in 2018. Johnson revealed that Air Seychelles struggled to compete with the strong connecting traffic from some of the 15 carriers serving Mahé.

On the short-haul side, the carrier has carved out a successful niche, with strong O&D and connecting demand from Johannesburg in particular. Johnson noted that “we have benefited from the growing demand for ‘Safari & Sand’ holidays. Customers spend time in South Africa on Safari, before heading for some relaxation on the Seychelles beaches”. The carrier uses this to its advantage on its regional Twin Otter network. This consists of scheduled flights to Praslin Island, seeing traffic split 50-50 between connecting tourism and local demand. These operate alongside charters and wet-leases in summer.

With a second A320neo coming, Air Seychelles has an opportunity to right-size its network with one of the most efficient narrowbodies. This will also partly mitigate the range-payload challenges caused by the airline’s nearest diversion field being two hours away from Mahé. It is also continually improving feeds from interline agreements with 25 airlines.

What will be their next route? Johnson hinted that they are “studying other leisure-focused Indian Ocean island destinations”. Within six hours of Mahe, this could include the Maldives, reinstatement of Madagascar flights or perhaps a Sri Lankan route.

Until restructuring is complete in ~2023, Air Seychelles’ fleet is not likely to grow further.  However, it is assessing the A321XLR, which is already being ordered by the likes of United to boost long-and-thin route capacity, or those more in need of frequency. 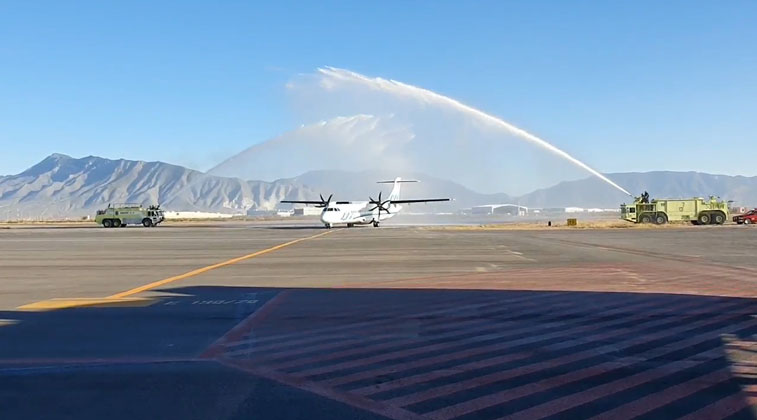 Aeromar’s inaugural service arrives into Saltillo on 03 December, amidst a spectacular mountain backdrop. 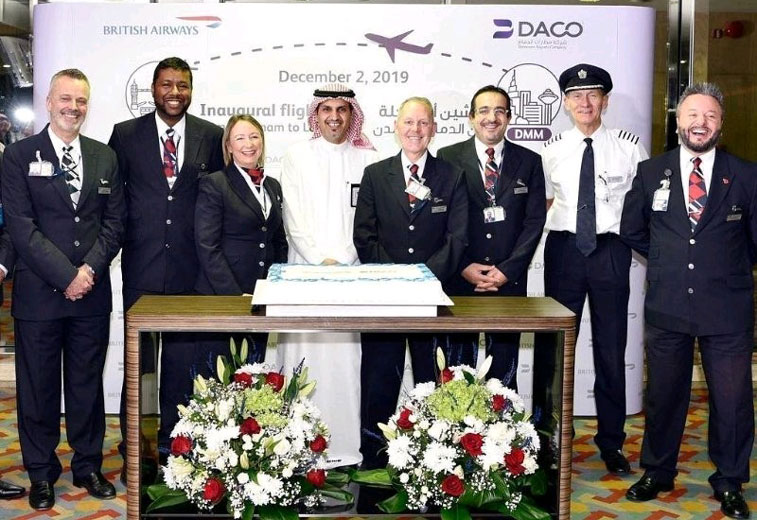 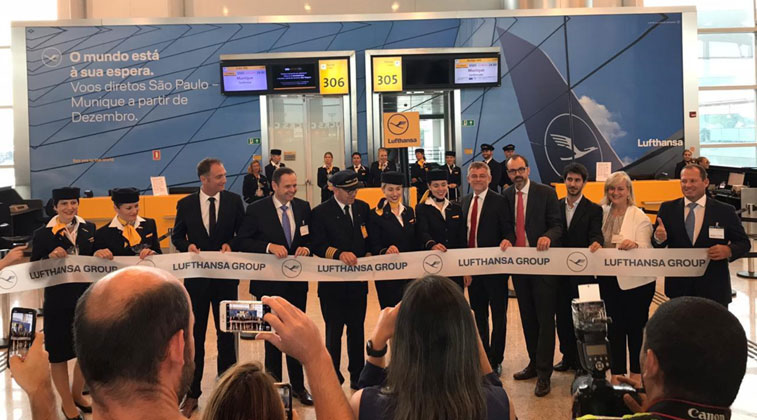 The Lufthansa team launch three times weekly services between Munich and Sao Paulo. The route is operated by an A350-900, with no other carrier connecting the two cities.

Lufthansa commenced services between Munich and Sao Paulo on 02 December. The route will operate three-weekly on Mondays, Thursdays and Saturdays with a 293-seat A350-900. Wilken Bormann, CEO Lufthansa Hub Munich, said: “The route offering is further proof of the positive development of Munich as a premium hub. For the first time, Lufthansa is operating the Airbus A350-900 to South America, the most modern and environmentally-friendly long-haul aircraft in the world”.

Munich has seen 47 months of continuous growth, with the main driver being Lufthansa’s long-haul hub at the airport, and two additional A380s set to join in 2020. In a recent interview with anna aero at IATA Slots in Brisbane, Melanie Fürsich, Director Traffic Development Asia Pacific & Southern Europe, revealed Munich’s other top unserved routes. These include Colombo (40,000+ indirect annual pax), Hanoi (30,000) and Ho Chi Minh City (30,000). Taipei is also on the horizon, but cannot be served until traffic rights issues are solved.