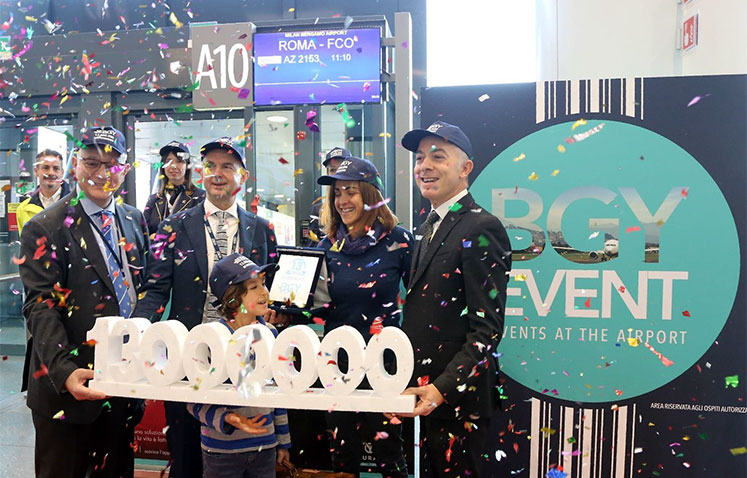 Endorsed by Milan Bergamo’s strengthening of existing flights, new carriers, and the expansion of route choice, the airport has welcomed extraordinary growth over the last 10 years. Links to capital cities have shown significant growth and notable demand this year – in particular, Rome with Alitalia, London Gatwick with British Airways, recently launched Cairo with Air Arabia Egypt, as well as Tbilisi and Yerevan (launching January) with Ryanair.

Today’s landmark was celebrated with an official prize-giving to Annabella Cremonte, a yoga teacher from Voghera (a city about 130-kms from BGY) departing for a holiday in India with her son, the lucky winner travelling with one of Milan Bergamo’s newest carriers Alitalia. Awarded a seasonal Christmas box loaded with theatre tickets, museum tickets, hotel vouchers, a year’s lounge access and other gifts, Annabella was also presented with a commemorative plate to mark the airport’s significant milestone. With almost a month still to go before final numbers are calculated, Italy’s third-busiest airport expects to reach the record result of close to 13.7 million passengers by end-December.

Speaking at today’s celebrations, Giacomo Cattaneo, Director of Commercial Aviation, SACBO, said: “This is such a proud moment for Milan Bergamo Airport, speaking volumes for the hard work and dedication of the whole team here. We are committed to meet the demands of our catchment area and beyond, seeking new destinations while continuing to invest in the future.” Cattaneo added: “Lucky 13 is a memorable moment for our airport and we’re forecasting continuous robust growth for years to come.”